Last flight from Bangkok, Thailand, to Narita, Tokyo in Thai international business class! This flight is the world’s largest 2 story airplane “A380”, so my heart is pounding!

It’s rare to see the A380 in Japanese Airways. In this article, we will focus on business class seats and facilities. 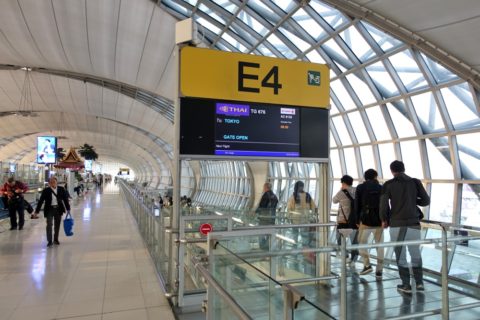 This flight is Thai Airways TG 676 which departs Bangkok Suvarnabhumi Airport at 8: 00. It departs from Gate E4. This gate is isolated, but there is a toilet in the waiting room, so you don’t have to worry!

The aircraft for this flight is A 380. It’s a 2 story jumbo jet that is also famous as “the world’s largest passenger plane”! Just looking at the seat map is overwhelming.

The demand for the A- 380 is quite high, as it is being used from Tokyo to Bangkok where there are many flights per day. 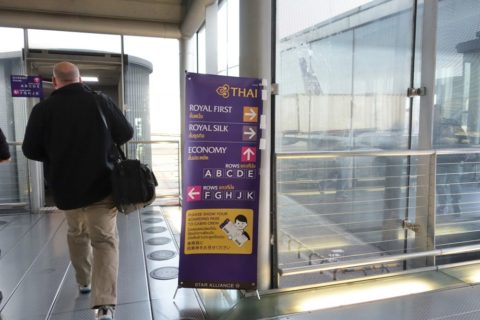 Staggered seat of A380 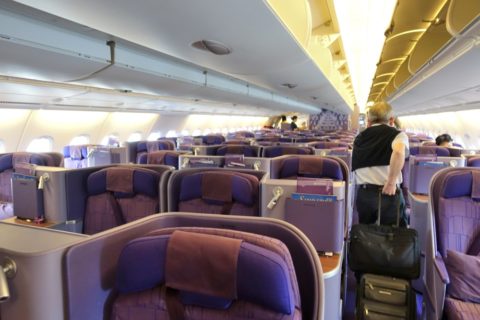 Business class is 1-2-1 staggered seats. There are 60 seats in total in the middle of the 2nd floor seats, but it was almost full on this day!

My seat is the first 12 k on the left. Like the A 350 that I got on from Frankfurt, I got a seat with a window seat and a feeling of a private room!

The purple seat is also the trade color of Thai Airways. Although it is the same staggered type as the A 350, the details seem to be slightly different. 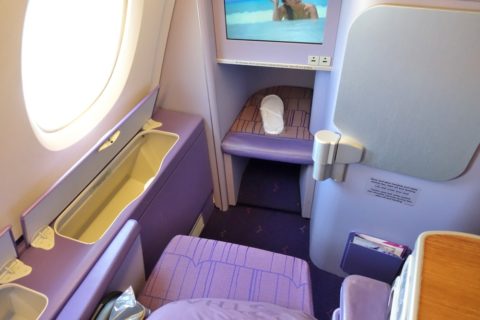 The specifications around the dashboard are not much different from those of the A 350, but the seat width is a little wider and there is a large storage box by the window, which is convenient! 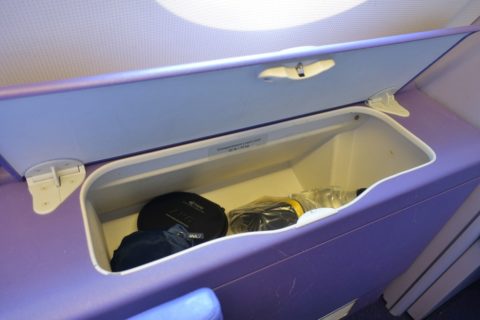 This storage box is specific to the 2nd floor seat of A 380, and it comes with not only business class but also economy class at the back.

It’s very convenient to throw anything in, but depending on the position, you might want to share it with the people around you, so it’s better not to put valuables in. 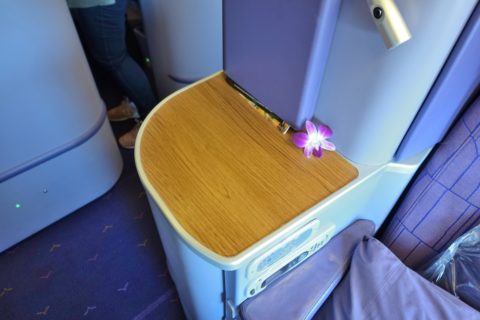 The specs are basically the same as the A350. However, I think the area of the side table is a little smaller than that. 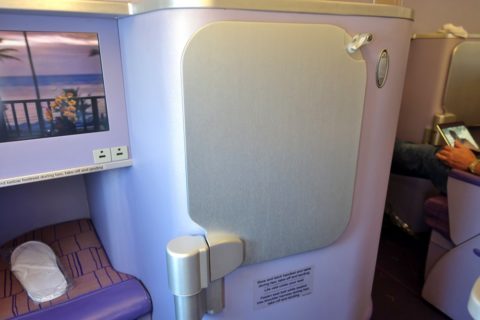 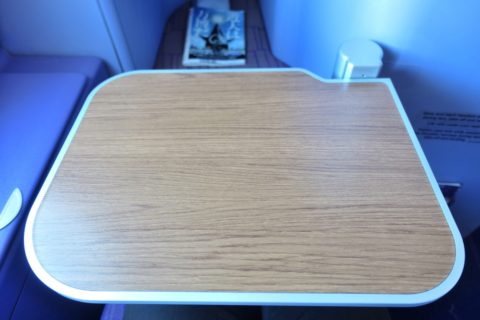 The design of the main table is different, but the usage is the same. It’s an old type, but it’s clean and clean. 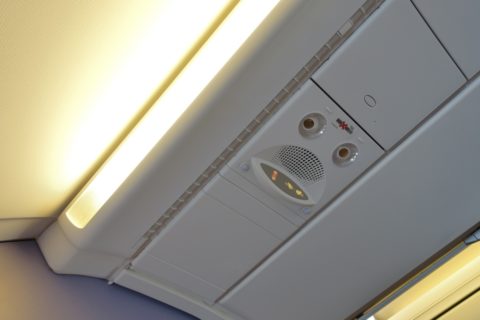 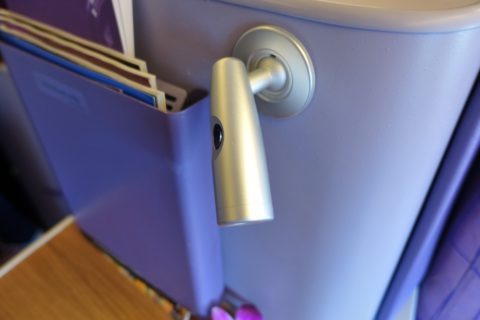 The reading light is a spotlight on the side table and an overhead light. Spotlight is adjustable in 3 levels. 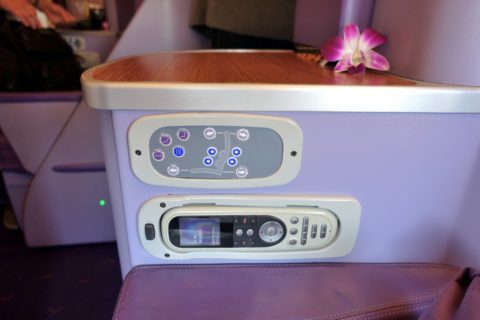 Under the side table is the seat controller and monitor controller. Maybe because it’s an old-fashioned type, I feel it’s quite old. 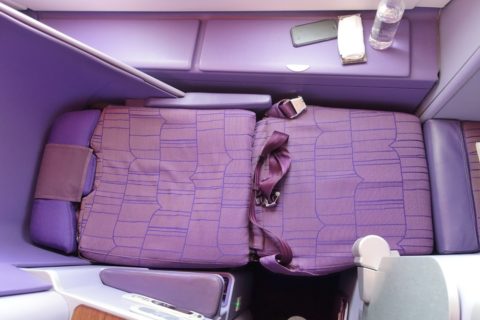 Next, when I lay down in the bed position, the space of the armrest is a little smaller than other Airways, but it has more space than A 350 because the seat width is wider.

More than that, there is a space by the window where you can put anything, so it is convenient to work while lying down! 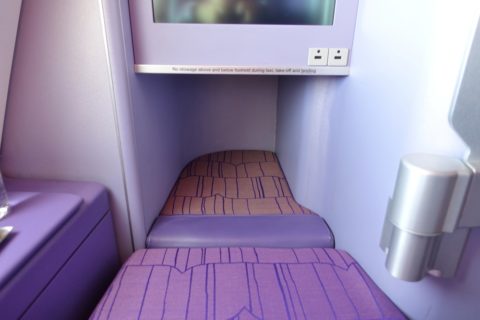 The space around the foot is almost the same as the A350. It’s not so big, but it’s tall so it’s easy to roll over. 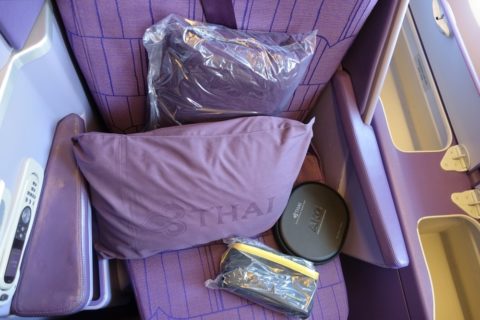 There are 2 types of bedding, pillows (cushion) and comforters. It is not a long distance line, so there is no sheet to put on the seat. 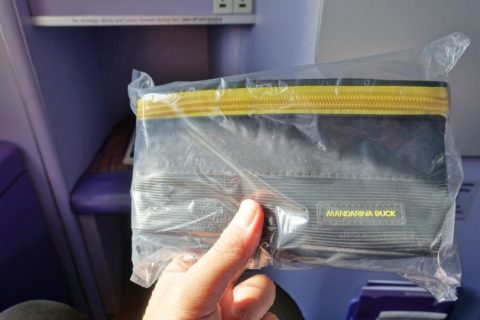 Amenity goods are exactly the same as what I got on the plane from Frankfurt the day before. It is a pouch which is not good for a long distance line, but I think it is quite satisfactory as an amenity you can get on a short distance line like this time. 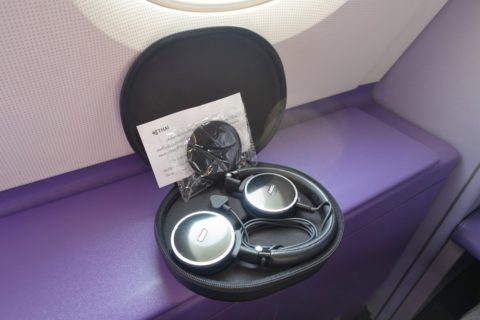 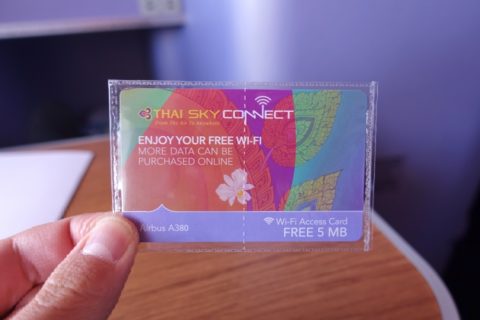 Other than that, I was given a free wifi card on the plane after a while after I left, but surprisingly, the capacity is only 5MB. …

Even 20 MB from Frankfurt was reduced to only 5 MB after surfing the net for 2 ~ 3 times, but now it’s done just by connecting. Even if it’s a short distance train, I want at least 10 MB. 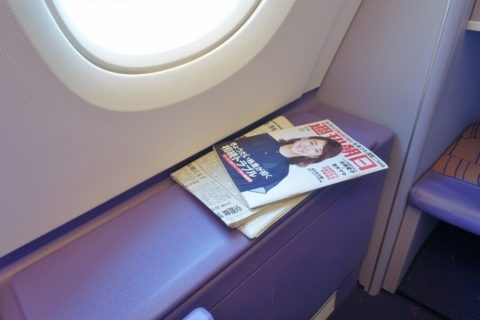 However, there are Japanese magazines and newspapers, and I was impressed by the service for a short distance train. It is a little inconvenient that the CA corresponding to Japanese doesn’t come (You’re not in business?), but … 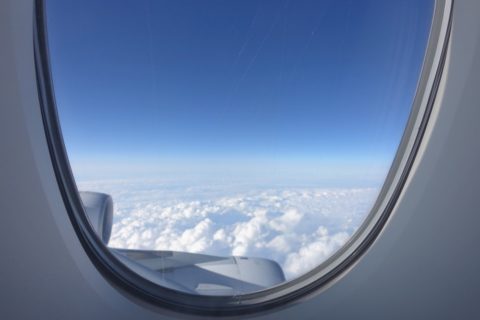 So, we will take off smoothly and go to Narita! It shakes less, and the noise is less, as expected, A 380! The super large equipment is always comfortable!