This article reports on an orchestra concert held at the Sydney Opera House in Australia. The highlight of this time is the piano concerto by Nobuyuki Tsujii! Chopin Piano Concerto No. 2 by soloist Tsujii, who won the 2009 Van Cliburn International Piano Competition, was performed.

Not to mention his ability, I would like to report in detail about his excellent performance and the atmosphere of the audience as well as the audience and foyer.

Needless to say, the Sydney Opera House is an iconic building of Sydney that is registered as a World Heritage Site. This area was always crowded with tourists.

According to the map, it is built in a place like a peninsula that protrudes. There are no trains or regular buses around here, but there seems to be a bus stop near here for the open top bus for tourists. If you go by train, get off at Circular Quay (circular key) station and walk around looking at the harbor, you will arrive in less than 10 minutes. 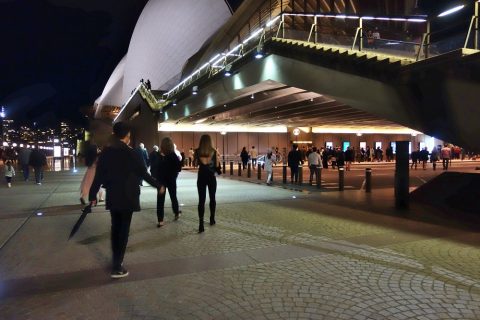 The entrance to the concert hall is on the first floor. If you go straight without going up the grand staircase in front of the opera house, you’ll get there. 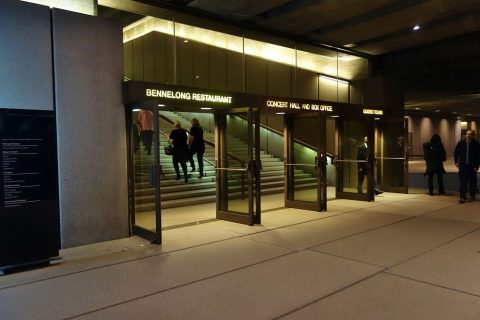 If you enter from here, you can also go to a high-class restaurant called Bennelong Restaurant. I got lost on the way home by mistake …。

leave one’s luggage at the cloakroom 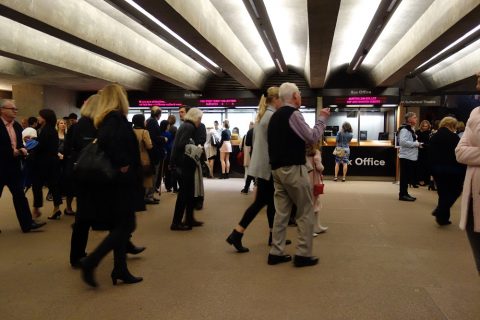 If you go up the stairs to the concert hall entrance, there is a lobby, and there is a box office that handles tickets. If you haven’t already issued your tickets at the office of the Sydney Symphony mentioned in the article on how to purchase and receive concert tickets for the Sydney Opera House, you can exchange them for real tickets here. 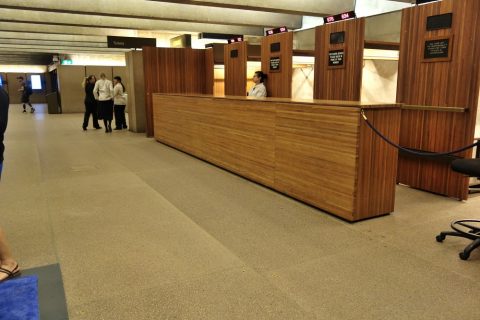 This concert hall of the Sydney Opera House is pretty strict about taking luggage into the hall and when I was about to enter with my backpack on my back I was warned to leave it in this cloakroom. Instead of a big backpack bothering me, I could carry it on my back to the audience seat as usual at the Paris Opera House, etc. …。 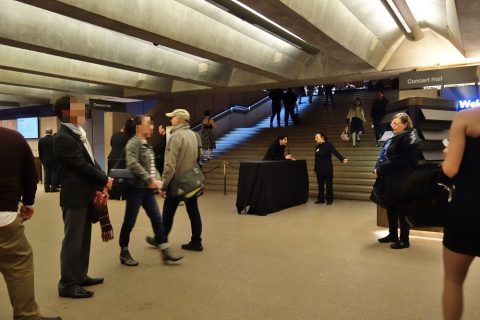 After you check your baggage, you enter through the stairs marked Concert Hall, and the ticket is checked here. 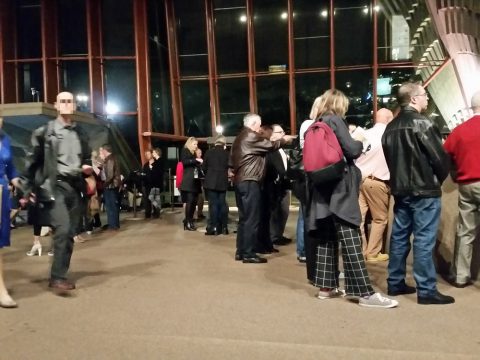 Go up the stairs and you’ll find the foyer. It was still 30 minutes before the show started, but it was already crowded. 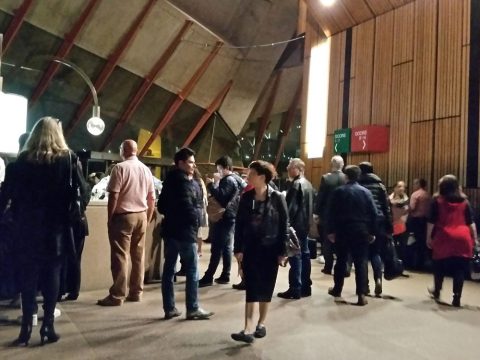 I guess 80% of the customers are Westerners and 20% are Asians (including Japanese). Since Nobuyuki Tsujii will appear in this performance, I often see Japanese people.

As for clothes, the rate of formal attire is relatively high, but it is not as high as in Vienna. However, there are no people who wear casual clothes like those seen in Singapore, so I think it is safe to wear beautiful clothes. 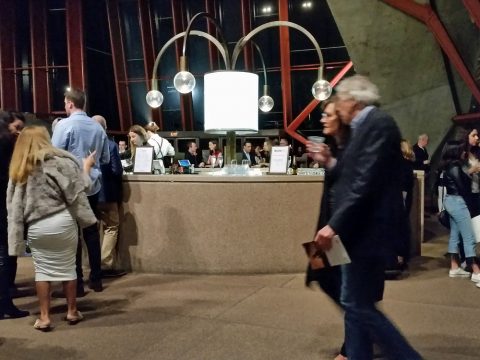 An essential bar counter for social occasions. After that, there was a long line during the break time between the songs, but it seems to be relatively empty before this performance. 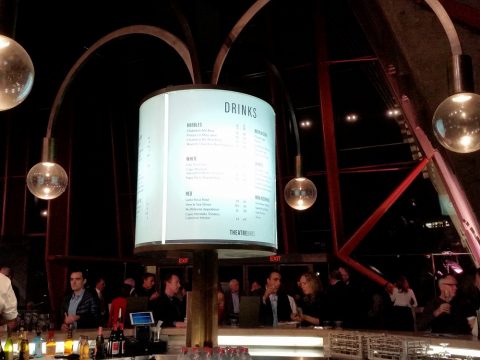 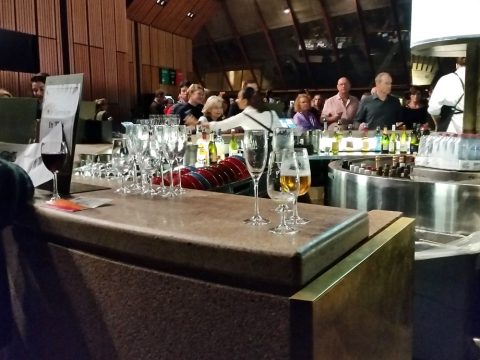 You can just leave the glasses on the counter after you finish drinking. Also, there are not many counter tables and chairs in the foyer, so you will need to drink standing unless you come very early.

An observation deck with a night view 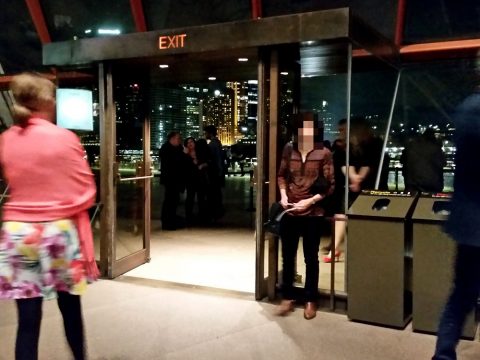 This foyer faces the port of Circular Quay, so you can see the night view from the window, but there was a place where you can go out to the observation deck directly in one corner of the foyer. 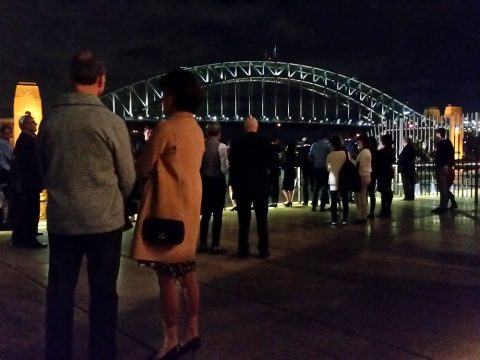 From the deck, you can enjoy a panoramic view of the high rise buildings and Harbour Bridge that stand in the back of the harbor! However, you can still see this view without going into the Opera House, so I don’t think there’s anything particularly moving about …。 because all the people around are ladies and gentlemen, so if you bring a flute glass of sparkling wine, you can enjoy the atmosphere.

a large hall with a huge pipe organ 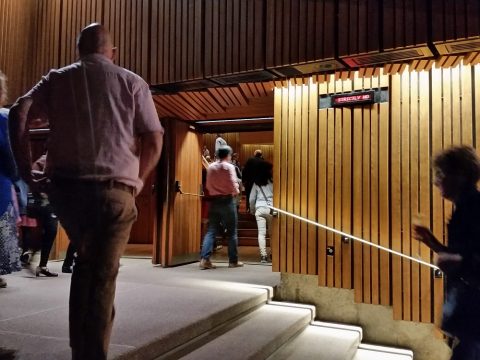 Then let’s go into the auditorium! There was also a ticket check at this auditorium, but it was only before the show started and not during the break. The ticket I arranged this time is for the first floor seat, but I would like to see the whole venue from the second floor seat first. 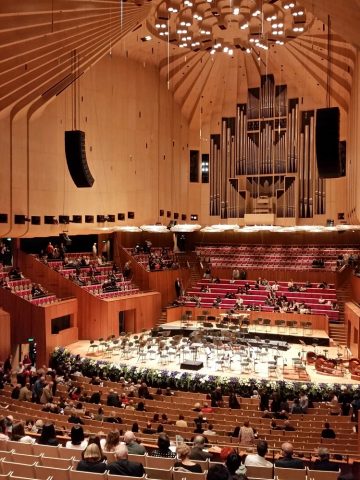 A large hall with seats on the side and back of the stage. But it doesn’t look like a huge hall, but it has 2,679 seats, which is bigger than the concert hall of the Tokyo Arts Theater or the big hall of Tokyo Bunka Kaikan. The pipe organ, which is said to be one of the largest in the world, is impressionable. 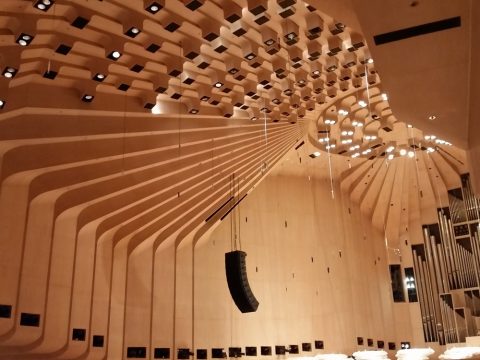 This hall was completed in 1973 years, so I don’t feel it has a long history, but the uneven design continuing from the ceiling is beautiful. 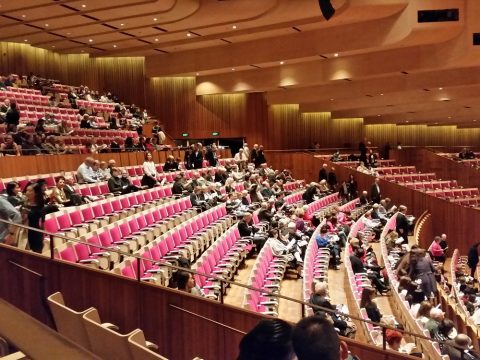 The seats on the second floor are like this. I’m a little worried about the reverberation because the ceiling gets closer as I go upstairs. I don’t know about this until I listen to it here, but …。 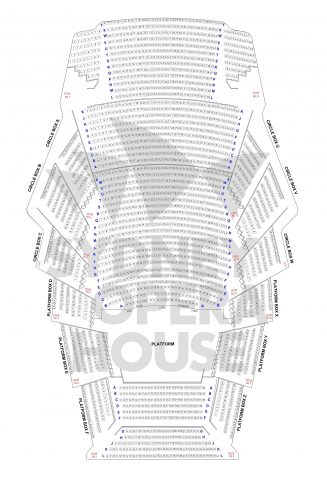 My seat this time is in the middle of the 6th row (J Column) from the front of the 1st floor seat. The category was second from the top. 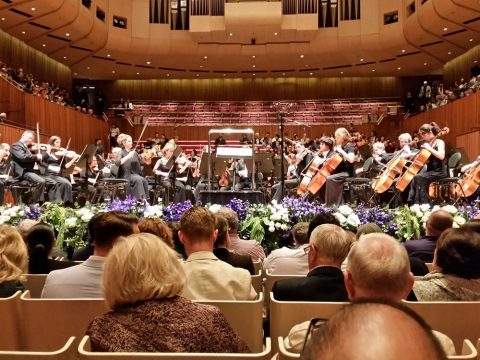 The view from here is good! The back of the seat is elevated from the J row, so you can see the stage better than the seat in front of J. However, it is not possible to see the whole orchestra, especially the wind instruments, and the soloist (Tsujii.) can be seen even at …。, so it is perfect for this viewing purpose. 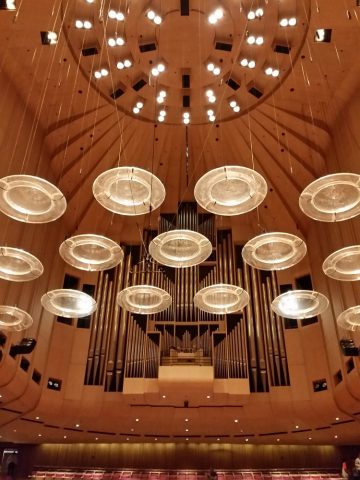 When you look up at the ceiling, you can see round transparent decorations. This is quite new. I wonder what kind of effect it has on the sound. You will also be overwhelmed by the huge pipe organ in the back. 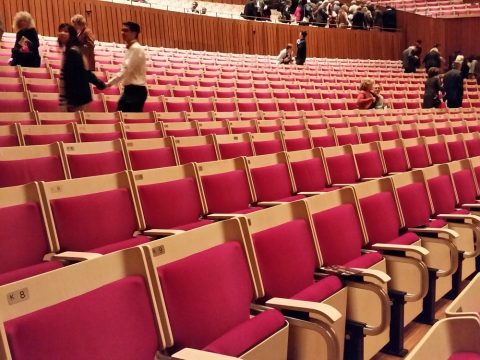 The chair has a bright wood grain and red cushion. The side is designed to surround the back. But there is no passageway in the center, so it is a little difficult to get in and out of the middle seats. 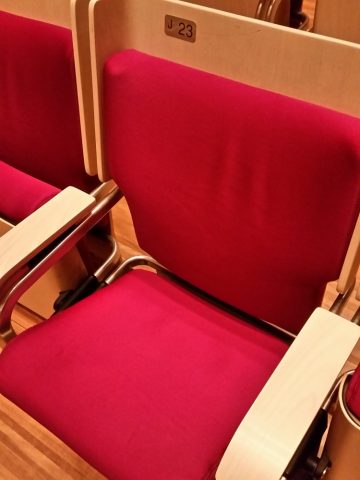 It is comfortable to sit on and the seat width is wide enough to be comfortable! 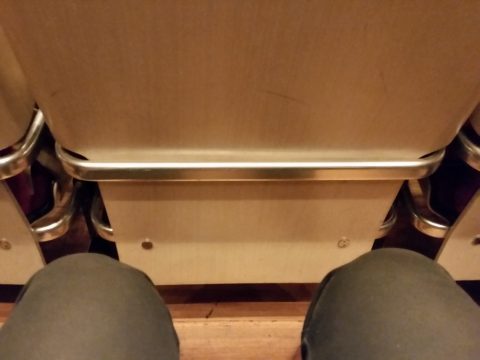 The front and back seat pitch is wide enough to allow people to pass through if you move your knees slightly sideways while sitting. 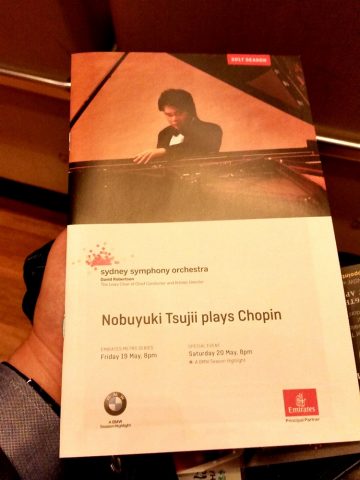 The performance program is free! It was handed out at the foyer. This program is as follows.

The attention is above all the piano concerto by Nobuyuki Tsujii! Since winning the Van Cliburn International Piano Competition in 2009, he has made a name for himself in the world. I have heard his performance on CD several times, but this is his first live performance. 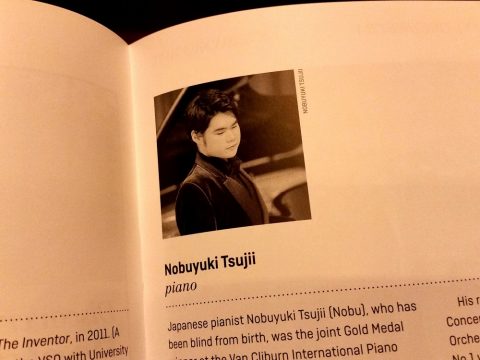 People tend to think that he is handicapped because he is blind, but his performance this time was really great! I don’t think there are any pianists who have such expert skills in both sound quality and mechanics.

After playing Chopin/Piano Concerto No. 2, she played an encore called “Revolutionary Etudes” which stirred up the audience with its perfect Virtuoso. 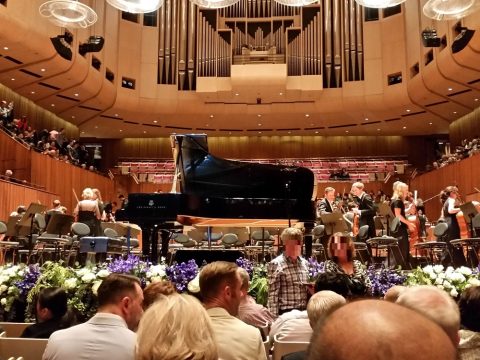 I also clapped my hands so hard that I thought I could peel the skin off! I have no memory of such an exciting concert in the past. I am so happy that there is such a young pianist in Japan.

After Tsujii’s concerto, we have a break, which lasts only 15 minutes. 15 minutes is enough for a typical concert in Japan, but this is a social gathering place for Westerners, and 15 minutes is far from enough.

There are foyer social places upstairs, but still people like this! Probably because there were not many chairs, there were some people sitting on the stairs. When I see people drinking wine and talking to each other in such a short time, I really think that Westerners like to talk.

During the 15 minute intermission, the bell rings at the same time as the “10 more minutes.” “Five more minutes.” announcement is made every 5 minutes. If I’m correct, it was something like this at the Paris Opera House “Garnier”, but wouldn’t it be a good idea to have a little more relaxing time for them? 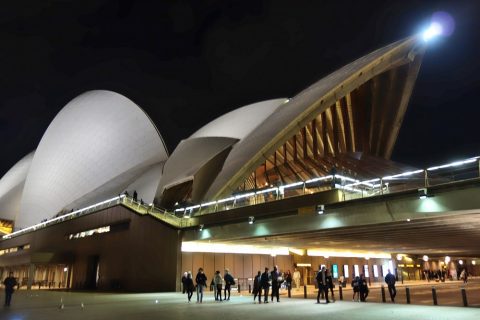 Next time, I will report on the recital of Nobuyuki Tsujii held at a different venue “City Recital Hall” from this opera house.