This time, I will report “Saint Petersburg Philharmonic Hall” which I watched the cello section of the International Tchaikovsky Competition!

This is a small hall located in a different building from the main hall, but it is said to be a very historic hall where the first performance of works by Haydn and Beethoven was held.Other than competitions, chamber music concerts are held frequently, so it’s perfect for simple concerts!

a place “small hall” that is not a large hall I went to the big hall by mistake at first, but it’s not here! I was hit like this …。

Ticket office and cloakroom in the first floor lobby Although they have the same name “philharmonic”, they seem to be completely different systems. If you go to the back, you will see cloaks on both sides, and go up the central stairs to the foyer on the second floor. I saw my ticket at the stairs. The staircase leading to the foyer is a splendid marble structure with a red carpet! There are no chandeliers or gold decorations, but this stately building is like a European concert hall. The foyer on the second floor is a high ceiling space based on white. There are no gorgeous decorations, but the interior is chic and calm. The walls are decorated with paintings, and this area is similar to Moscow Music Academy. The 3 pictures on the right side of the picture is said to be the author of “Alexander Block”, but I’m not sure …。 There are several rooms in the foyer, but this time it was the International Tchaikovsky Competition, and one of them was a studio for live satellite broadcasting. The end of the foyer is the entrance to the audience seats. They enter through doors as big as a person’s height. 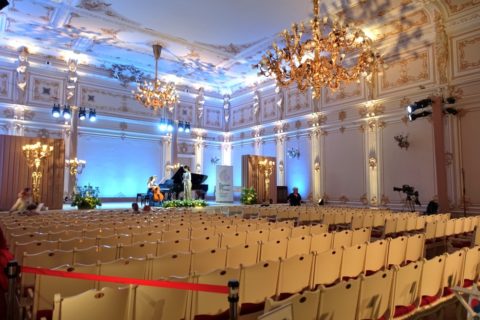 The auditorium is flat and rectangular with a capacity of about 400 seats. It’s a beautiful hall with gold decorations and sculptures all over the white walls! 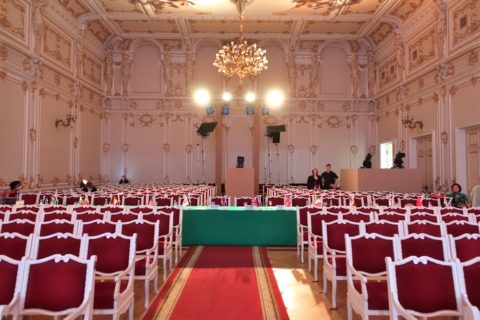 It is a simple hall with no upper floors and only flat floor seats. This is a competition, so there is a jury seat in the center. This chandelier has a characteristic tree-like design. At that time, it was lit up in blue, but according to the picture of HP, it seems that it is normally a normal incandescent light. Built in the 18 century, the hall was designed by contemporary Italian architect Bartolomeo Rastrelli. Rastrelli is the architect who designed the Winter Palace of the Hermitage Museum. In addition, famous pianists such as S. Lichtel and G. Gould, who were famous in the 20 century, and V.Ashkenazi, who is still alive, have played in this hall. The sound of this hall is highly evaluated by such a famous player. I was listening in the back seat this time, but I can hear the small sound in detail. Especially the bass part plays well, so it may be perfect for a cello performance like this time. The St. Petersburg Philharmonia Small Hall, however, according to its website, concerts are held daily, mainly chamber music. The ticket price varies from 500 RUB to 3000 RUB, but you can enjoy this venue with a cheap ticket. By the way, this time it is a performance of the International Tchaikovsky Competition Vc category, but the ticket price is only 200 RUB because of the 1st preliminary! I could listen to a world-class performance for only 340 yen!

Unlike the piano section, which is always full due to the growing popularity, it is nice to be able to get tickets on the day of the performance. This is much more valuable than listening to a regular concert. So if you want to enjoy a chamber music concert in St. Petersburg, I recommend it!