A night safari that is popular in Singapore because you can see the night ecosystem of animals. This time I would like to highlight how to access this night safari.

It is a route bus known as the most popular way to access, but there are 2 routes to go to the night safari, and this time I used the one which is not the most popular route. It’s not very popular, but it can be handy in some places. I’d like to look at the time required in detail.

There are two buses going to the night safari.

The night safari is located in the northern part of Singapore. There are also 3 other theme parks in this area, “Singapore Zoo” and “River Safari”, but since there is no railroad, it is basically accessible by taxi or bus. There are 2 main bus routes to the night safari, one is bus number 138 from Ang Mo Kio (Anne Mo Kio) station on the MRT North South line. Ang Mo Kio can be reached in just over 20 minutes directly from the City Hall, making it convenient and a standard bus access route.

From the City Hall, it takes a little over an hour to get there, but the best thing about it is that the MRT and the bus cost about $3. You can take a bus from the first station to the last station, so it’s easy to understand, so I recommend it to go leisurely.

However, Ang Mo Kio station is easy to go from the City Hall direction, but Queenstown where I stayed this time is located on the west side of the city center, so it is a bit difficult to go there and the distance is far …。

So this time, I will take another bus line, number 927, to go to the night safari. Number 927 leaves from MRT’s Choa Chu Kang (Choa Chu Kang) station, so I headed there first. 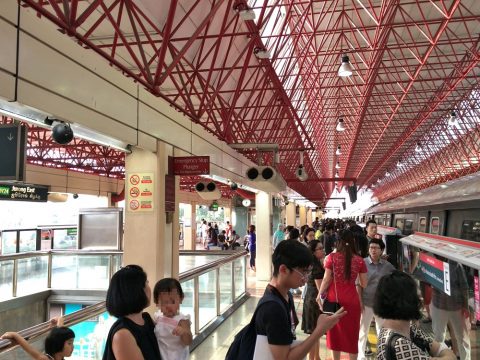 From central Tokyo, transfer to the North South Line at Jurong East Station on the East West Line. The number of stations is small, but MRT especially in this section runs very slowly, so it takes time for the distance. The train arrived at Choa Chu Kang about 30 minutes after arriving at Queenstown. I think it takes at least 45 minutes from City Hall.

Line up at the bus terminal The bus terminal is right outside the station exit. It’s a relatively large terminal with several lines running through, but it’s easy to understand because the line number is written in large letters on the platform. The number for the night safari is 927. Line up in the lane, get on the bus when it comes, and get off at the last stop. At about 18 o’clock in the evening, there were few tourists and locals, and the bus was empty. It is not a standard way to go to the night safari by using this line. 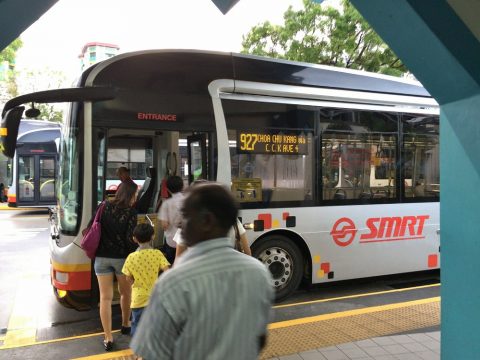 We arrived at the last stop in less than 30 minutes. The total time required to get here is 1 hour and 10 minutes from Queenstown station including the bus wait time. It takes about an hour and a half from the City Hall area, but it’s much faster from the west side of the city. I think you should choose between number 138 and 927 depending on where you are staying.

There is a shuttle bus. Access to the night safari is not limited to the two buses mentioned above. One is a shuttle bus called Singapore Attractions Express. There is also a special counter at the bus terminal for night safari. This will take you to Khatib MRT station in 15 minutes, which may be faster than taking bus 138 from Ang Mo Kio. The fare is $2.5, which is a little expensive compared to regular buses, but I think it’s worth using. But the number of buses is small, so it would be better if the timing is right. There is also a shuttle bus called Safari Gate that takes you directly to the night safari from places like Marina Bay Sands. The price is $7, which is more expensive, but it may be easier than anything. However, the number of flights is even less, so you will need to check beforehand. By the way, if you take a taxi, it costs about 30 ~ 40 dollars from the city center, but if you take a taxi on the way back from the night safari, you have to buy a ticket, and the price is rather expensive, $50 ~! When you visit as a group, I think the best choice is to go by taxi and come back by bus.

There is not much difference in the required time. 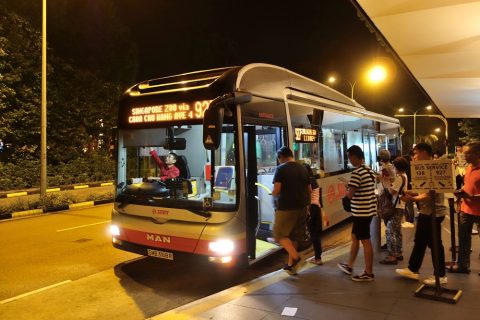 So, I have looked at several ways to access the night safari (and zoo, river safari), but it takes about 1 hour no matter which way I use. In that case, MRT + fixed route bus is the most stress-free and I think this is the safest for personal travel.