As I wrote yesterday, I visited St. Andrews Church in Singapore on Sunday. I couldn’t go inside at that time, so I visited again later to see the inside.

In contrast to the church, the church is quiet. It’s a little dim with the lights down, but even so, there are some new discoveries that can’t be seen from the outside, such as stained glass in places that were not seen during the worship.

From the back door to the side of the building.

The church is located in front of City Hall Station. It is located in the center of Singapore city, but there is a lot of nature around it and it is spacious. 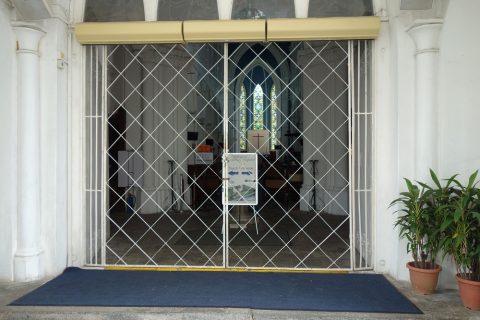 The front gate of the church was somehow locked with iron bars. I thought you were off today for a moment, but … 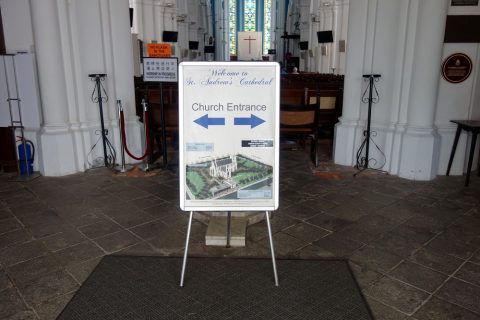 It looks like they are going in and out from the side of the building. Is there a tour route? 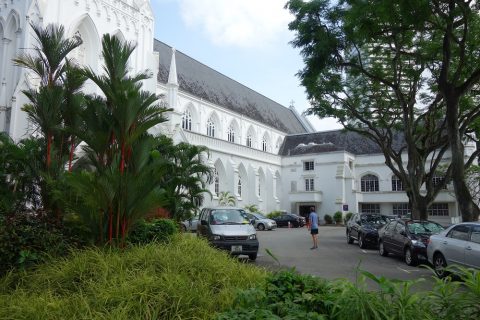 When I went around from the main entrance to the side of the building, there was a small back gate. There is no reception or ticket control, and admission is free. 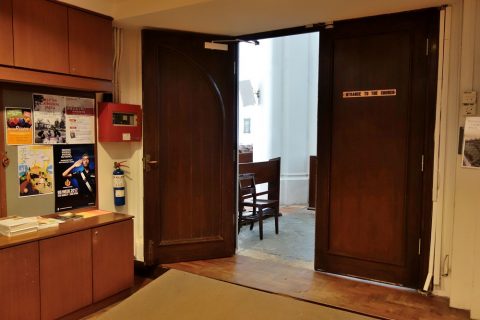 Entering from the back door, it was a small cubicle. It has an atmosphere just like the entrance of the backstage of a concert hall, and there are places where leaflets and pamphlets are piled up. 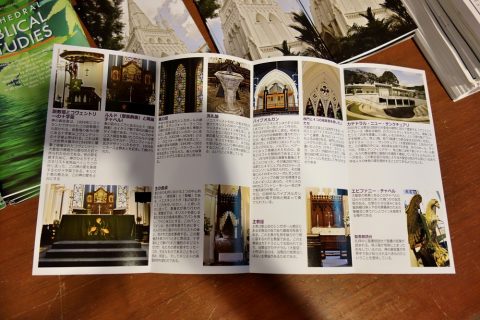 There was also a Japanese version of the brochure. Although I am not quite sure, I understand the names and roles of each department. 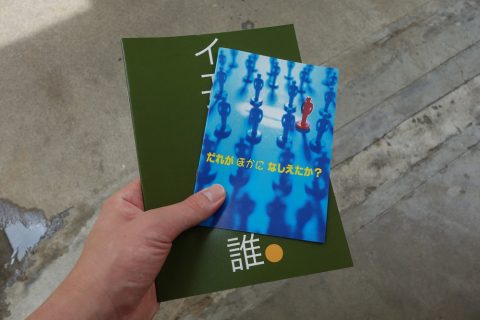 A person who appeared to be an employee of the church asked me, “Are you Japanese?” and when I answered Yes, they gave me a booklet like this. You guessed right. However, the fact that the telephone number is written here and there is no wording that makes you solicit without knowing it is a very different point from a certain religion in Japan (lol).

stained glass near the ceiling 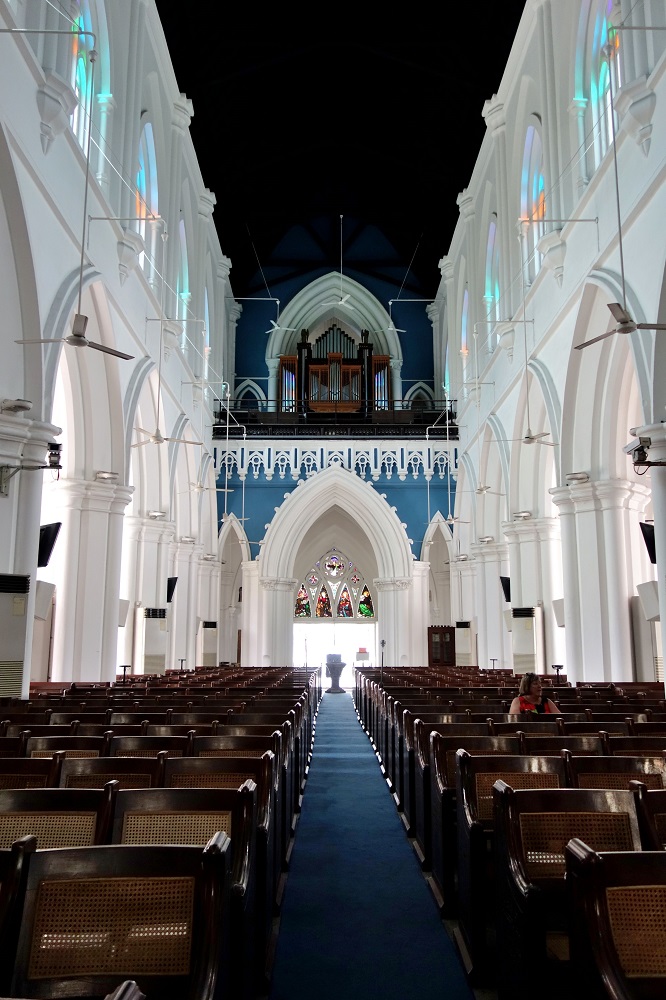 We entered the auditorium. Even though I hesitate to cough quietly, I can see about 2 ~ 3 tourists. During Sunday worship, indirect lighting was lit on the side wall and it was beautiful, but it was a little disappointing because it was turned off at that time …。 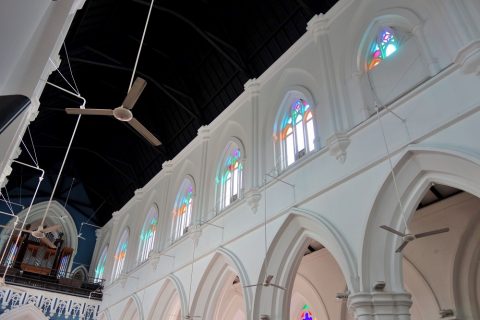 But there are stained glasses in the small window near the ceiling, so it’s pretty. This light reflected on the white wall is rainbow color. 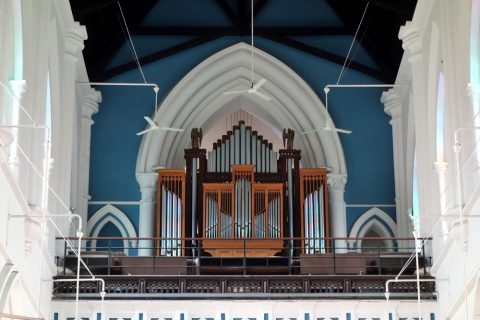 No pictures of the altar … 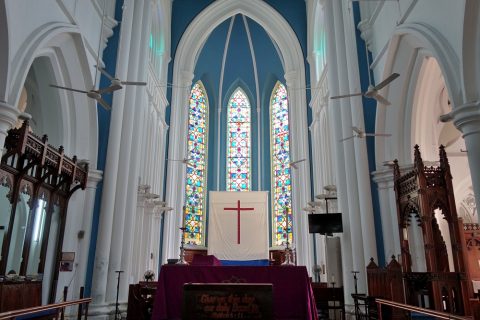 If you look at the altar in front, you will see that it does not have a big Christian painting like churches in the West, only a cross flag. According to the brochure, there should be an altar with an Italian mosaic, but it’s not even there … 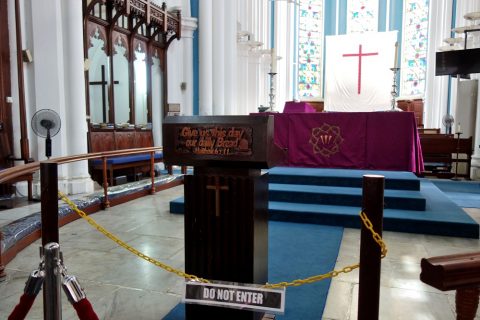 I thought I was hiding behind the flag, but I couldn’t get closer to the altar and couldn’t check it because the area around the altar is off-limits. Speaking of an altar in a church, you can see a beautiful painting that depicts the Assumption of the Virgin Mary in grand style, but it’s a bit disappointing. 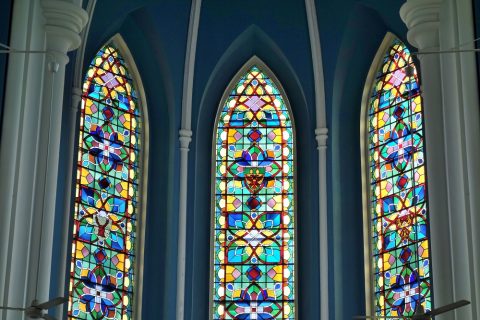 Instead, the three stained glasses in the back are pretty. Each one has a small shield pattern, but you can see that the designs are all different. It’s dedicated to Singapore’s founding company, Stamford Raffles (1781 -1826). I think this stained glass is the best thing to see in this church.

The footrest under the chair? 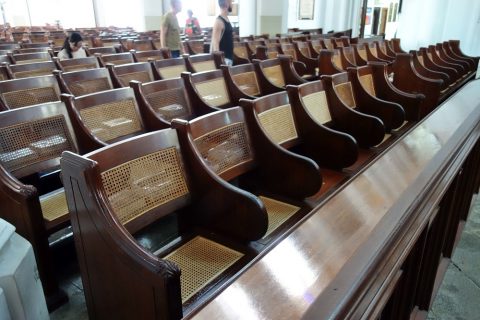 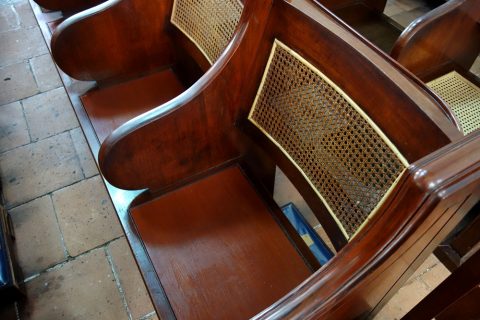 When I look at the chair, the back part is made of mesh. Like the ceiling fan on the ceiling, I think this is a characteristic of churches in the country of perpetual summer. 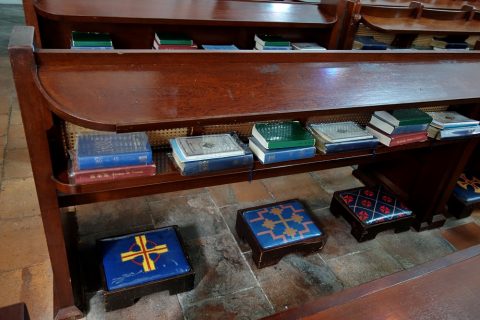 Are there many dictionaries on the seat? And colorful footrests? dialogue box opens. 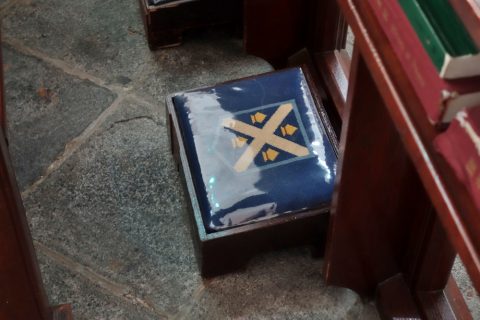 This is because believers kneel (kneel down) when they offer prayers. No wonder it has a fluffy cushion. It is not a footrest, so you should be careful when you sit on a chair. 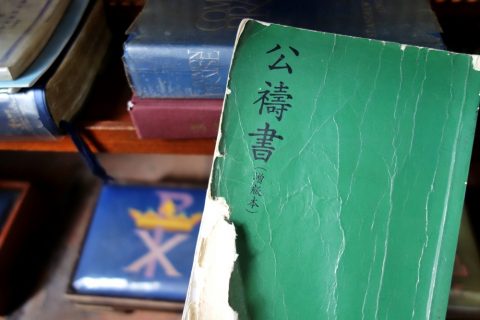 And many books say, “liturgy”. It’s called (Jitou) and it’s a guide to Christianity’s beliefs and services. When I often stay at a hotel, I find it in a desk drawer. Is it like that?

Great for a break? a quiet church 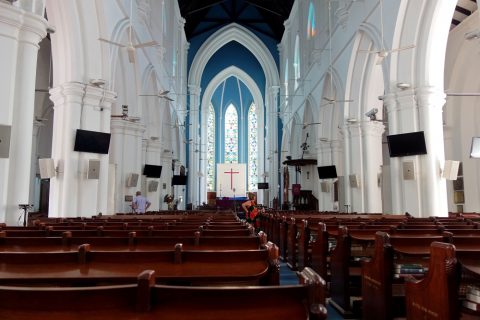 After the tour, I took a short break in this chair, but it was so quiet that I felt drowsy. …。 It is only a ceiling fan and does not have an air conditioner, but it is not hot because of the wind and it may be a good place to rest after walking through the city under the blazing sun. 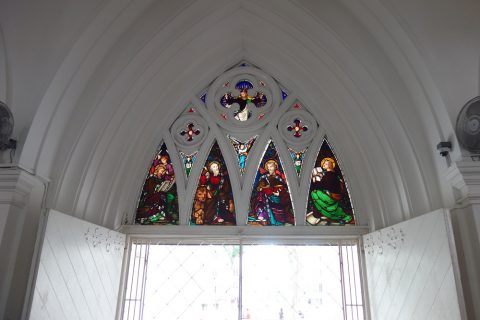 This time, I have looked inside the St. Andrews Church, and though there is no gorgeous decoration, I feel that it is the best place to rest quietly. I think it is a rare space in Japan where you can see the beauty of stained glass in the simple construction.

A night safari that is popular in Singapore because you ca...