Continuing from yesterday, it’s about buses in Singapore. This time, I would like to report the details of the double-decker trains.

When it comes to double-decker buses, London, England is famous, and when I visited there last year, I was impressed by the comfortable ride. Such a high-deck car runs even in Singapore, and the window from the second floor seat which you can hardly experience in other countries is attractive! It was perfect for sightseeing.

There are many double-decker cars. Of course, you can take a high decker bus just like a normal bus. Even though it is a two-story building, there is no special charge, so don’t worry! The way of riding is the same, you signal the driver with one arm horizontal. 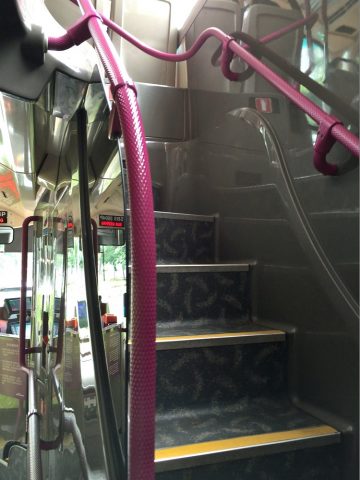 The stairs to the second floor seats are behind the driver’s seat. It is a very narrow staircase, so I will climb after checking if there is anyone coming down. It’s not specified, but looking at the local people, it seems that the passengers getting off are given priority here. Standing on the second floor of a bus in London was prohibited, but how about Singapore? But on the 2nd floor, the ceiling is low and the shaking is big, so no one is standing (Of course, …). When you get on the bus from the bus stop and move to the second floor seat, the bus will start moving relentlessly, so you should always hold on to the handrail when you look for a seat. The seats on the second floor are as you can see. The seat arrangement is 2 -2, and the back is facing. When I counted the number of seats, there were 50 seats in total, 12 rows (excluding stairways) for 2 -2 seats, and 3 -3 seats facing each other and 5 seats in the last row in the rear of the train. The number of handrails is limited probably because it is supposed to be seated. The seats have cushions like the first floor seats. The seat pitch seems a little wide. 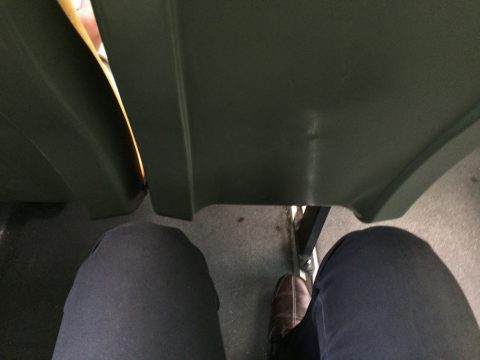 The seat width is about the same, so it won’t bother you even if you move for a long distance. The seat width is not wide, but it was never full even during the evening rush hours, so it was nothing to worry about. The width of the aisle is about the same as the first floor seats. If it’s this big, I think it’s better to increase the seat width. a facing seat in the back. This area has a sense of openness. It is a seat facing the side from the direction of travel, so it may not be very popular. The last seat is for five people. This point is the same as Japanese buses, but there is additional space at both ends, so it is a proof that the car width is wider than Japan.

I sat in the front seat! The first seat on the second floor. The popularity of London has always kept me from getting a chance to ride, and so has Singapore. However, maybe because of the number of double-decker buses, there were times when it was not crowded after several rides. 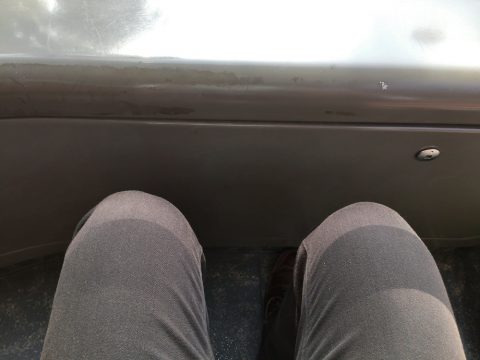 The foot space is not so different from the second row. Only the front seat of the bus in London was very narrow at the foot, so this point is excellent. However, I had an impression that the first seat in the left row was a little narrow. 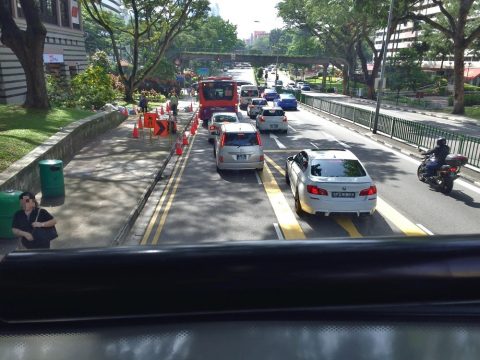 Great view! It’s better to be able to see far as it has a higher viewpoint than the first floor seats. This way you won’t miss the bus stop. 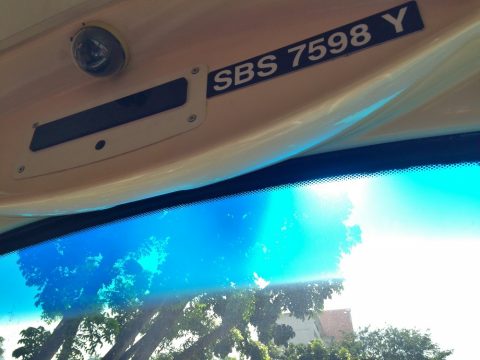 However, depending on the angle of the sun, it is hot because the sun shines overhead. It has a structure like a sun visor, but the sunlight in the country of perpetual summer is quite strong, so I can’t expect much effect. Even on …。, in a car with too much air conditioning and it’s chilly, this may be warmer and better?

Singapore’s double-decker bus offers a relaxing view of the city from a high place, and despite the bustle of the first floor, there is a quiet and relaxing space, which I felt was the best way to get around depending on how to use it.

I have an image that buses are slower than trains, but the speed of regular buses in Singapore is fast, and there was no big difference in the required time even if I used the same section as MRT, so the usage value is very high. 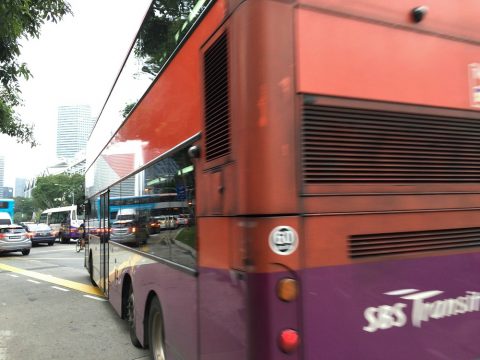 Actually, if there were such a comfortable bus even in Japan, I would use it actively. As you can see, there are various regulations in Japan, so it is difficult to introduce a double-decker bus on a route bus, and it is almost impossible to operate the government, so it is impossible to realize it, but …。