Continuing from yesterday, this is the viewing report of “SIAM NIRAMIT” in Bangkok, Thailand. This time, I would like to report mainly about the access to the venue, the contents of the performance, and special attractions in the park.

The nearest station to Siam Niramit Theatre, the SIAM NIRAMIT venue, is the MRT Thai Cultural Center Station (Thailand Cultural Centre), which is about a 15 minute walk away. It is not far, but it is a troublesome way to go up the pedestrian overpass and cross the main road, or go across the huge parking lot of the venue. 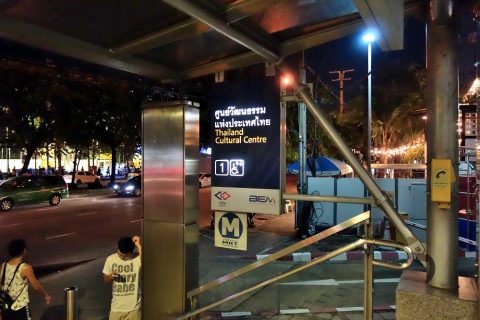 So, I will use a free shuttle bus. According to the website, the shuttle bus stop is just outside Exit 1 of Bunka Center Station. 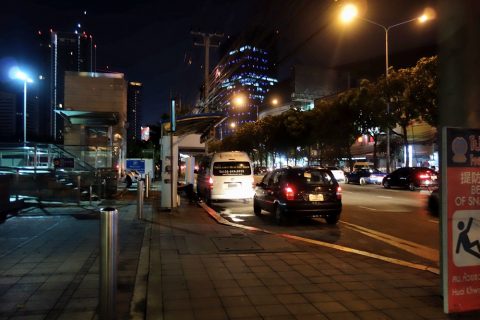 When you get out on the road and turn left, you’ll see a small bus stop that seems to be the stop. At this moment I found a silver van, marked SIAM NIRAMIT, parked there.

They didn’t ask me to show my ticket exchange certificate, and when I showed them how to get on the van, they showed me to the inside of the car. 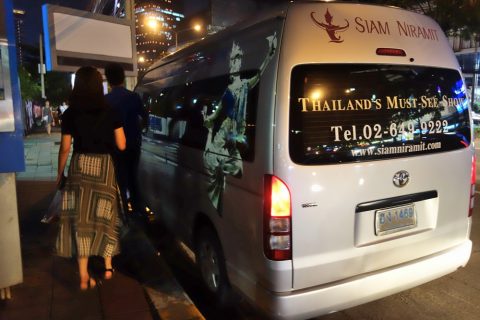 The show starts at 20 o’clock, but shuttle buses reportedly run every 15 minutes from 17: 15 (Until 19: 45). However, at this time, it seems that several people were already waiting before I arrived, and it started right after I got on, so it might not start until a certain number of people gathered.

Exchange at the ticket booth 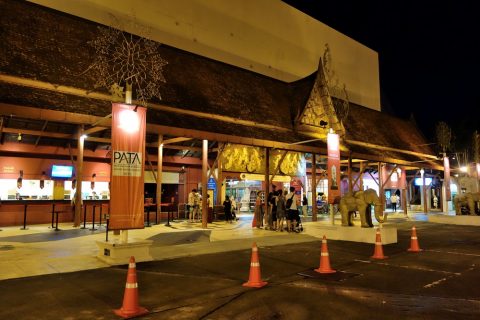 It takes about 10 minutes by bus (It takes time because of the traffic jam …) to get off in front of the SIAM NIRAMIT entrance. There is a ticket booth here, and you can exchange the receipt printed out at the time of reservation for a ticket (Reference: Get good seats in “SIAM NIRAMIT”! Ticket Purchase and Seat Map). 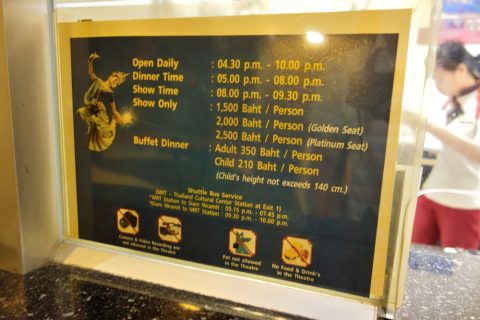 The opening hours of the ticket booth are as shown. The fixed price of the ticket is also written, so they seem to be handling today’s tickets here. It also says “Buffet Dinner: Adult 350 Baht” so it might be possible to order dinner separately here. 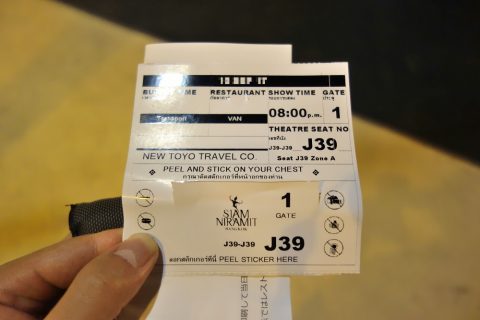 The ticket is as simple as this. There is a sticker on the bottom, and you are told to peel it off and stick it on your clothes. 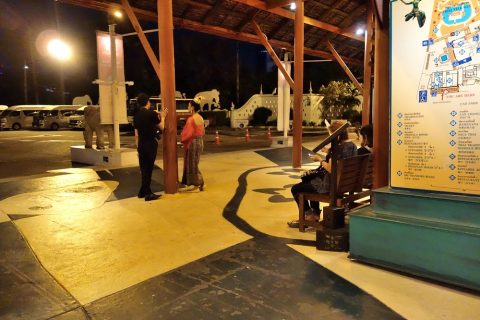 By the way, when I received the ticket, a woman wearing a traditional costume came to me, and I was taken a picture of myself! I thought it was some kind of fraud, and I was surprised, but it is a pattern of an album being sold later. As was the case with the night safari in Singapore, I am very upset because the shutter is suddenly taken without any notice … 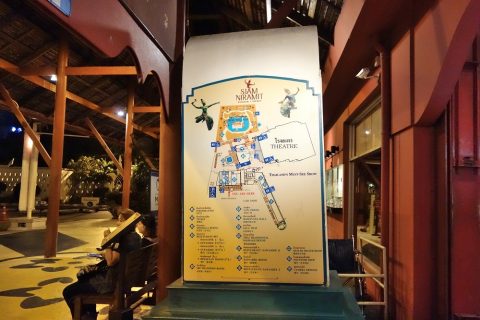 If you look at the entire SIAM NIRAMIT building, you will see a plaza through the building with the entrance, and beyond that there is an area called “THAI VILLAGE”. This area is different from the main venue, but we still have some time before the show starts, so let’s go and see! 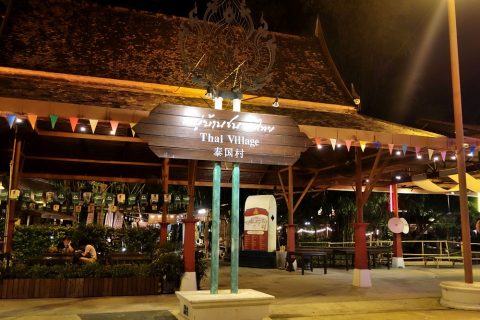 After you pass the entrance after the ticket check, there is the entrance on the opposite side of the square. According to the brochure, the rural area of Thailand has been reproduced as it is, and you can experience it for yourself. 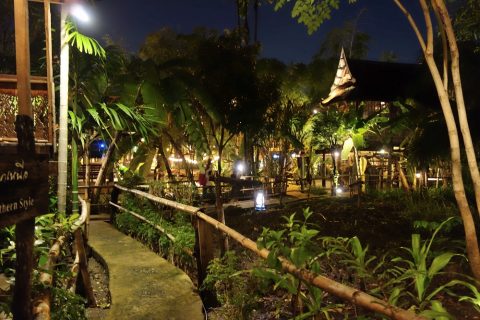 When you enter, you will find several tasteful, old-fashioned buildings in a jungle atmosphere. There are high-floored buildings and lakes, so it’s quite authentic. It was dark at night and I couldn’t see the whole view, but the illumination felt good! 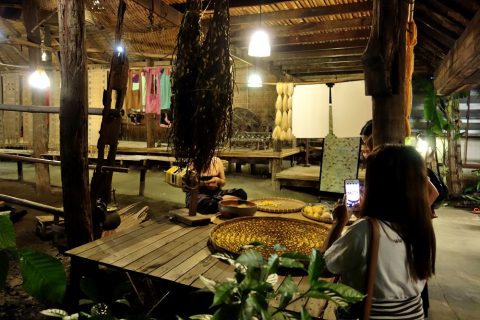 Traditional crafts were exhibited in each building, and some of them were actually made like this. 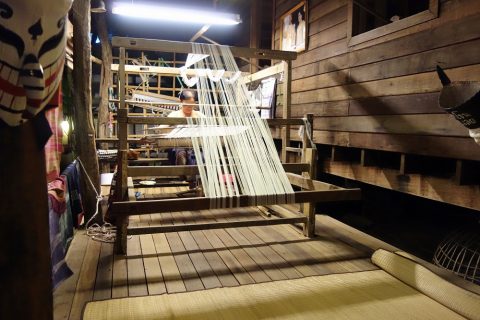 The authentic weaving machine is also available! You don’t usually have a chance to see the actual moving parts like this. 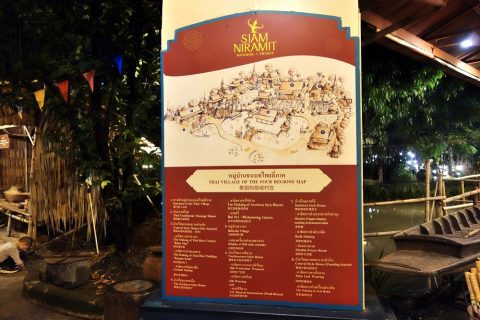 It takes about 10 minutes to walk around this area. I heard that there are places where you can ride a boat and serve traditional sweets, but I didn’t see such a place because it was already close to the opening time. If you come earlier, I think you can enjoy it.

Leave your camera and enter. 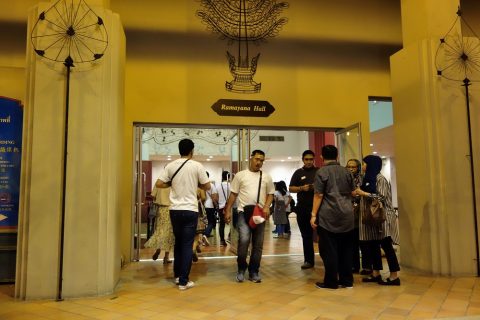 Well, the show will start at 20 o’clock, so we will go inside. The performance will be held in the hall called Ramayana Hall, but photography is prohibited in the building. When you enter the entrance, there will be a security check, and if you have a camera, you will be asked to leave it at the cloakroom. At first, I was going to put it away in the back of my bag, but it was checked very carefully and found … 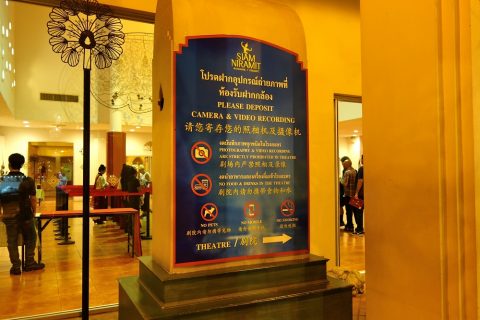 Some people may be a little reluctant to leave their precious camera, but they will put it in a cushioned case when you leave it. But when I think about it, my camera went bad after this …

The world’s best stage is worth seeing! 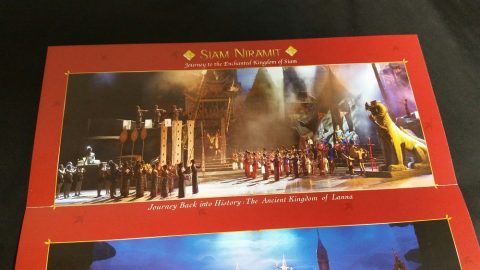 First of all, the scale of the stage is amazing! The venue was a general large hall with a capacity of 2000, and I was surprised that the height and the depth of the stage were especially spacious! The height of the stage is recognized by Guinness as the highest in the world (That’s what the brochure says.). 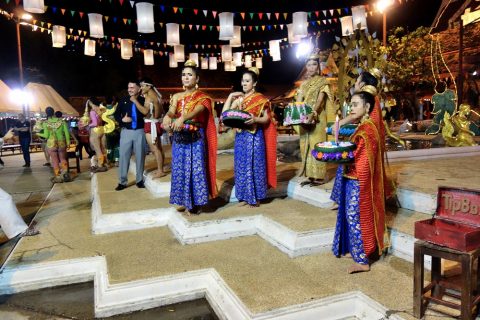 The performance takes full advantage of this wide stage, with a total of 100 performers dancing and acting in various ethnic costumes from ancient to modern times. Some of them actually make a river by flowing water on the stage, and there is also a performance like diving there! 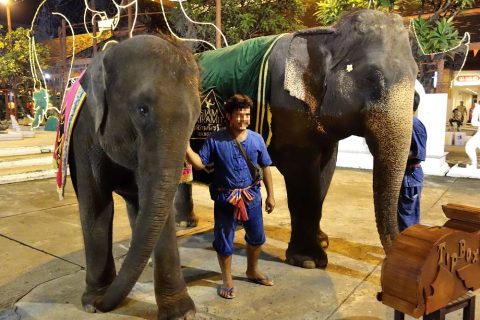 There are also some real animals such as birds and elephants. The elephant came out after the performance, so I took a picture.

There’s no harm in going to an entertainment show. 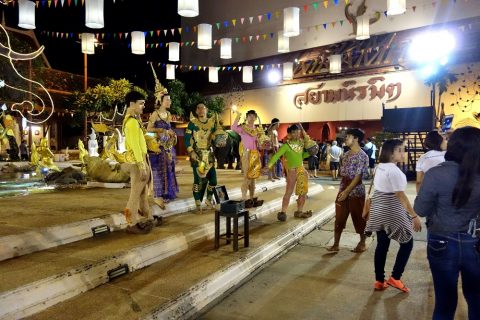 The SIAM NIRAMIT is quite impressive. The ticket price is not cheap considering the cost of living in Thailand, but on the other hand, there are few places where you can see such a dynamic entertainment show for about 3000 yen.

The explanations that appear in various parts of the show are translated into multiple languages and displayed in Japanese, so you don’t have to understand Thai or English to understand them, and I think they are especially suitable for first-time visitors to Thailand. I wrote about the tickets and seat maps in yesterday’s article → Get good seats with “SIAM NIRAMIT”! Ticket Purchase and Seat Map