Right next to the Teatro Nacional de Sao Carios in Lisbon that I told you about the other day, there was another theater called São Luiz Teatro Municipal, and when I went there, it was a beautiful theater with small but gold decorations!

There was no particular program I wanted to watch, but I bought a ticket for preview this time. I would like to report in detail on the method and inside situation.

Sao Luiz Teatro Municipal is here. It’s on the opposite side of the road from the National Theater of San Carlos I told you about the other day. 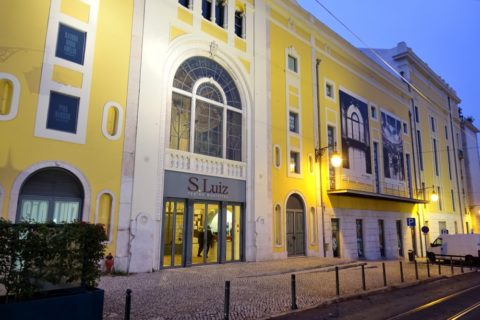 The entrance is on the west side of the building. It was renovated in 1998 and originally opened in 1894. But it’s 100 years older than Teatro Nacional de Sao Carios, which was built in the 18 century. 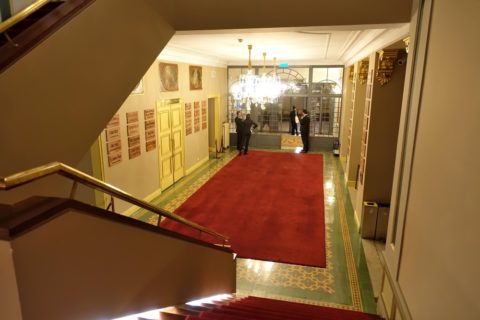 When you enter the ticket office, there is an entrance hall with a chandelier and red carpet in the back, where you can check your ticket. When I entered from this side door, it led to the audience seats in Hiradoma, but it was before the opening time, so I was told to wait in the lobby on the upper floor. 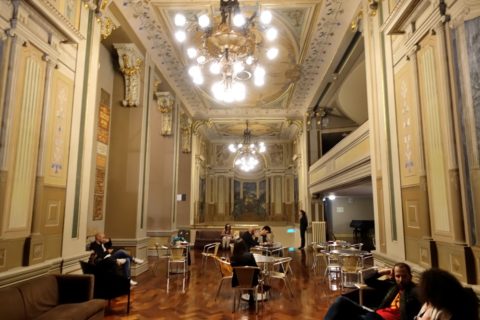 Take the stairs to the second floor and you’ll find a foyer with high ceilings and a slightly luxurious interior! The ceiling is decorated with a chandelier like a tulip flower, ceiling paintings, and golden pits. 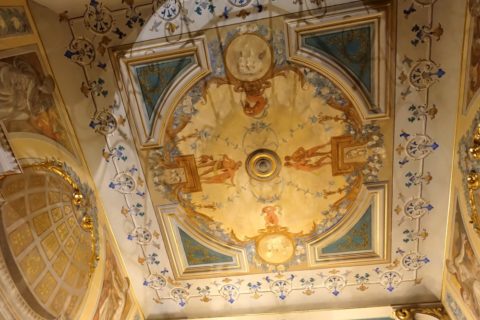 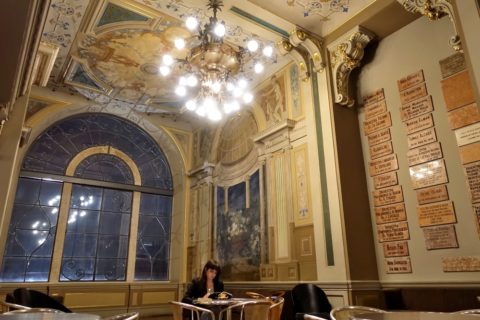 The ceiling painting is not a religious work, but a design with blue flowers like azuleo. If you look closely, a landscape painting like a Greek temple on the wall looks like a trick picture because part of it is drawn along the ruggedness of the wall. 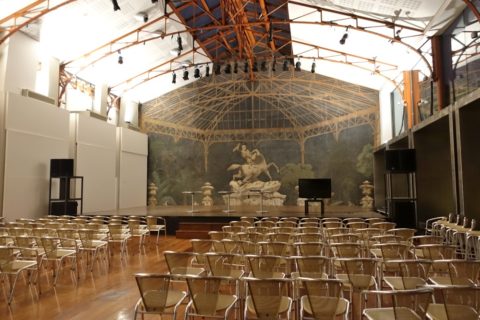 However, there is a slightly inorganic multipurpose hall next to this beautiful foyer, and it is undeniable that the view is somewhat spoiled. 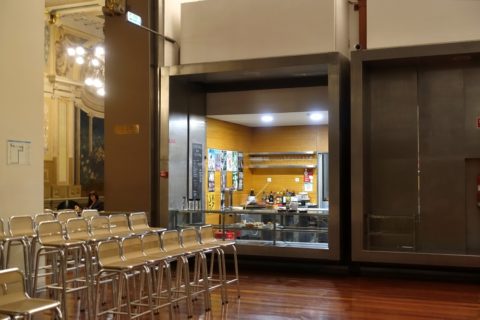 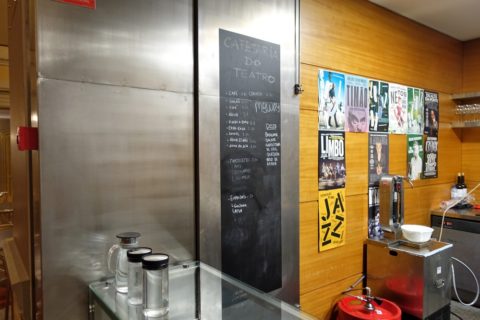 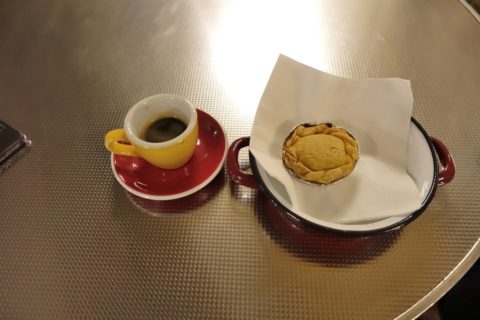 The bar only has coffee and bread on the menu, but espresso is priced at a reasonable €0.85 price! There is also a Portuguese pastry for €2 “Empada” which is just right for my stomach.

What a gorgeous golden hall! 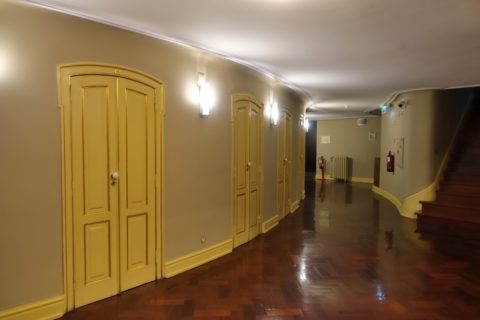 By the way, 15 minutes before the curtain time, entrance to the audience started. This foyer on the second floor also has an entrance for the audience, but this is the entrance to the balcony on the upper floor, and I enter from the first floor as I have a flat floor seat. 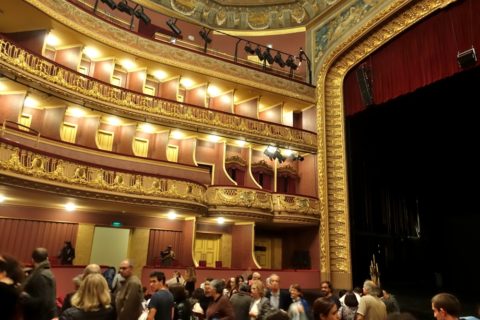 The auditorium inside the auditorium is relatively small, but it is an authentic horseshoe opera theater with three balconies. The edges around the stage and the balustrades on the balcony are decorated with gold, and the interior is quite luxurious! 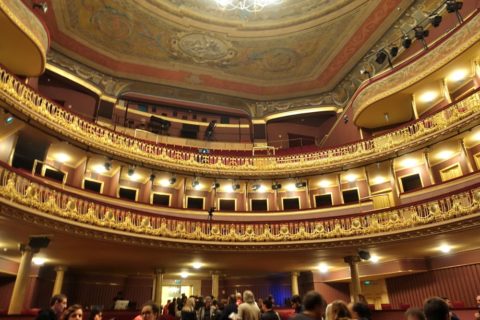 The 1st balcony is a box type with each seat divided finely, and the upper balcony is an open type. However, probably because the scale of the performance was small, no balcony was open on this day. 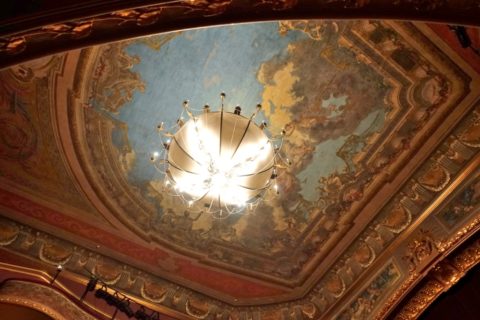 The ceiling is designed to look like a spider web. The ceiling painting is a little bit religious, but it’s calming because it’s not a heavy Christian painting (laughs). 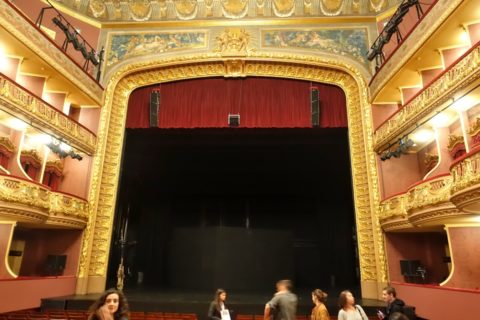 The front of the stage is a gorgeous golden pool and a red curtain. I think it is compatible with the orchestra pit, but it was blocked by the overhang stage.

The program is mainly a drama.

In addition, this performance is a play called “O DIA DO JUÍZO”. I came here for a preview, so I wasn’t interested in the program itself, but I decided to watch it just in case. However, it was a play with no music at all, and moreover it was in Portuguese, so I didn’t know what was going on, so I became sleepy …。 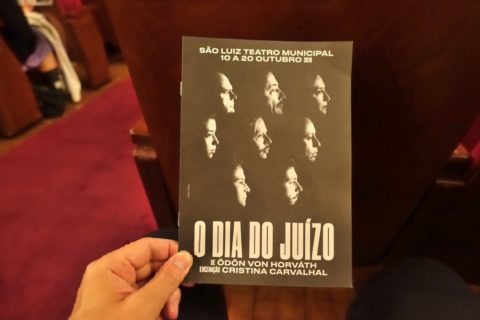 You can get the program for free, but it’s also written only in Portuguese, so it’s refreshing! From what I can see, there are no foreigners except me, and compared to Teatro Nacional de Sao Carios, this is a theater where only locals come.

The performance ended in an hour and a half without any breaks, and on the contrary, I was glad that it ended earlier (lol).

By the way, I bought this ticket from the official website. It also supports switching to English, so you can choose any performance from the “PROGRAMME” menu. You can also make a detailed seat reservation.

You don’t have to create an account to buy it, just enter your name and email address. Once the payment is completed, an e-ticket will be issued. 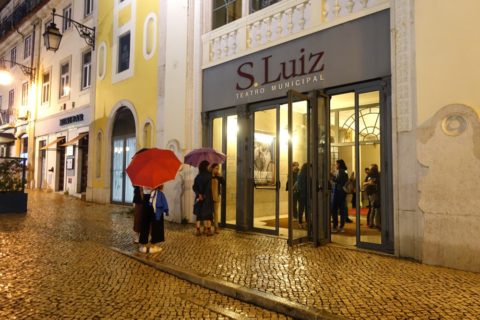 This is a report from Sao Luiz Teatro Municipal in Lisbon!

One of the venues inside Munich's Royal Palace "Residences...