This time, I would like to report on the way I see the stage and hear the sound from the opera and ballet performance at “National Theatre” in Prague.

Prague has many opera houses and ballet theaters and is a sacred place for art appreciation. In addition to the National Theater, “The State Opera”, “The Estates Theatre” and “The Karlín Music Theatre” are all lavishly constructed opera houses with horseshoe-shaped auditorium. Prices are low in the Czech Republic, a fraction of the price of tickets in Vienna or Paris! It was also attractive that I could get a first class seat with a small budget.

Ballet and opera tickets for Prague can be purchased from the National Theatre website. You can also switch to English, and once you’ve paid, you’ll get an e-ticket with a bar code, which you can print out and bring on the day. What is surprising is the cheap ticket price! For example, for a ballet performance at the National Theater, the most expensive ticket for the most expensive performance is 1,100 czk (≠ 5,000). That’s about a 20% increase even for expensive opera performances, which is only a fraction of the 20000 ~ 30000 dollars spent in Stuttsooper in Vienna and Garnier in Paris!

We’ll discuss the quality of the theater later, but it’s very valuable to be able to enjoy a real ballet or opera at such a reasonable price in a gorgeous opera house.

I first visited the opera house “National Theatre” in Prague. The site is in the west part of Old Town, along the Bull Taba River. At that time, there was an external wall construction and some scaffolding was built. It is a magnificent building with a profound feeling. Some parts of the building remain as it was built and rebuilt in the 19 century. 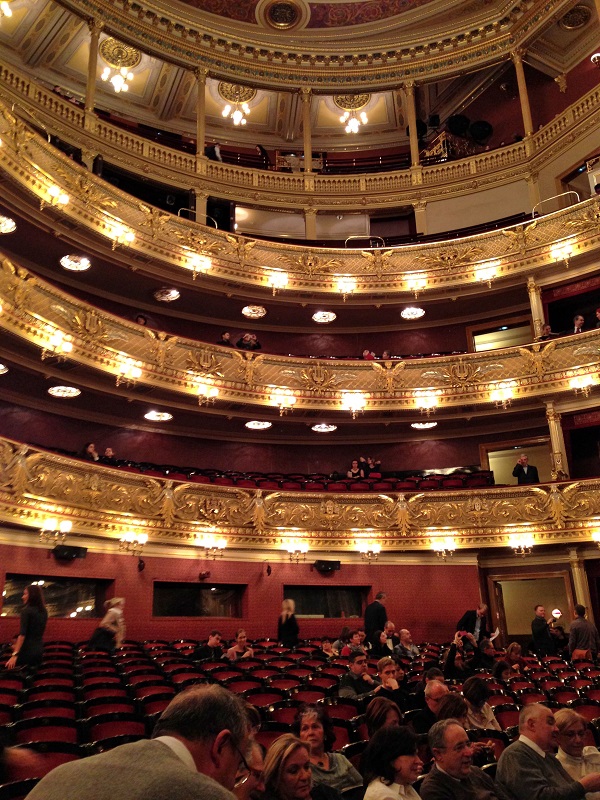 The seats are horseshoe shaped like those of ordinary European opera houses, and the red seats and gold decorations are beautiful. There are 5 levels of seats including the floor, but I feel the capacity of the auditorium itself is very small maybe because the width of the stage is narrow. The decoration of the ceiling is also quite good. However, compared to Paris and Vienna, the texture feels a little cheap.

Hiradoma with a nice view, but the sound is … This time, I saw it twice in this National Theater, first in the first row of Hiradoma and the second in the balcony on the upper floor of the stage side. The first row of the Hiradoma is literally the first row. However, it was not difficult to see the stage because the depth of the orchestra pit increased the distance from the stage. In addition, people don’t come to the front, so even small people can feel safe.

But even though the orchestra is close, the sound doesn’t come at all. Strings in particular are hard to hear, and wind instruments at …。 seem to lose the overall balance, although they can be heard well depending on the direction of the bell, especially since the distance to the gold tube is close.

The view is bad but the sound is good? balcony seat Next is balcony seats on the upper and fourth floors. The price is very reasonable, like 350 czk (≠ 1,500). This is the first row in the balcony, but if you sit normally you will be forced to lean forward because you can’t see the stage at all and this is pretty tiring …。 and there are no partitions (screen) so you may fall from time to time.

However, the sound of oche flies far more than you can hear in the front row of Hiradoma. This is a sign that the sound of the orchestra pit has slipped out to the ceiling. The auditorium has a long history, so it may not be specialized in sound quality.