Vietnam was once a country ruled by France, and Hanoi Cathedral (Nhà Thờ Lớn) is a symbolic structure of that time. I visited this church, which is also called “St. Joseph’s Cathedral”, and I was surprised by its magnificent and beautiful scenery that I can’t believe it is a church in Southeast Asia!

Compared to churches in Europe, the Hanoi Grand Church is by no means inferior, but is open every day for free admission and is a highly recommended spot!

The location of the Hanoi Grand Church is on the west side of Hoan Kiem Lake, about two blocks away. It’s the center of sightseeing, so it’s easy to access from anywhere. 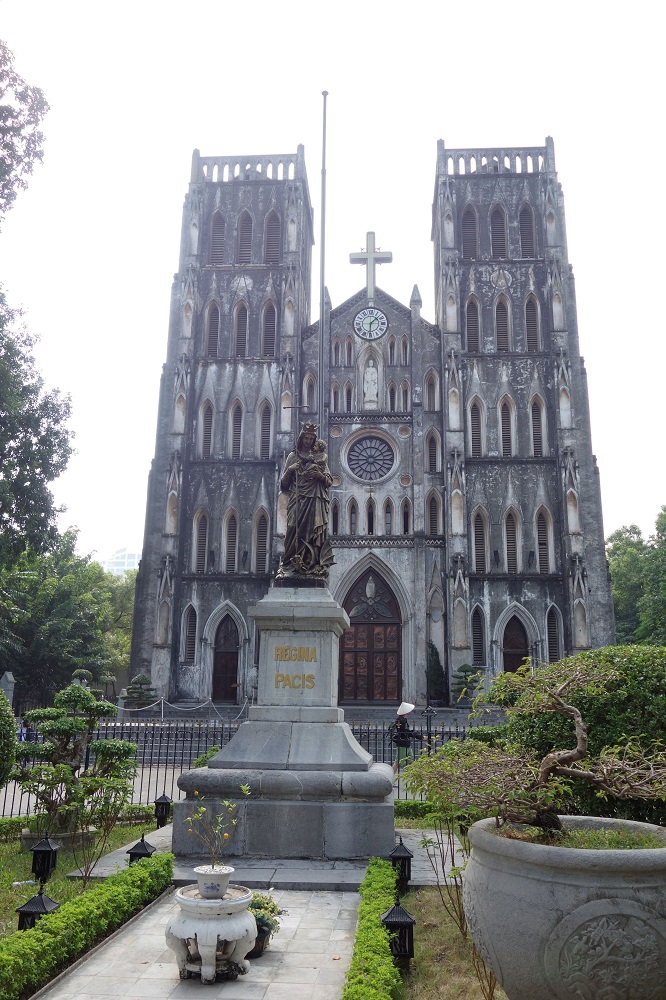 Hanoi Great Church with two towers. The height of the tower is 31.5 m, and white stones are used for the outer walls, but it seems to have darkened considerably due to poor maintenance.

Standing in front of the church is a statue of the Virgin Mary holding Jesus. 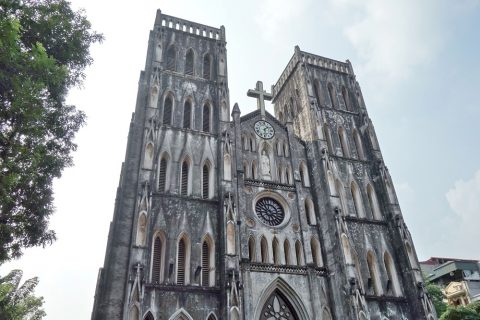 According to documents, construction of the church began immediately after the beginning of French rule in 1882 and was completed in 1886. Later, in 1990, it was remodeled into the present neo-Gothic style.

Originally, there was a Buddhist temple in this area, and this church was built on the site of the temple. In that respect, you can feel the pressure of French rule.

The entrance is on the left side facing the front. 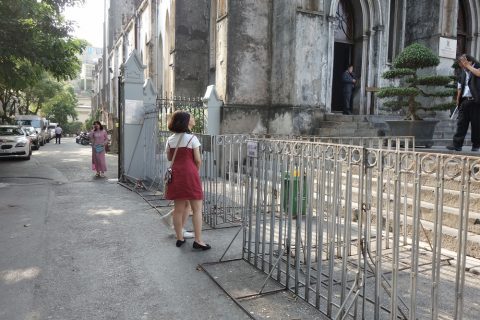 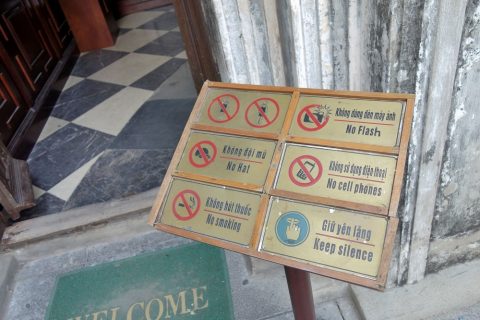 Here are some tips for churches:. Please refrain from smoking, take off your hat, and wear sleeveless clothes. If you don’t have a flash, you can take pictures. 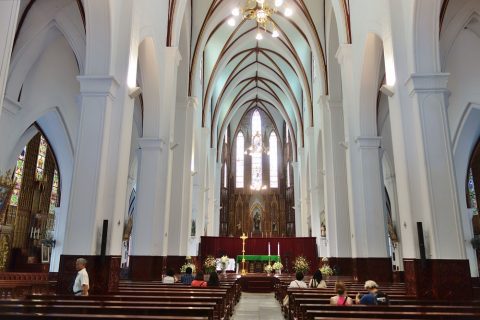 The interior has a magnificent view! It’s a bigger church than it looks from the outside. It’s a white and beautiful wall surface that I can’t imagine from its appearance covered with soot.

With a width of 20.5 m and a depth of 64.5 m, this cathedral is not very large compared to Western cathedrals, but it is fully built with side corridors on both sides. 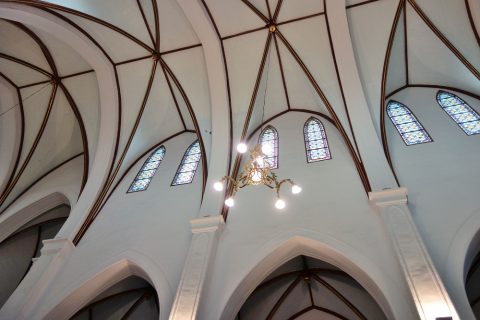 The arch of the ceiling is also authentic! There are no ceiling fans or fans in churches in Southeast Asia, so it’s easy to forget that this is a country of perpetual summer. It’s rare for a church to have a free entrance, so the lights are on properly (laughs). 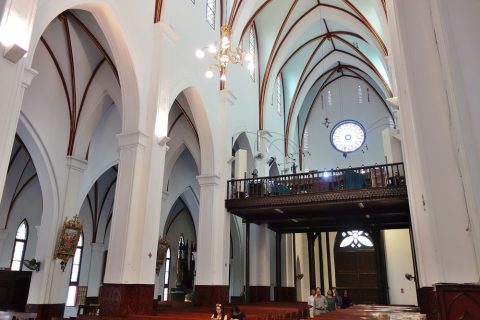 The only thing I regret is the organ. In Vienna, Austria, I have seen a number of giant pipe organs with the style of a phoenix spreading its wings, but this church does not have such a luxurious organ. …。 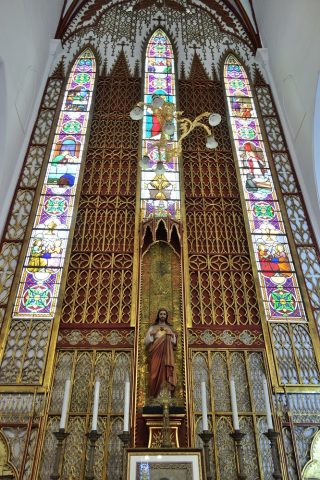 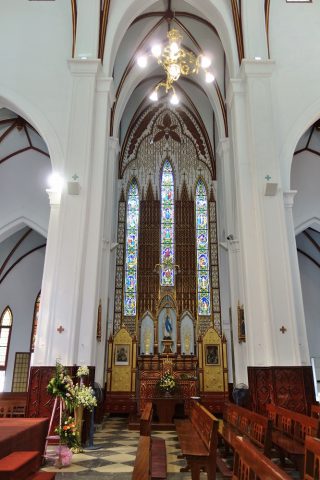 Before we look at the central altar, we start with the two altars on either side of the corridor. Here is an altar with “image of the Holy Mind of Christ” and “Virgin Mary” in the center respectively, and the colorful stained glass is beautiful! 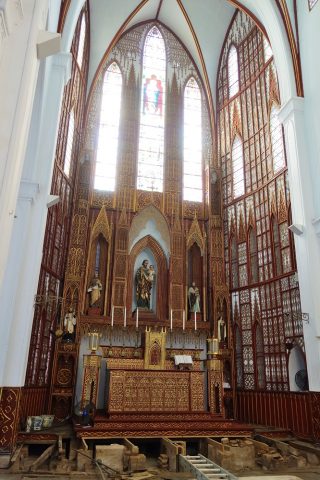 The central altar enshrines the three saints. The detailed sculptures are wonderful! The altar seems to be made of wood, and the sculptures are painted with gold lacquer. 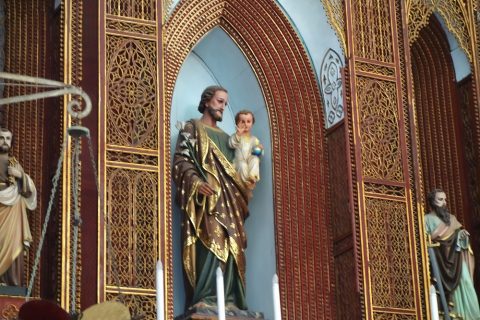 That’s why this church is called “Saint Joseph (Josef)”. 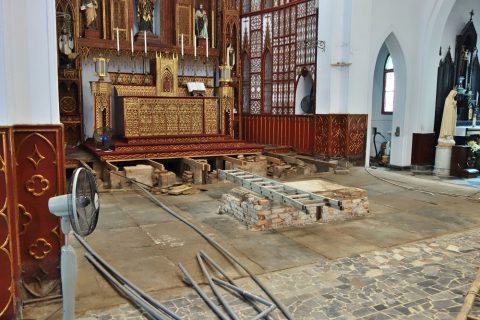 I couldn’t get close to the altar because it was under construction at that time. As you can see from the clean wall inside the church, the interior is well maintained.

Basic information on the Hanoi Church 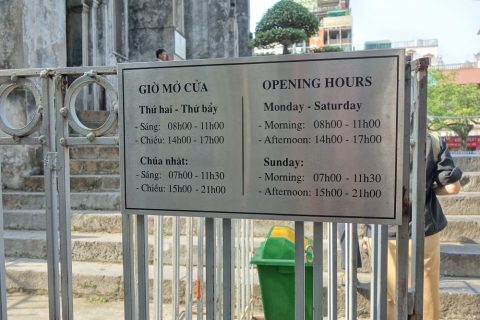 Churches in Southeast Asia are often associated with Western churches, but this is the first time I’ve seen such a grand and authentic church in Asia! In Vietnam, 80% of the people are said to be Buddhists, so it is a bit surprising that such a splendid church still exists.

Also, basically it is open all year round, but as mentioned above, the closing time during the day is quite long, so please be careful when you visit.

We went a little far from downtown Hanoi and took a bus to...

At the hotel "AUTHENTIC HANOI HOTEL" in Hanoi, Vietnam tha...

On the way back from the lunch I mentioned yesterday, I dr...

Hanoi, Vietnam is full of cheap and delicious B-class gour...