It has an Austrian calm atmosphere, but the beautiful concert hall with gold decorations and chandeliers is a rare experience in Japan. This time, I would like to see everything from how to buy tickets to the access to the venue and the view from the seats.

Most international concert tickets are available on the website, as is Graz Musikvein. This concert ticket can also be purchased from the same website. 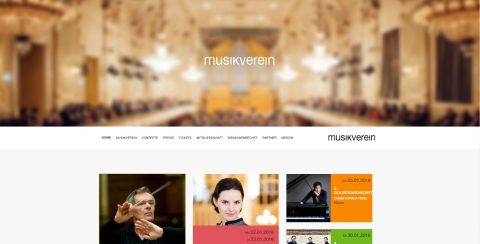 However, unlike the Vienna Musikverein HP, it doesn’t support English, so it might be a little difficult to understand. If you click “KONZERTE” from the ground menu on the top page, the concert schedule will be displayed, so I think you can get to the payment by using Google translation at the same time. 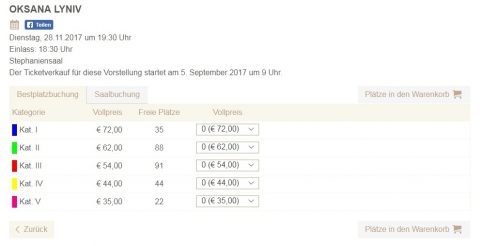 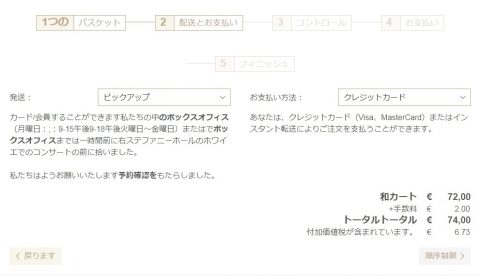 After paying by credit card (Visa or Master), you will receive a printed email and exchange it for the actual ticket at the box office on the day of the performance. I was able to pay with my JAL card without any problem.

Graz Musikvein is located right near the central square of the Old City of Graz. On the south side of the plaza, the block next to Graz City Hall will be the Musikvein building. 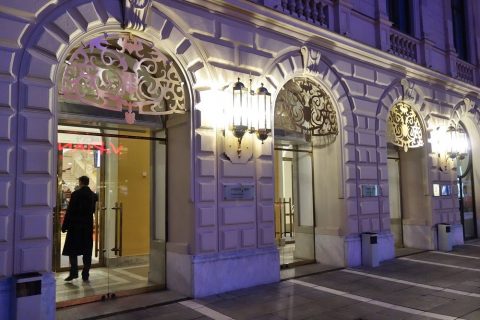 However, the entrance is behind the square, so you need to go around the building. There is no entrance with a big frontage, so I got lost for a while. …。 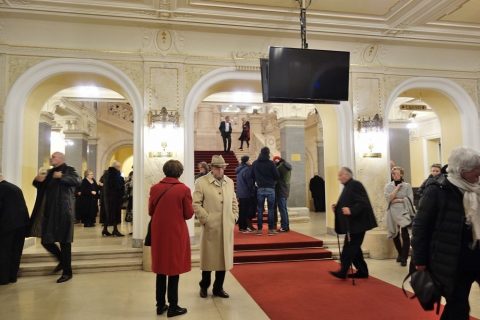 Go inside and you’ll find the entrance hall. There is a staircase leading to the foyer at the end of the red carpet, but first you exchange your ticket at the box office on the left. 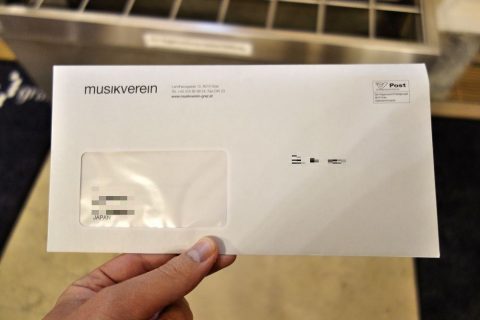 The tickets are carefully enclosed! The service of the staff was wonderful and kind, and it was quite a favorable service! There is also a cloakroom where you have to leave your coat and bag, but the tip is €1.5 which is a bit expensive.

the grand staircase and the foyer 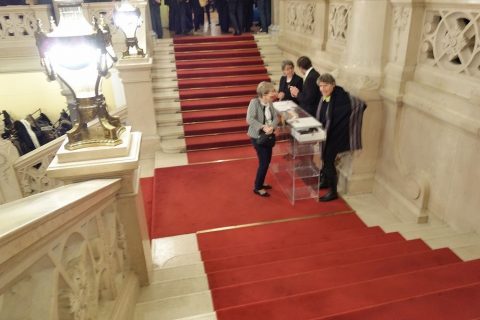 If you go up the big stairs with red carpet, you can reach the foyer. I purchased a program that was being sold in the middle of the stairs but due to confusion like the wrong change …。 I could not check the price probably around €5. 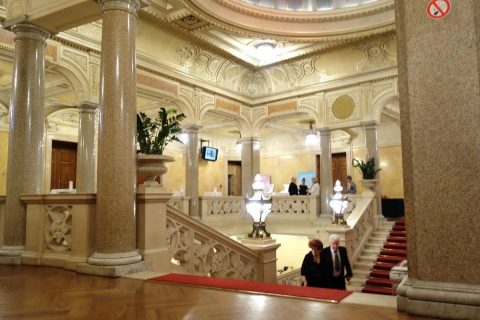 Go up the stairs to foyer. The structure surrounding the atrium that continues from the entrance hall, the cream-colored inner walls, and the gold decorations here and there are beautiful, but compared to the Vienna State Opera, the scale is small and I don’t feel the luxury that is overwhelming. 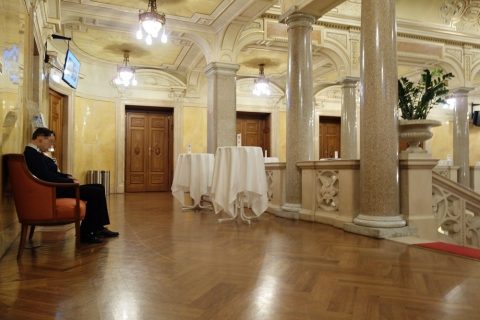 But it might be a lot wider than the Wien Musikverein foyer, which gets stuck during breaks . Each door here leads to the audience seats. 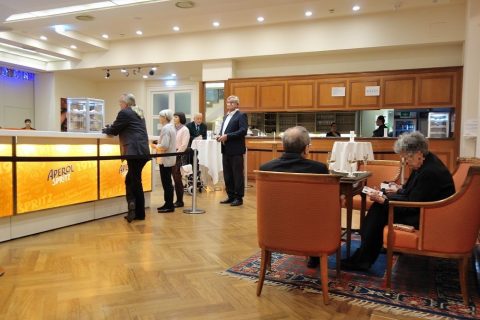 There is also a bar corner in this foyer. The menu consists of wine and alcohol, and light meals consist of just a few simple sandwiches. 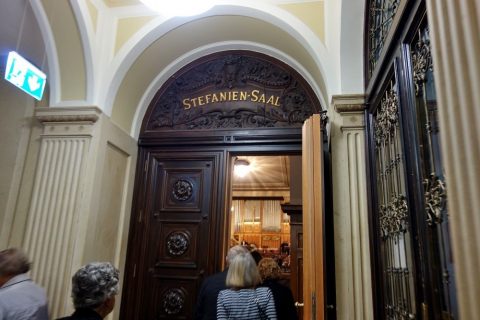 The doors of the audience opened 30 minutes before the curtain rose. The concert hall in Graz Musikvein is named STEFANIEN-SAAL. 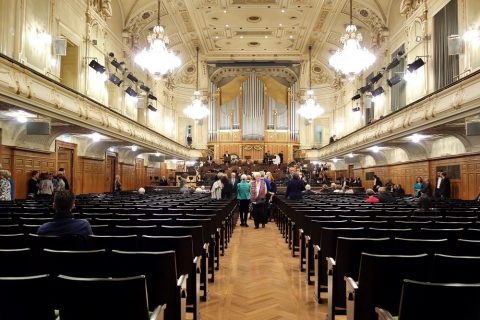 The hole is in the shape of a square shoe box. It has a capacity of 1,100, which is a little small, but it looks a lot like the big Vienna Musikverein Hall. For this reason, he is regarded as a younger brother of the hall. 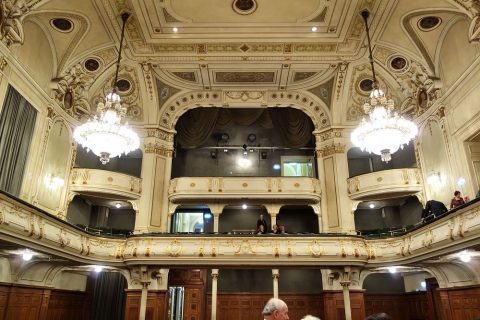 It was built between 1905 and 1908 and has a history of about 110 years. The seats are on the first floor, balcony on the second floor, and in the center, there is Galleria on the third floor. 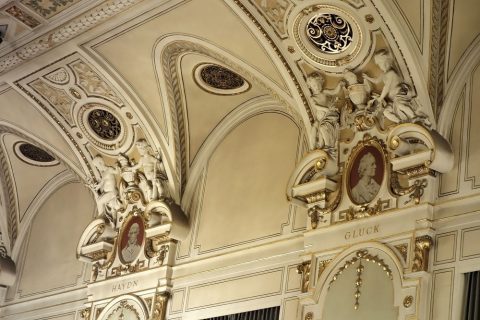 On the wall near the ceiling are portraits of 14 historical composers, including F. Mendelssohn, who was once stripped of his Jewish identity during the Nazis. It is said that it was restored in 1956, and the persecution against him extended to such places. 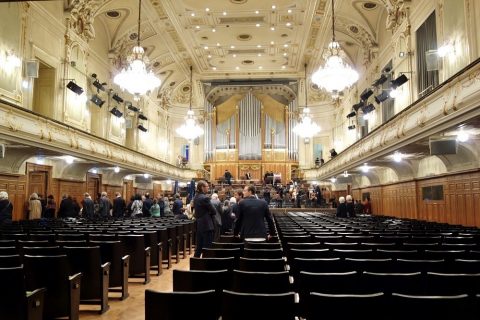 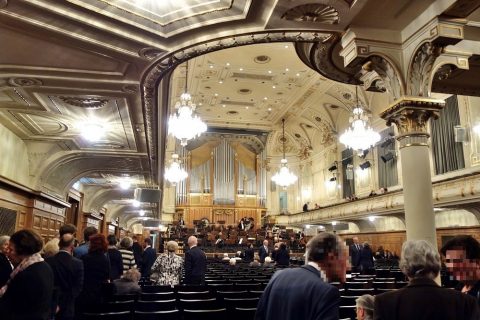 Also, two seats at either end of the line are overhung from the first floor, and it doesn’t have much height, so it feels very heavy. If you sit in a seat like this, it is difficult to hear the sound coming out to the ceiling, so it is better not to choose a seat at the far end. 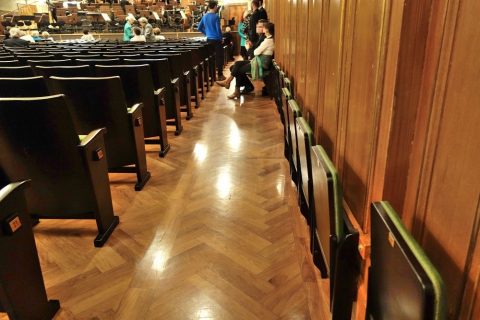 There is a seat like an auxiliary seat on the wall, but it is still a good seat. Looking at the category, it was 2 ~ 4, so the view might not be so bad depending on the place. 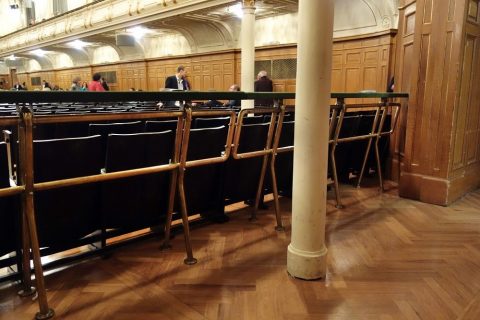 There are standing seats in the back of the last row, but no one used them for this day’s performance, and unlike …。 Vienna, this place will not be filled unless it is a very popular performance.

view from the second floor

What I designated this time was the balcony in the center of the second floor. Here, the first row is one category, and the category goes down one row at a time as you go backward. 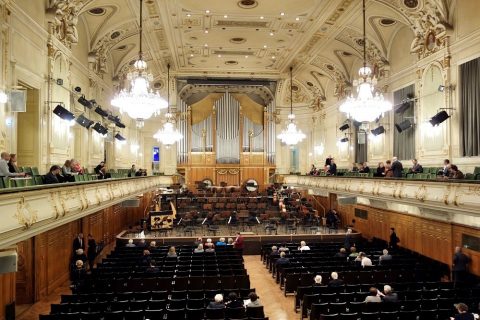 I am 1st so I am in the first row, but the view is great! Although it is a shoebox type hole, it is a good point that the distance to the stage is not so far because the hole is not so big as the cap 1,100. 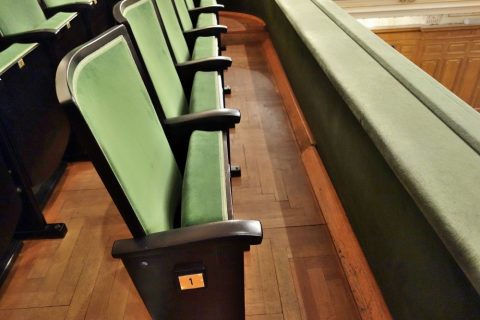 However, the disadvantage is that my feet are very narrow …。 Even if I sit deeply on a chair, my knees touch the front wall in about 3 cm. It might be better to avoid big people.

The program is as above. It starts with an overture by a contemporary composer, Miroslav Scorik, and the concertos consist of Brahms’s famous D-Dur, Debussy’s and Ravel’s “La Vals” with a break, and the end is less than 2 hours. 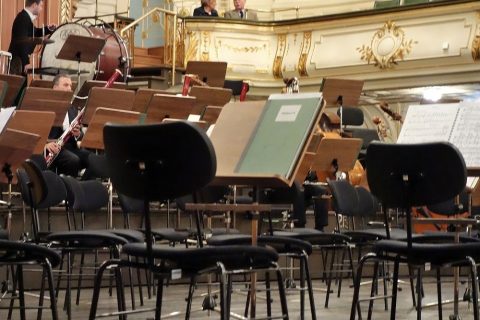 The performance of Graz Phil is not so good. The sound of the opening is often off, and the brass pipe is often pressed. Also, even when it’s forte, the sound quality may vary depending on the player, so it lacks unity. 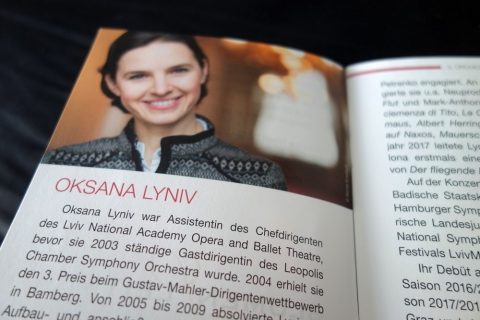 The conductor is Oksana Lyniv, a young female conductor (Age 40 yr) from Ukraine. Not only this time, it seems that there are other performances of her in this season (2017 ~ 2018), but the difference of the sound due to the difference of harmony is not clear, and I have an impression that she is not able to bring all the performers together. 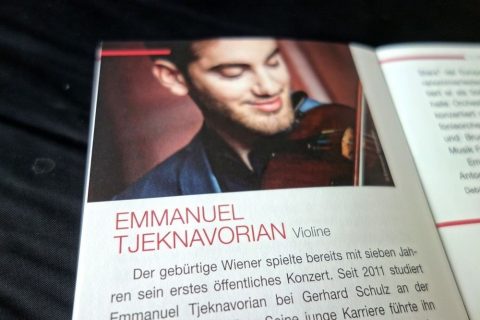 Also, the soloist is Emmanuel Tjeknavorian, a young (Age 22 yr) violinist in my hometown Austria, but I felt that the soloist was so young that he was so serious that he gave a nondescript performance. The technique is great, but it makes me very sleepy as if I were listening to a CD.

He’s still a promising young man, so I’m looking forward to his future. 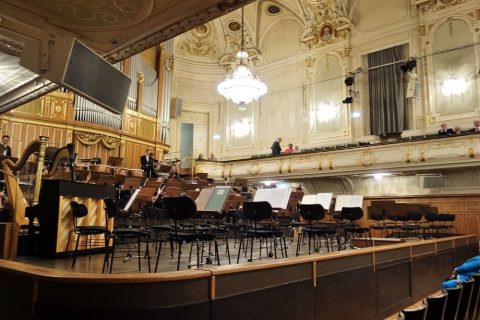 So, I told you about the concert at Graz Musikverein “Stephanie Zahr”, and I think it’s worth going to see it in the hall which has just the right size and beauty. The quality of the performance may be lower than in Vienna, but there’s a chance, and it’s hard to say. 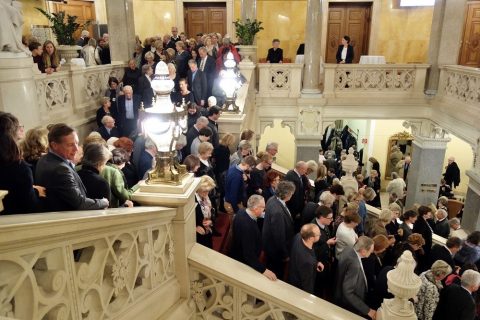 In addition, the costumes of the audience are not inferior to those of Vienna, and if you don’t dress relatively “stiff”, you may not be able to stand out. However, one of the reasons is that there are few young people (All over 50). In that sense, the number of people who enjoy classical music is not so different in Japan and Austria.