On October 17, the anniversary of Chopin’s death, “Holy Cross Church (kościół świętego krzyża)” the annual <<Mozart Requiem>> concert in Warsaw, Poland, commemorated Chopin. During the 2015 Chopin International Piano Competition, there were many tourists like me, and the concert was so crowded that I couldn’t see the stage.

site of the Holy Cross Church 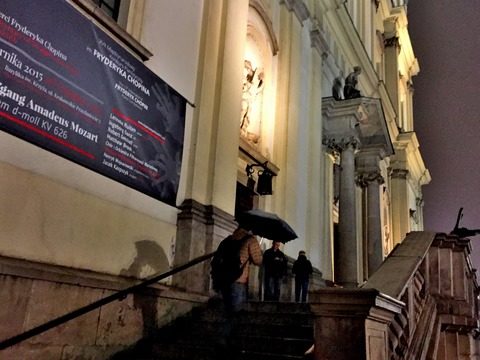 The venue, “Holy Cross Church” is located near the University of Warsaw. The curtain rises at 20: 00. According to my research in advance, since admission is free, I was informed that there is a possibility that I have to arrive 2 hours before and wait in line, but due to various reasons (If you get off the subway at the wrong station, …) I arrived around 19: 30. 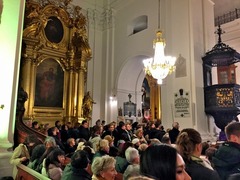 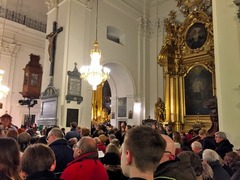 Then, there are not many people around the church, not to mention the large procession. …。 Is this place really OK? I doubted, but went inside.

Then there was a view full of people. There were so many people in the aisles, not to mention the seats, that I didn’t even know where the stage was.

Even so, I saw people who came to the hall at the same time as me moving forward as much as possible while clearing out the spectators in the aisle, so I went into a less dense place. At first glance, the passageway seemed to be packed with squirrels, but especially in the area far from the entrance, there was still enough space for many people. 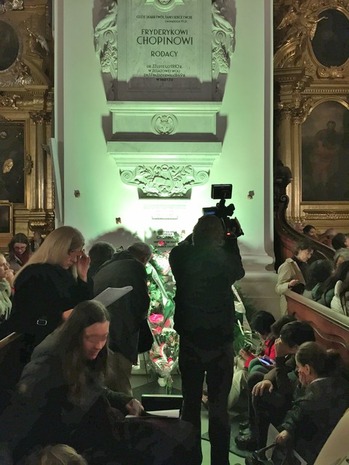 And we managed to get closer from the front row to a few meters. Strangely enough, I was able to see right in front of the pillar in which Chopin’s heart was buried, and close up at the foot of the pillar which was enveloped in bewitching light, the many flowers which lay before it. 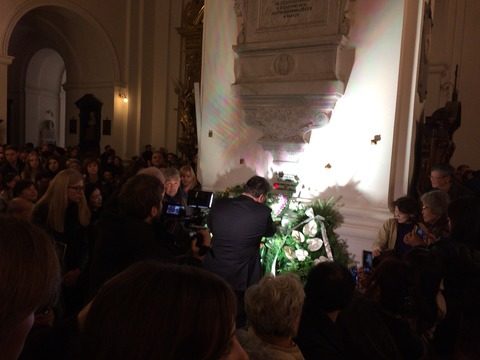 After the performance started, I thought the performance would start, but when I thought that the central passage where I am was suddenly divided into two sides like the scene in “Ten Commandments” where the sea suddenly split, a gentleman with flowers slowly appeared and headed toward this pillar. Apparently, it is a ceremony of Kenka to Chopin’s heart before the performance. 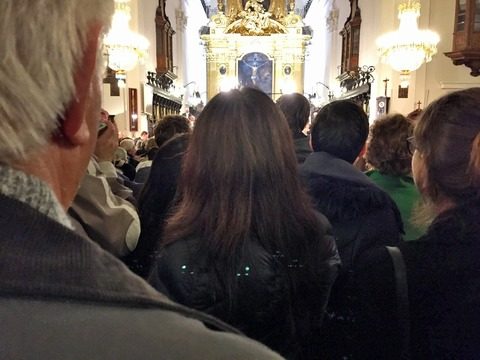 And finally the performance started. But this is my view … and the cost of being late is not small. The performance time of Mozart <<Requiem K. 626>> is about 1 hour, so if you don’t always move your legs, you get tired and can’t stand it. 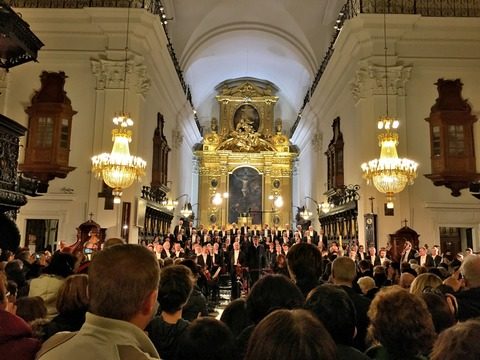 The performance made use of the sound of a church with a high ceiling and I could listen to it comfortably. Although the reverberation time is somewhat long, it is a sound that can clearly distinguish the composition of the chords without crossing them, which indicates the high level of performance. The rich reverberation reached deep into my ears, and I had a meaningful time (If your feet are not tired …).

Scene of the stage 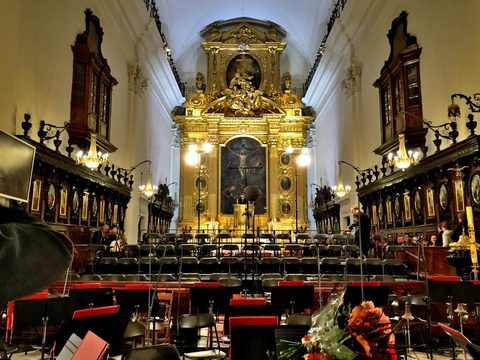 After the performance, I went to see the stage. 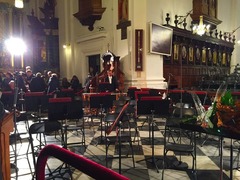 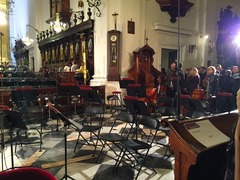 Is the configuration of the oke about 8 types? There are about 40 people in the chorus, so it might be just right considering the size of the church. I think the bass echoed well considering that. Also, is it for recording? There were microphone stands in various places. 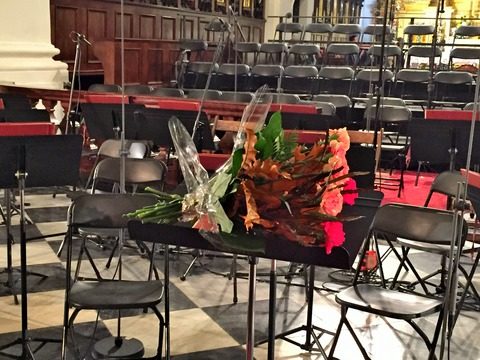 It is not dazzlingly gorgeous, but the indescribably solemn atmosphere created by the gold, red and black colors and incandescent lighting is perfect for the backstage of Requiem. If I have a chance, I would like to come earlier and see the performance up close. 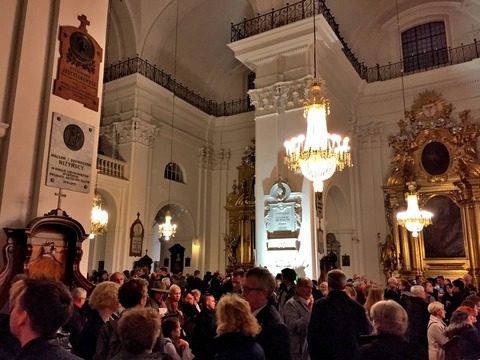 Because there are many people and the entrance is a small door, it takes time to leave. Many of the seated people spent their time sitting in their seats until the spectators made room for them.

the altar of the church and Chopin’s heart 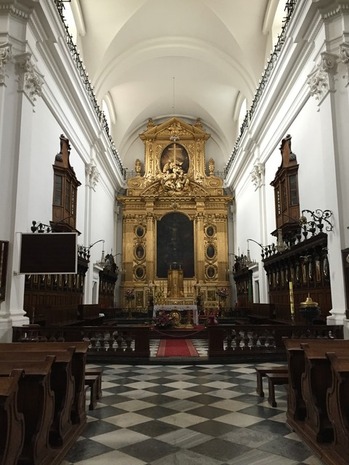 In addition, when I visited the church later, this picture was taken from almost the same place I saw this time. 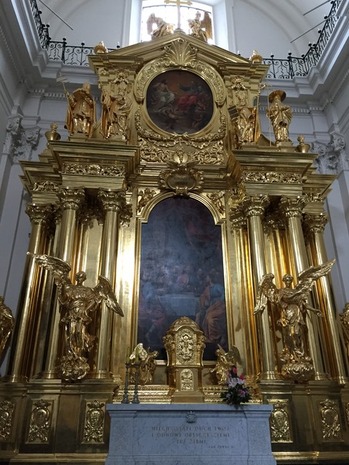 The altar is not overtly Christian, but rather solemn, elegant, and quietly shining. 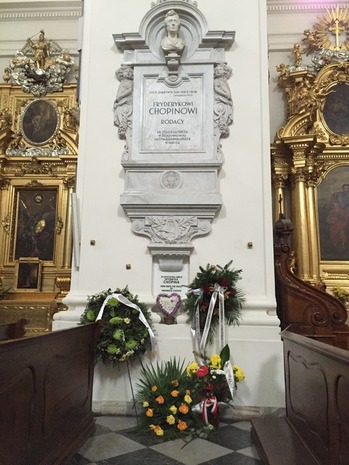 I thanked Mr. F. Chopin and vowed to do my best. 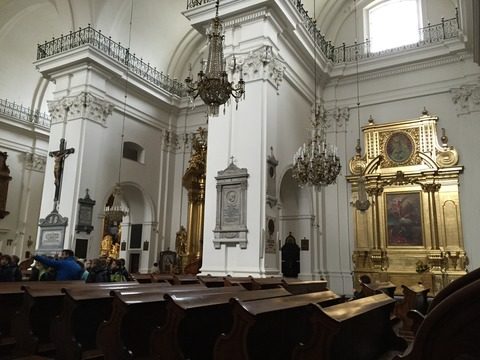 I think it is a church with a homey atmosphere perhaps because it has no gorgeous decorations. It’s a great way to relax and pray.

At the Requiem concert, which I can see for free, I felt that it is essential to arrive 2 hours before and secure a seat. However, even if you are late like me, you can listen to high quality music free of charge due to the sound of the church, so I would like you to come by when you stay in Warsaw on October 17.