A route bus that covers the entire city of Hanoi, Vietnam. Hanoi doesn’t have subways or trams, so regular buses are an important means of getting around tourist spots, but it’s a bit of a pain!

This time, I would like to tell you about how to get on and what to be careful about, based on my actual experience.

I googled for the latest bus route map of Hanoi, but it didn’t come out properly so I had a hard time finding it. I finally found this PDF.

I tried using it in Hanoi, and the bus number and route match by about 90%. On rare occasions, I thought, “What? Why are you running here?” but in most cases, the trains seemed to run as shown on this route map. Google Maps is a nice addition to Maps. When you tap the icon of a bus stop on the map, the name of the bus route passing the bus stop is displayed, and if you tap it, the detailed time is displayed.

It doesn’t seem like there is a timetable for buses, but you can use it to find out how often they run. I bought a 20,000 dong bus map at a …。 bookstore in Hanoi City, but it was written in such a complicated way that it was useless. 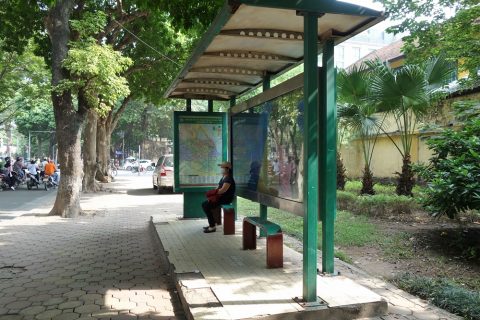 Here’s how to get on the bus! First, I will look for a bus stop, but it is easy to find the major lines that run around Hoan Kiem Lake because there is such a nice bus stop with a green roof. It’s a style we often see in Japan. 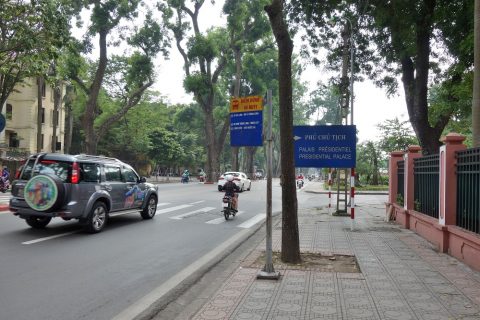 In some places a little far from the center, there is only a signboard with a bus mark like this. The name and number of the route you are going through are written under the mark of the bus, so check it and if you wait next to it, the bus will come. Other than that, there is a big bus terminal which has many lines. At the “Long Bien Bus Terminal” I used, there are about 10 bus stops, which is a bit of a problem, but the route numbers of the buses that arrive and depart are written on the platform displays, so you can just wait at the platform of the bus you want to take.

raise one’s hand as a sign to get on 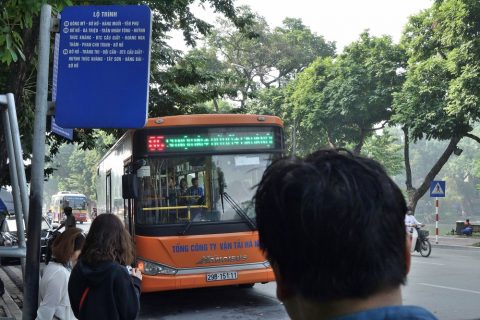 When the bus arrives, raise your hand and give a signal, and it will stop. But if you look at the locals, the ones who actually raise their hands are the minority. There seem to be many buses that stop without raising your hand, but I think it’s better to express your intention just in case. The bus is the same as Toei Bus “Get in front, get in back.”. You’ll need to get in as quickly as possible, and that’s why later. 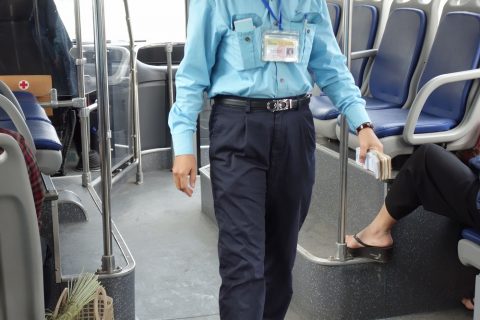 Hanoi buses do not have fare collection boxes and instead have a conductor, who comes to collect fares as soon as you get on the bus. At times, some conductors would point to an empty seat to indicate which one to sit in, but as far as the locals were concerned, they could sit anywhere they wanted. The fare is 7,000 dong. If you go to the suburbs, the price will go up a little more, but in most places you visit for sightseeing, the flat rate is 7,000 dong. When you pay the fare, you will be given a ticket instead of a receipt, so you will keep it until you get off.

You can receive the change properly, but sometimes you may be short by 1000 dong. ・・・。 Some of the conductors were young people who seemed to be teenagers. When talking with the driver, sometimes the conductor doesn’t notice, but the light blue uniform and the name plate mark it. 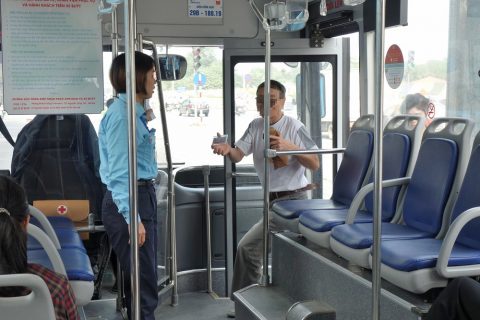 In addition, most of the local people had a commuter pass, but when I looked carefully, it was a very solid one with a photograph of the face. It seems to be very strict, unlike Japan where magnetic commutation tickets are used.

break in the buzzer and get off The inside of the bus is cool with air conditioning, and it is not crowded in most cases except during the peak rush hours, so it is unexpectedly comfortable!

As for driving, there were some drivers who drove too fast, but most of the time, they don’t drive very fast probably because the traffic flow is bad on the roads mainly for motorcycles. There is a train announcement, but I don’t understand clearly what they are saying with a voice like a karaoke room, so I watch GPS on my smartphone and push the stop button when the bus stop is near.

The button says “SOS” so I was a bit surprised when I thought it was an emergency button at first! 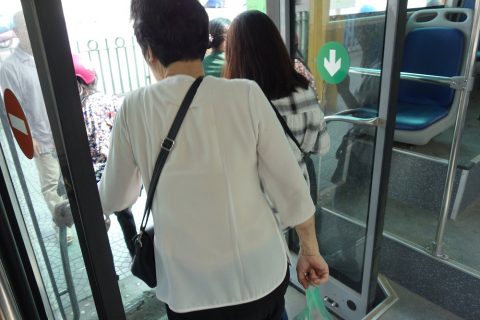 And the most dangerous part of the Hanoi bus is when you get off! When you arrive at the bus stop, the rear door (exit) opens, but if you are a little slow at this time, the bus starts moving even though you haven’t gotten off yet!

This is also true when you get on a train, so you need to get on and off quickly and quickly! 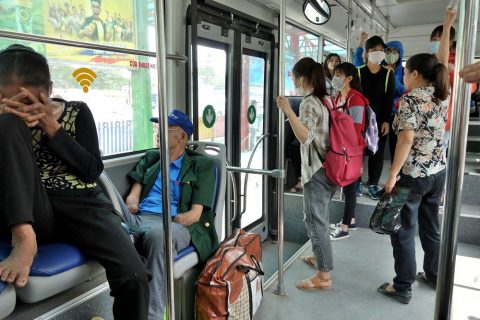 The most troublesome case is when you are the last one to get off in a group. In this case, it is certain that the bus will start moving when you get off, so the only way to prevent this is to get off before other people.

I once failed to land, stumbled, and fell on a person in front of me, so it’s really dangerous if I’m not careful enough! Like buses in Japan, “Please do not stand up until the bus stops.” is a different story in this country.

The cost performance is good, but is it for young people? 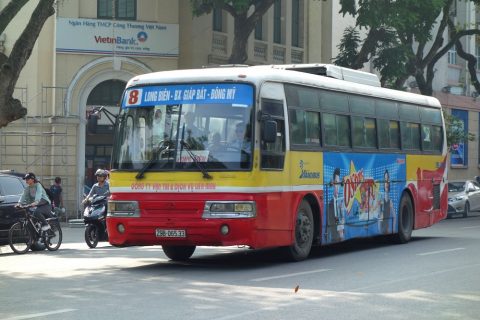 Hanoi’s regular bus costs only 35 yen. It’s cool with an air conditioner, and above all, the conductor comes to pay the fare when you get on the train and sit down. It’s VIP treatment in a way.

If you get used to it, I think it’s worth using, but if you’re not confident in your legs and back, be careful!

This time, I would like to visit "Imperial Citadel of Than...

One of the local delicacies in Hanoi, Vietnam, is a sandwi...

At the hotel "AUTHENTIC HANOI HOTEL" in Hanoi, Vietnam tha...