Continuing from last time, I will report on opera appreciation of “Gran Teatro del Liceu” at Opera House in Barcelona, Spain! Gran Teatro del Liceu, an opera house in Madrid with its luxurious auditorium and ballroom. What surprised me was that there was even a free wine service after the performance!

Seat map and panoramic view of the seats Then let’s go to the auditorium! Check the Floor and Gate on the ticket and enter through the appropriate door. The Gran Teatro del Liceu seats are six levels in total, from the first floor to the fifth floor. Just looking at the seat map, it’s quite a magnificent view. First, I looked at (from the top floor) from the top, and it was quite gorgeous! It can’t compete with Garnier in Paris, but the gorgeous decoration is amazing!

It’s a world away from the Zarzuela National Theater in Madrid. It is surprising that there is such a big difference even though it is the same Spanish Opera House! A beautiful egg-shaped auditorium. Not only this Gran Teatro del Liceu, but also the auditorium of the Opera House is called “horseshoe shape” because its shape resembles a horse’s feet. 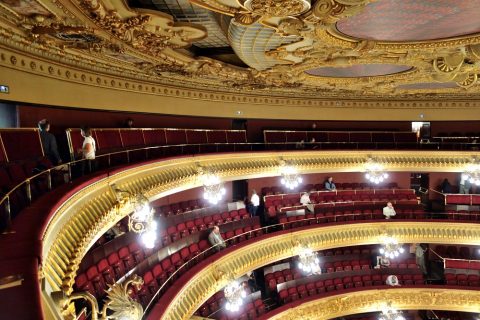 This Gran Teatro del Liceu has only two columns at the top. You don’t have to look down from a steep slope like Madrid’s Teatro Real, so people with acrophobia may feel at ease (lol).

What is the view from the Hiradoma seats? After that, they came to Hiradoma seats! The view of the stage from here is amazing! As for the size, I feel the frontage is a little narrow, but it’s tall, so I don’t feel it’s too narrow. The design of the ceiling is quite distinctive! I get the impression that a UFO is coming down. I think one of the reasons why it looks like that is that it uses lighting other than a chandelier. There is an aisle in the center and there are 20 rows of seats. The feet are especially wide in the first row. As there is an orchestra pit, there is a certain distance to the stage, so it is not difficult to see the stage too far ahead, and I think it is probably the most popular seat. However, the overhang of the upper floor is bigger than I expected, so the seats at both ends and at the back of the floor are limited in terms of both the view and the sound even if they are the same floor. Even so, the category is expensive at 2 ~ 3, so the cost performance around here is pretty bad. My seat this time was on the 2nd floor (third floor of Japan), the first row 86 on the right side of the balcony. If possible, I wanted to go a little closer to the center, but I had no choice because of the budget …。 The distance from the stage is close, but the view is not so good even though it is the first row, and more than half of the stage will be hidden if you don’t get up. Also, the seat is made so high that you can’t put your feet on it and it is not comfortable to sit on …。 Still, it is located right above the orchestra pit, so you can hear the sound of the orchestra well. The songs of the cast often come, so it may be good for listening to music.

However, it was good that the seats next to each other were aisles and vacant seats this time, but if there were people on both sides, it might be hard to look at the stage and listen to the sound …。 Well, this performance is “Manon Lescourt”. It’s a well-known opera by G. Puccini. It was after I saw a super opera in Madrid, so I felt something new in the orthodox classic opera I saw for the first time in a while! Translation subtitles are only in Catalan, but Puccini’s music is easy to listen to because of the harmony and the long melody of the phrase, so the music is very good! The quality of the stage set is good, and it is dynamic and powerful. As expected, there are expensive tickets. Next, let’s take a look at the social gathering place during the break! The Gran Teatro del Liceu has a large underground lobby with tables and bar counters. There are things like sound equipment, but there may be some events held here. I was the first to visit after the break started, but the wine and food were already served at the table! Both of them showed “reserved seat” so I guess you need to make a reservation in advance, including the food. It seems that anyone can use the counter table, but it seems difficult to secure it because the number is very limited. Even so, I often think that everyone eats and drinks like this in only 25 minutes break time …。 I looked for the Bar menu but unfortunately I couldn’t find one with a clear price and instead of …。 I found the total menu and 5 sandwiches, both priced between €5 and €4.5. The Madrid Opera House only had a limited number of people going out to socializing, but it’s a huge success! Even in the same Spain, Madrid and Barcelona are so different. Finally, what surprised me was the entrance lobby after the performance. After being mobbed by people towards the exit … There was an employee who poured wine into a large number of glasses. Free wine service! It seems that wine is served to all the audience for free. In addition, they offer both red and white! I tried both of them because they were too strong, but the white one has a light taste with no emphasis, but the red one has a firm taste with a pleasant bitterness!

I was interested in this brand, but when I looked at the staff’s hand, I could see the word “SUMARROCA”. “Sumarocca” is a Spanish sake brewer’s wine and a bottle of it can be bought for around 1,500 yen in Japan.

That said, I’ve never seen such a free wine service at the Opera. The expensive tickets might be the reason why they spend money on such places.

Can I get in with a cheap ticket?

So, although I told you about the Barcelona Opera House “Gran Teatro del Liceu” for 2 times, I was able to immerse myself in the elegant mood after a long time since I saw the less luxurious Madrid Opera House! 1st category tickets are very expensive, but there is also a discount ticket for €13 for the lowest category, so you can enter for preview. But you shouldn’t expect much because free wine service is not always available.

That was Gran Teatro del Liceu’s opera review report! Please refer to the previous article about tickets and venue access.