Following on from our previous coverage of the Dubai Metro, this month we’ll be reporting on the details of Dubai’s “tram” trams, including how they look inside the cars and how to get on them.

It’s a tram in Dubai that runs through the Marina area, but I was surprised to see a magnificent station building that doesn’t look like a streetcar! The inside of the car is clean and new, so it’s a very comfortable ride. 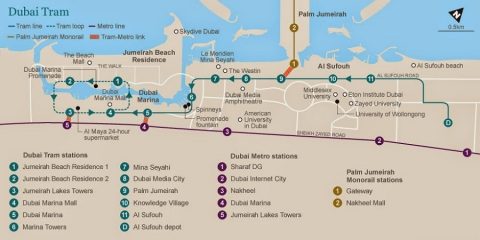 In Dubai, trams run in the Marina district near Palm Jumeirah. Currently, there are only 1 bus route and 11 bus stops. They connect to the Dobby Metro Red Line at Nakheel Harbour & Tower and DAMAC stations and to the Monorail at Palm Jumeirah Station. 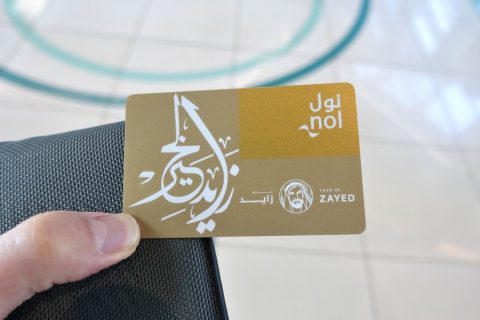 The fares and ticket types are the same as those of Dubai Metro, and passengers can transfer within the same zone. You need an IC card “Nol Card” to get on the train. For details, please see here → Required for Dubai Metro! Nol Card details and route map

A magnificent station building! There are platform doors. 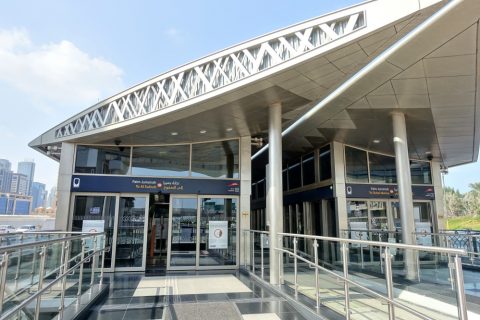 When it comes to tram stops, I imagine something as simple as a bus stop, but the tram in Dubai is so well-made that it’s hard to believe it’s a stop! There is a platform for each direction, and there is a platform inside the glass door. 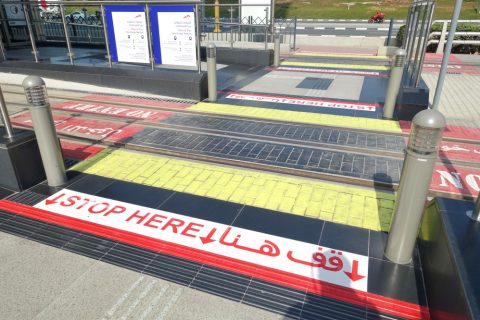 There is a railroad crossing at each end of the station. You have to be careful when you cross because the crossing gate doesn’t come down like in Japan. 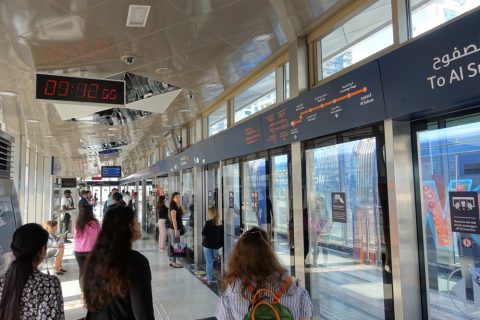 The station building is air-conditioned and cool, and the platform is equipped with platform doors that extend to the roof. I’ve never seen such a secure tram stop!

Touch to get on and off 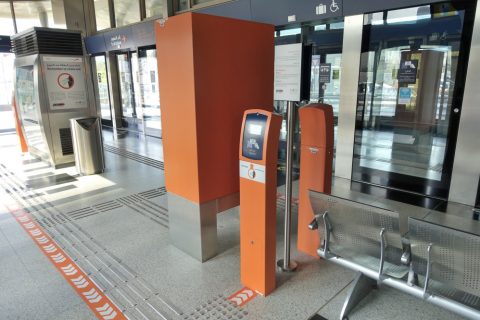 There is an orange ticket gate on the platform, and you touch the Nol Card on the reader and get on the tram. When you get off, you also touch it at the destination station.

There is no place to touch in the tram, so if you forget it, it will be treated as a free ride, so please be careful. 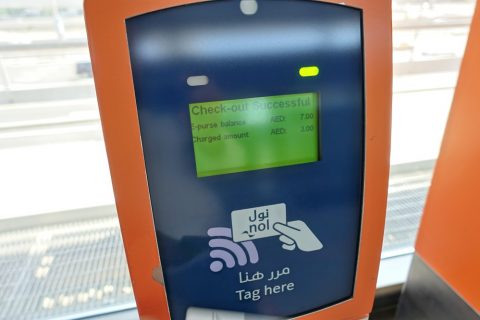 Card balance and fare amount are displayed on the LCD screen. 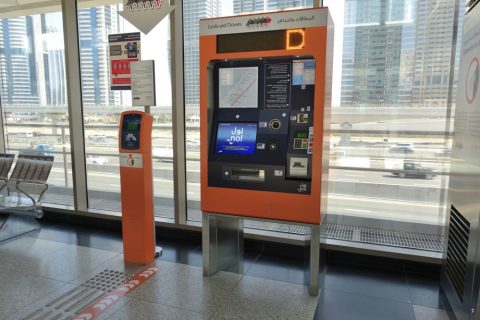 There’s also a Nol Card vending machine on the platform, so you can top it up (Charge). It accepts credit cards, but I still can’t use all my credit cards …

There are women’s cars and gold classes. 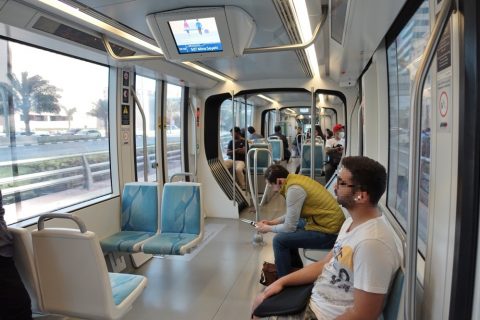 The inside of the tram is a standard type that can be found in any country. All trains stop at every station, so there is no stop button like a bus. I checked the station on the LCD monitor. 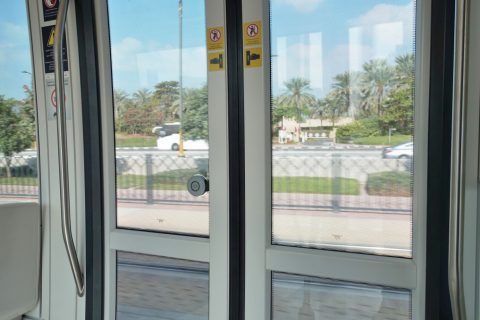 There was a button on the door to open and close, but as long as I got on the train this time, this button was not used, and even if I didn’t push it, the door was opened automatically when I arrived at the station. 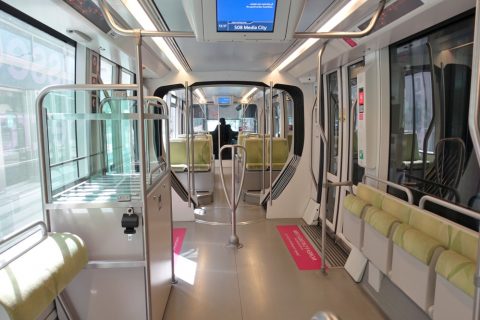 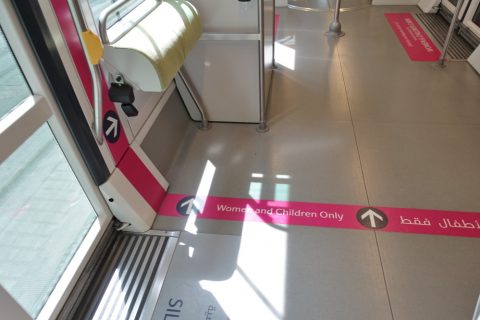 The first car and half of the second car are for women only. Like Dubai Metro, there is a pink line on the train. 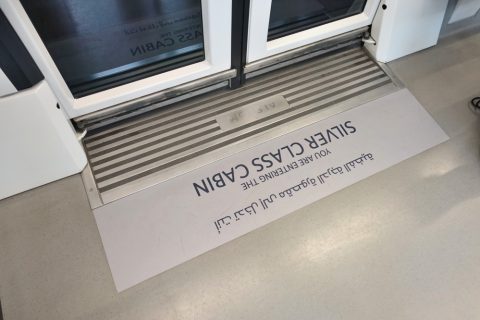 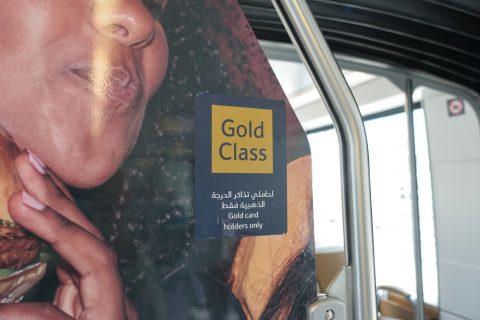 There is also a silver class and a gold class in addition to the Metro. Gold Class is in the first car on the opposite side of women-only car. 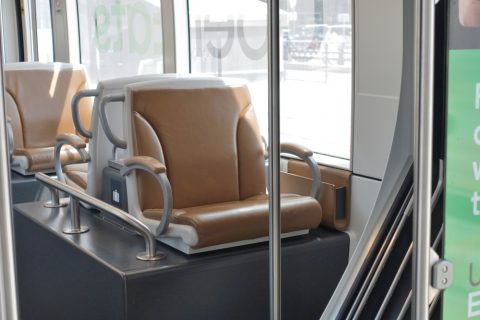 Gold class seats are specially designed with armrests. However, as far as I saw, there was no one using it. It is not a long distance like metro, so I think there is little demand for it. …

Can’t you enjoy the view from the window? 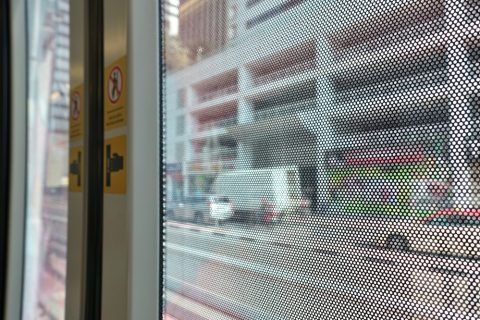 What I felt a little disappointing on the tram was that I couldn’t see the car window very well. When I look at the window from inside the car, it’s covered with black dots like this, so I can’t see the view clearly. 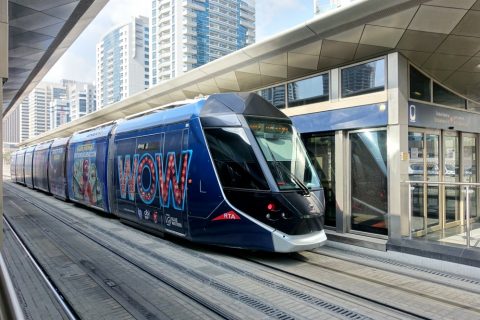 This is an ad on the outside wall. I sometimes see it on Japanese railways, but the window is completely blocked because it is drawn on the whole surface including the position of the window.

In Dubai, which is known as a scorching hell with 50 degrees outside in the summer, direct sunlight can be blocked, but it’s a shame for tourists who want to enjoy the scenery … 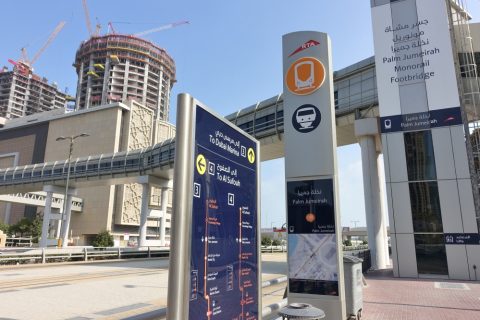 Here’s a look at trams in Dubai’s Marina district. For more information on the Dubai Metro, see the article “Dubai Metro Anatomy! How to get on and the equipment in the car/Is the cost performance of gold class bad?“.