an artificial island “Palm Jumeira” in the shape of a palm tree famous in Dubai. One way to get there is the monorail called “Palm Monorail”. You can take it easily just like metro and tram, but you can’t use the common CI card “Nol Card”, which is a little inconvenient. …

I would like to see how to buy tickets and ride the monorail in Dubai in detail.

The monorail in Dubai runs on the man-made island of Palm Jumeira. It is an island shaped like a palm tree, and is a luxury resort area that symbolizes Dubai. This time, take a monorail and go to the terminal station of Palm Jumeirah “Atlantis Aquaventure Station”!

There are four monorail stations in total. However, Nakheel Mall Station was not open when I visited, and I could only get on and off at the other three stations. It’s been 10 years since it opened (2009 establishments), but is it still okay like this? …? 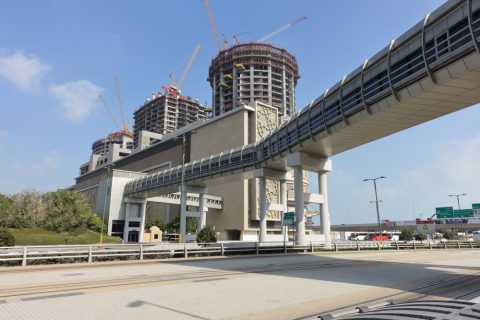 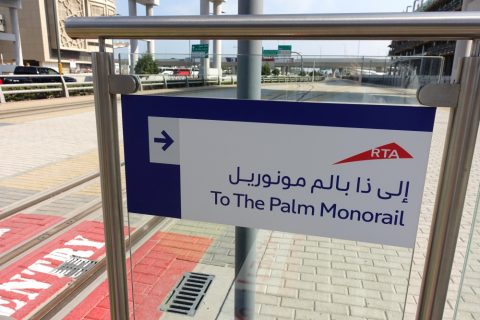 The starting station was “Gateway Station”. It’s directly connected to Palm Jumeirah station on the tram, so we’ll head there first. It is inconvenient that it is not connected to the Dubai Metro station. … 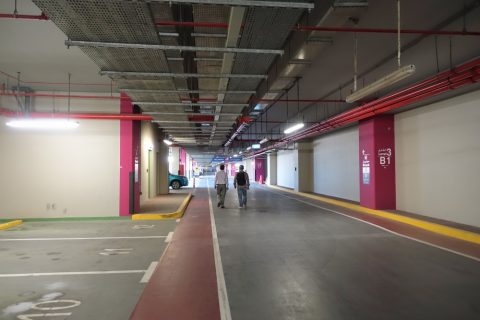 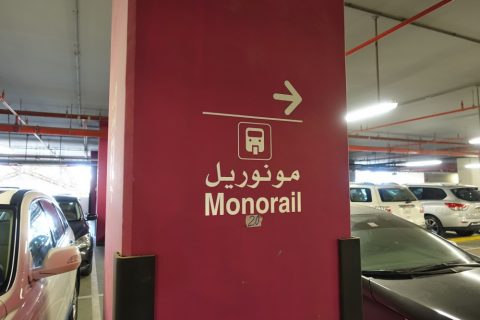 The transfer at Palm Jumeirah Station is also quite a long way, and you just walk around the parking lot. If you follow the “Monorail” sign and walk, you will eventually get there, but it is dangerous if you are not careful because cars sometimes come in and out. 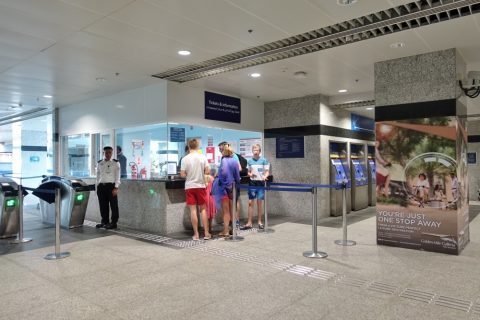 Passing through the parking lot, you will find the monorail ticket gate. There is a window next to the ticket gate. You can buy a ticket here. 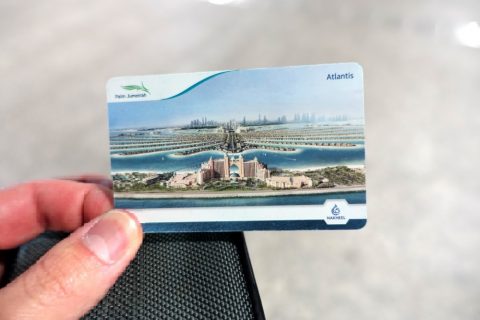 The fare is 20 DH for one way and 30 DH for round trip with discount. The ticket is an IC card. Also, you cannot use common IC card “Nol Card” like metro or tram. 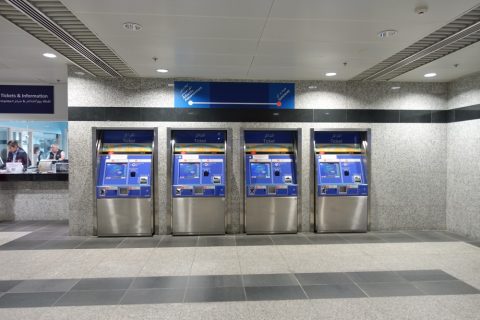 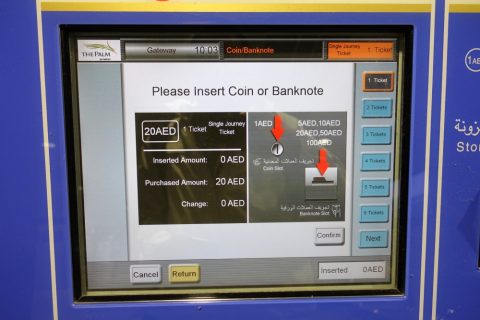 Tickets can be purchased at the ticket machine next to the ticket window, but for some reason it doesn’t accept round-trip tickets and you can’t use credit cards, so it’s better to go straight to the window. 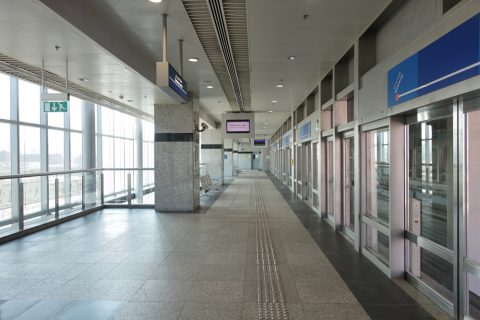 Go through the ticket gate and go upstairs to the platform. It has a platform door, and the platform is separate for getting on and getting off. This is a clean home with no dust. 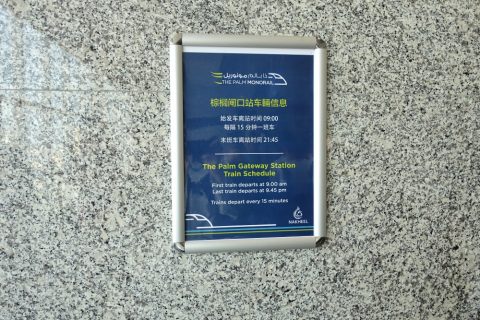 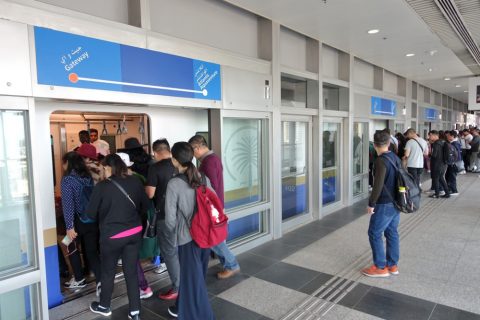 The train arrived three minutes before departure. There seems to be a big difference between the crowded trains and the empty trains even in the same time zone, and the train I tried to get on was occupied by a Chinese group (lol). I saw 1 of them off and it was empty so I was saved …!

Made in Japan, front seats are very popular! 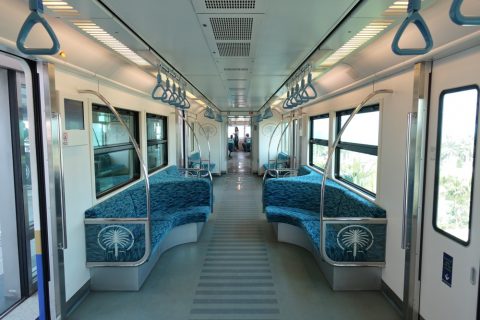 The monorail looks like this. It is not a general arrangement of seats, but arranged like Disney Resort Line. The train consists of three cars. 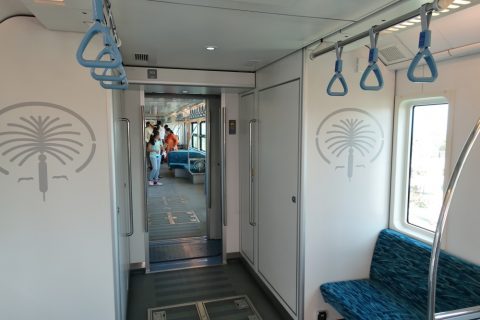 The monorail was manufactured by Hitachi, Ltd. of Japan. Now that you mention it, the interior of the train and the shape of the strap are the real Japanese railway! If you look at the end of the car, you can see the word “HITACHI”. 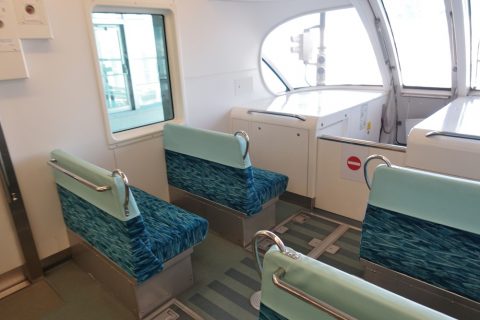 The front part has a cross seat like this, so it’s good to enjoy the scenery! I got this seat in front of the queue, but maybe because of the popularity, if I don’t line up very early, it will be taken quickly. 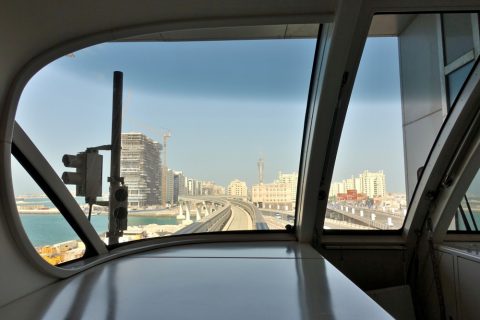 This monorail is driverless and self-driving, so it’s perfect to see the view from the front! There is a windshield wiper on the right side of the window, so if you want to sit down, I recommend the seat on the left side!

The view from the window is …? 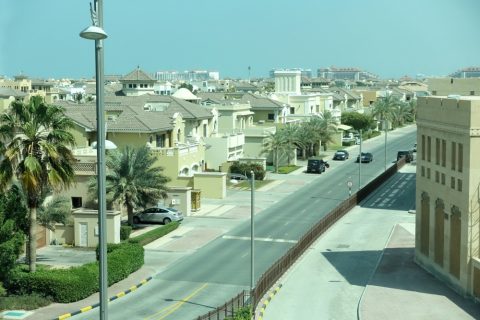 The final stop, Atlantis Aquaventure, is about 5 km away. It runs at a slow speed in the luxury villa area of Palm Jumeirah. The monorail runs on elevated tracks, but at this height, you can’t see any palm tree-shaped land, so it doesn’t feel like it’s running in a very special place. 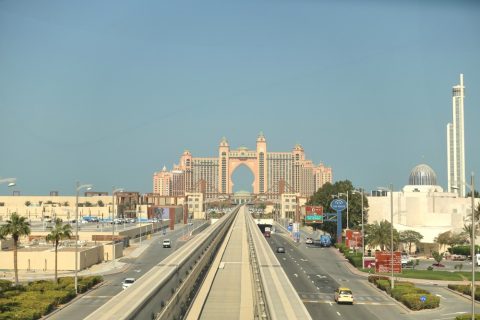 However, you can see Atlantis the Palm Hotel coming closer from the front seat. In that respect, if you want to enjoy the view, I definitely recommend the front seat! 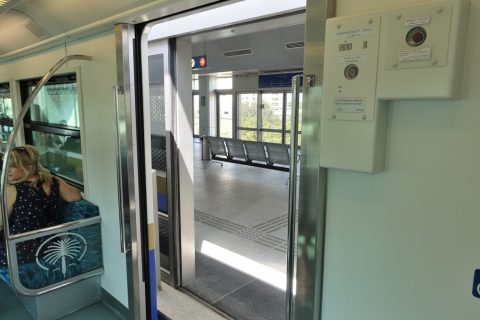 The train also stopped at Nakheel Mall station, which is supposed to have not opened yet. It’s not treated as a passenger, but the station itself seems to be almost completed, so I think the opening day will be soon.

IC cards are collected at the end 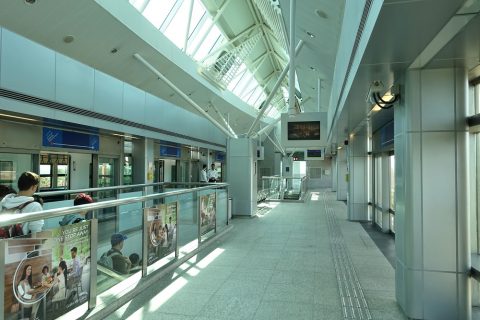 Arrived at the terminal station Atlantis Aquaventure, about 10 minutes from the first train. The platform is not divided between boarding and alighting, but you can’t turn back and get off if you try to stay inside even a little. 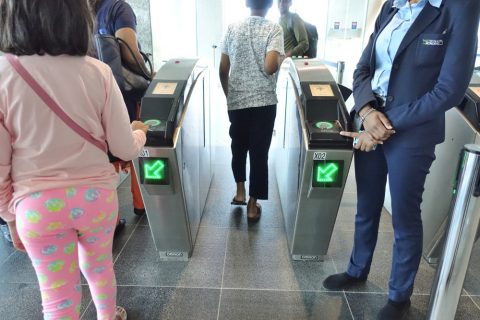 It is probably because I use the IC card repeatedly, but I wanted to keep it as a memento, so I’m sorry … 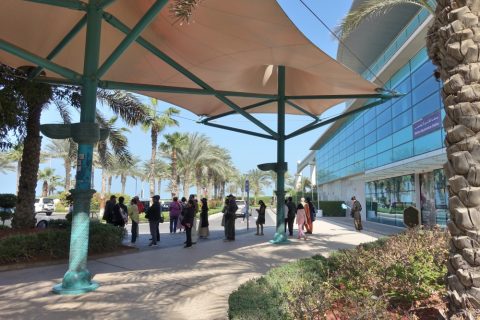 That’s why I told you about the monorail to Palm Jumeirah in Dubai! Next time, I will report the aquarium in Atlantis Aquaventure.