This time, I will report the concert hall “Casa da Música” in Porto, Portugal! Opened in 2005, the contemporary concert hall has a unique world view with a simple and inorganic appearance, accented by gold decorations, and is open for tours.

I would like to tell you more about the concert hall in Portugal. 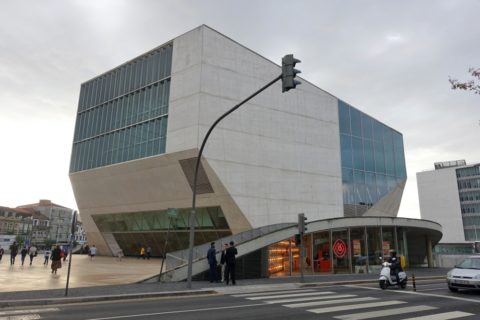 A modern building with white walls and glass walls. It’s not as big as I thought, but there are two concert halls, big and small, inside. Designed by Dutch architect Rem Koolhaas (Rem Koolhaas) and opened in 2005. 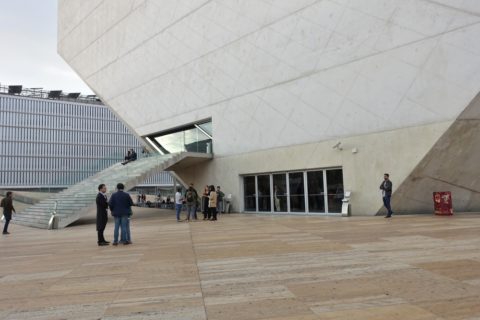 The entrance is on the south side of the building. If you go up the stairs, there is a concourse where ticket offices, information and gift shops gather. There is a cafe restaurant on the ground floor below the stairs, and you can go up from this floor by elevator. 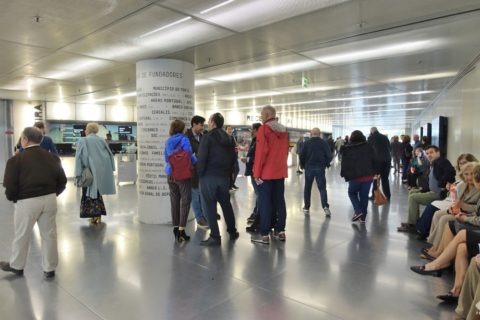 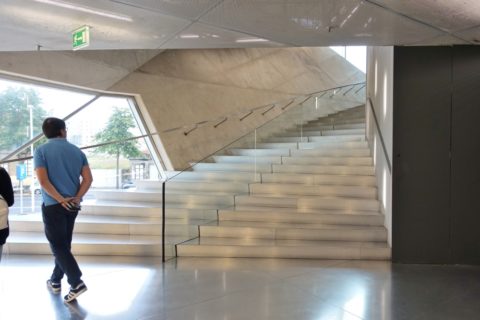 If you go up the stairs at the back of the concourse, you will arrive at the foyer of the main concert hall “Sala Suggia”. There are some places that are a little hard to understand without a big guide sign, but the staff standing around there will tell you so kindly that you don’t have to worry! 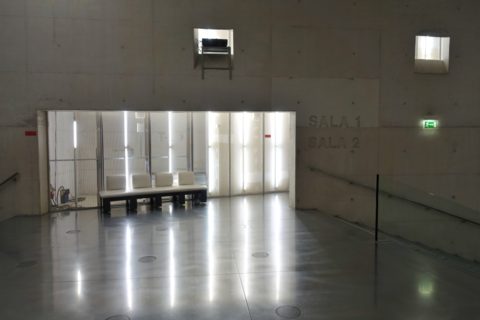 If you go up the stairs, you will find the foyer … of the concert hall, but in reality, there is no large room that can be called a foyer, and there is only “stair landing” in the inorganic interior with raw concrete.

It is far from the most beautiful concert hall in Western countries. …。 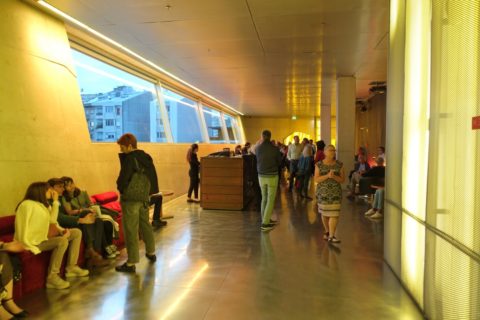 However, there is a bar area in one corner of the foyer, which seems to be the only place to socialize. There is a bar counter in the back, and sofa seats and tables are also placed along the wall. 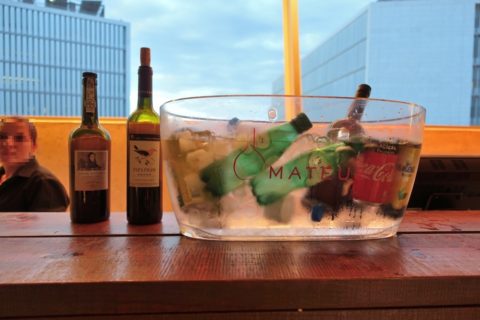 The bar doesn’t have much on the menu, with just two kinds of wine, plus some coffee and soft drinks. I don’t know the price because there was no menu display, but when I checked the wine on the counter, they were all about 1,000 yen.

But it is only at a concert hall in Portugal that you can drink port wine called “DONA ANTONIA”. 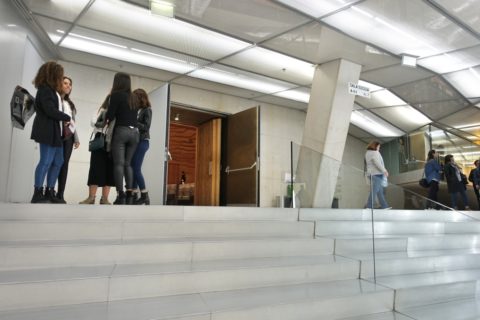 Now, to the audience! Tickets are checked at this entrance. 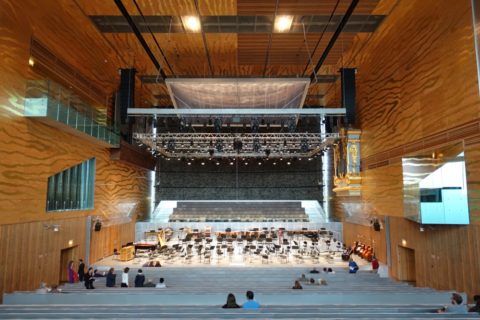 Concert hall “Sala Suggia”. The main hall of Casa da Musica has a capacity of 1238 seats. The hall was named after Portuguese cellist Guilhermina Suggia. 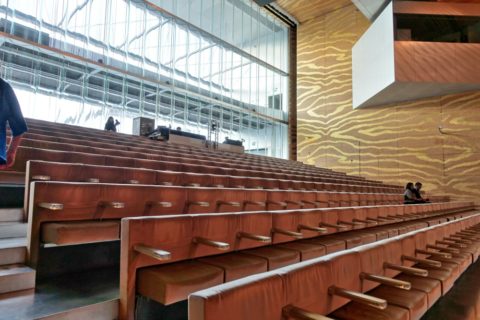 This hall is designed to take in a lot of natural light, and the back of the seat is see-through glass and bright. 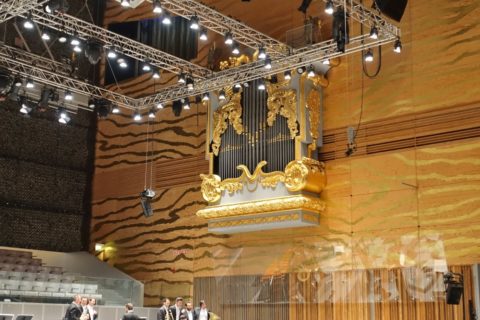 In addition to the gold pattern on the inner wall, there is also a pipe organ decorated with gold on the side of the stage, and it is nice that although it is a modern hall, you can feel a little old-fashioned and unique world view!

The chair is sliding. 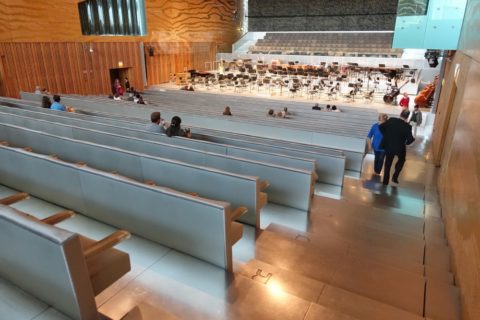 The seats in this hall are only Hiradoma seats on the first floor. You can see some balcony seats on the upper floors on both sides, but they were not open for this performance. 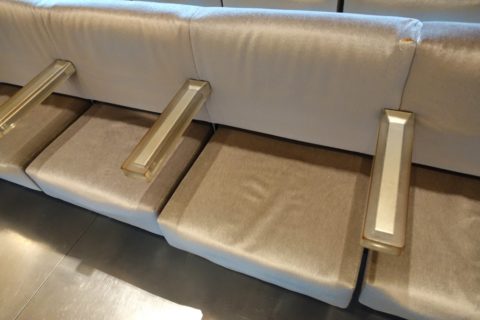 The shape of the seat is a little special: when you sit, the seat slides forward and snaps into place, and when you stand up, it returns to its original position. It has a wider foot space than a normal folding chair, so that other customers can pass it easily even if they sit for a long time. 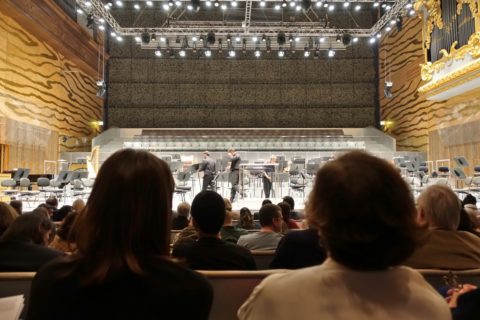 My seat this time is in the middle of the ninth row from the front. It is arranged alternately in front and back, but there is little difference in height between front and back around here, so it is a little difficult to see the stage.

If you are particular about the view, the area behind the central aisle (From Column L) might be just right.

Does it sound better than I expected? a program of only modern music 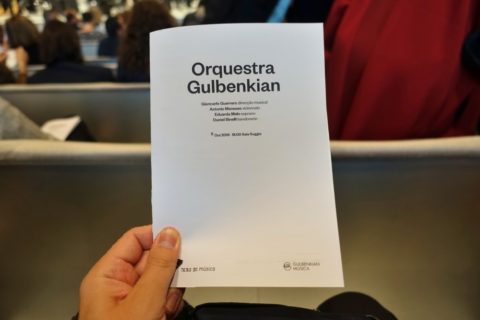 As for this program, the first half is only modern music, and the second half is composed by modern composers such as Piazzolla.

You can get this program for free from a pile in the foyer. 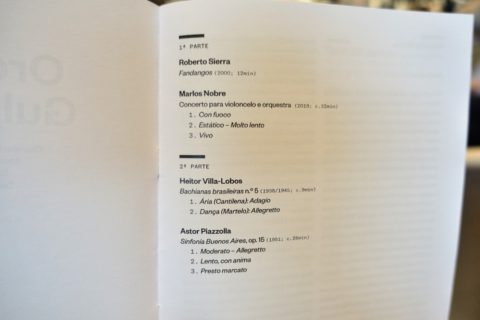 I thought it would be boring because all of them were modern and modern works, but there were also folk dance songs and songs with an atmosphere like film music, so even amateurs could probably enjoy the contents. 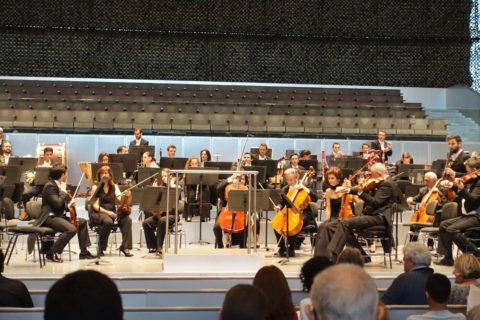 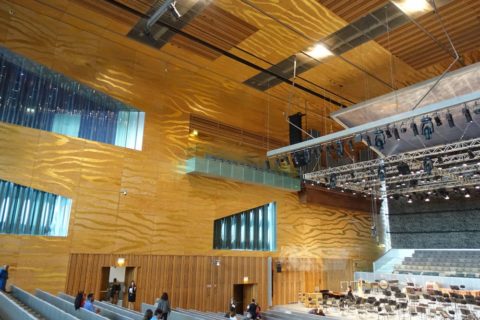 As it is the same no matter who plays it, I think this is probably due to the sound of the hall, but according to the explanation of HP, the hall has an acoustic design to create an ideal reverberation time, and has a reputation for sound.

Sure, the sound is well balanced, but for some reason the cello’s range is erased …。 Well, it depends on where you sit.

Tickets can be purchased from the official website. There is also a guided tour. 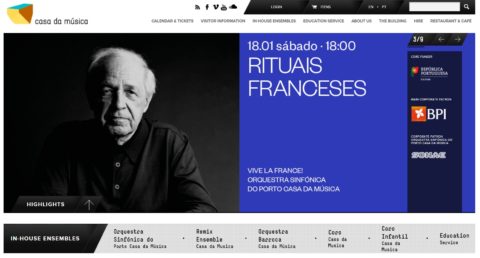 Also, I bought the ticket for this performance from the official website of Casa da Musica. You only need to register your name, email address and password. 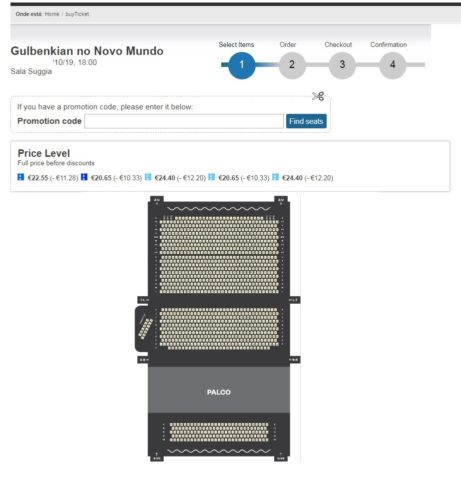 You can choose a specific seat, and after you pay by credit card, you will receive an e-mail with your ticket. The ticket price is reasonable, and it is a fraction of the price in Vienna! I’m glad that I can watch the concert easily. 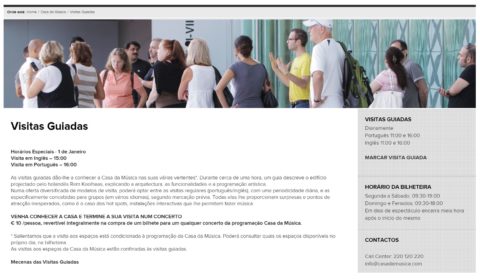 The Casa da Musica also offers guided tours, held at 11: 00 and 16: 00 twice a day (€10). It is only available in Portugal and English, but there are optional plans for backstage tours and port wine tasting, so just looking at the hall may be better than visiting a concert.

There are VIP rooms that you can’t enter without a tour, so if you are interested, please try it! (For more information, see HP) 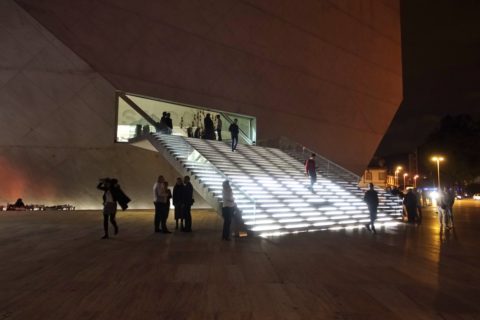 So, it was a viewing report at the concert hall “Casa da Musica” in Porto, Portugal!