The Portuguese city of Lisbon has many steep slopes, served by the cable car, which opened in the late 19 century. It was originally opened as a means of transportation for citizens, but now it is only for tourists, but people talk about it because you can take photogenic pictures along the line!

Lisbon has 3 cable cars, each named “Lavra” “Gloria” and “Bica”. The Bikka Line runs close to the river, so the view from the top of the hill is good and it is the most popular line among tourists.

The operating hours of each route are as follows.

*Refer to the official website for details such as the timetable. 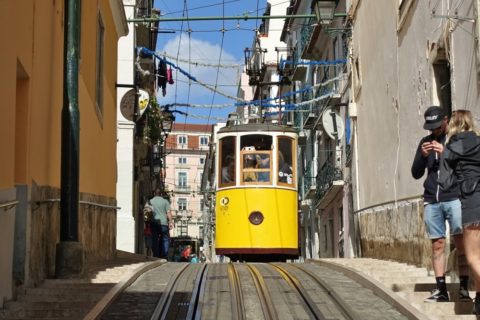 Each cable car has the same yellow retro body as a streetcar. It is currently operated by a pantograph, but at the time of opening, it was operated by steam.

It’s a beautiful car that blends in with the city’s landscape, but some of the cars are covered in graffiti and in primary colors …

Most popular with tourists “Bica line” 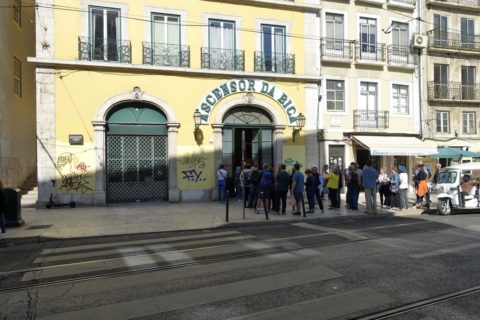 The Bica line is the most popular among tourists. There is a bus stop along São Paulo street which is close to Cais do Sodré station.

There is a ticket gate with an attendant inside the station building, and you pay the fare there. It costs €3.5 for tourists, but you can use the same Viva Viagem IC card as the subway, so it’s best to use that 1 day ticket if you want to take it!

Viva Viagem is explained in detail here → Lisbon [subway and bus] route MAP and how to get on! 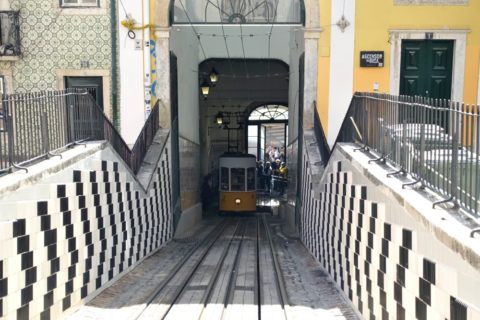 The Bica cable car runs about every 15 minutes. During the busy season when there are a lot of tourists, there are times when the number of trains increases, but at this time the train was almost on time even though there was a line outside the station building … 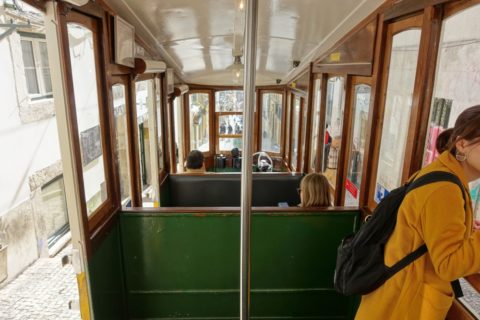 Inside the cable car, there are three separate guest rooms with opposite benches. You can ride standing up, but the space at your feet is very limited, so the capacity is small. It is a little bit hard to ride this packed. …

You can also walk up the tracks 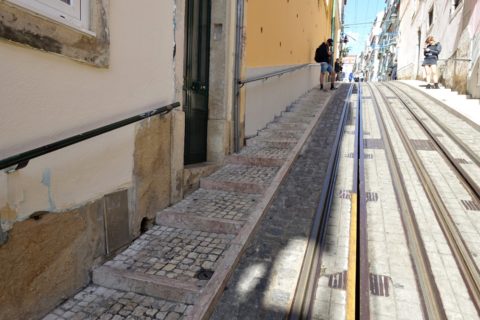 There is a sidewalk beside the cable car tracks, so you can walk up there. The sidewalk has stairs and handrails, so it’s safe. 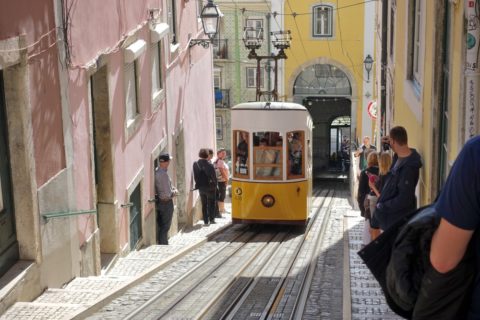 I wanted to take a retro cable car, but there was a long line on that street, so I decided not to take it this time and walked up in accordance with the cable car service! 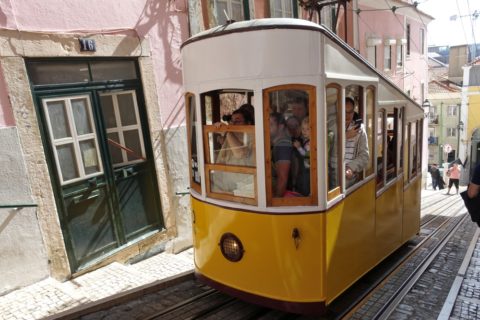 A cable car that goes up a hill at a slow pace, just like walking. It moves quietly without a horn, so it is very dangerous to stay on the tracks without noticing! 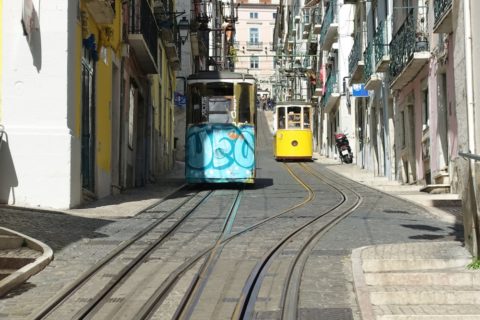 The railroad tracks are arranged so that the two rails overlap each other, but there is a double track in the middle of the slope, and the inbound and outbound lines differ here.

Contrary to the yellow car on the up line, the graffiti of the oncoming car is amazing …! The view is a little ruined. 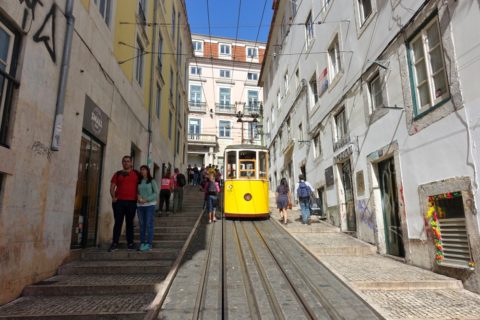 We will reach the summit in 3 minutes from the start! It is only 240 meters away, so it is no different from walking, or if you go down, it is much faster to walk. Well, this is definitely a tourist attraction rather than a public transportation. 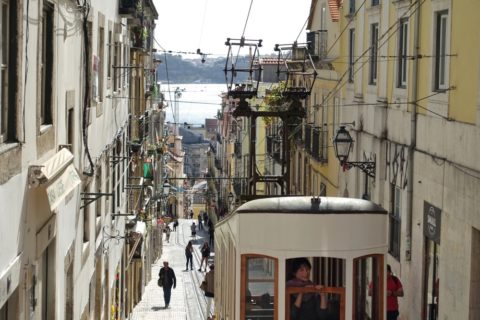 However, you can see the river through the cable car from the top of the mountain, and this is a good emotional view! There were many tourists who came to take pictures only of this scenery. 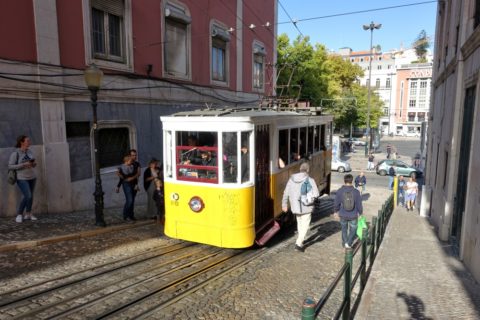 In addition to the Bica line, the Gloria line is also popular with tourists. It’s about 260 meters from Liberdade Avenue to the side of San Roque Church, the steepest of the 3 cable cars. 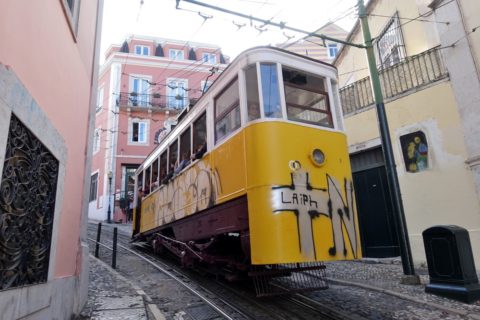 Unlike the Bica line, the cars are flat from front to back. Therefore, there is a large skirt on the facade on the valley side and it has a very distorted shape. 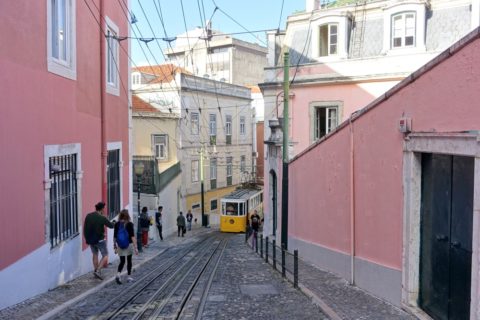 You can’t see the river on this Gloria line, but there are curves in the narrow alley and the view is not bad. However, the building is close, so if the sun doesn’t come in high, all the view will be dark. 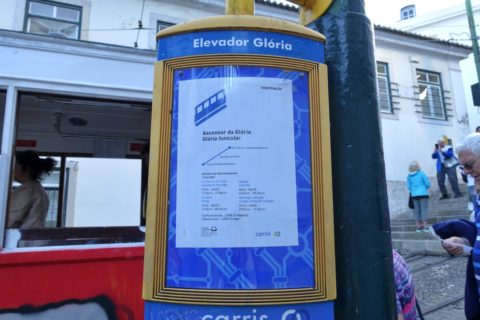 The Gloria line costs €3.8. Although it is possible to take a round trip, this is completely the tourist price! Like the Bica line, Viva Viagem is the best way to get on.

Cable cars that have become “ornamental” 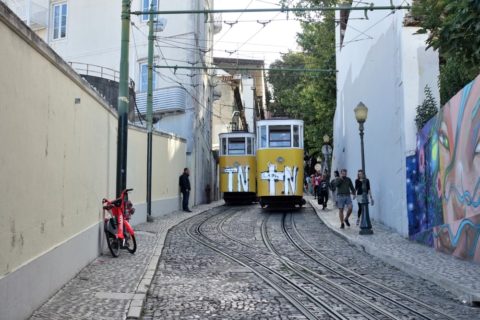 So, this time I went to see 2 of Lisbon’s cable cars which are popular among tourists, but they are crowded and the frequency of service is low and the fare is expensive!

It’s not completely usable as a means of transportation, and even if you get on it, it will be too crowded and there will be no emotion or shitty, so this is completely “ornamental” as seen from the outside! I recommend visiting on a sunny day to take good pictures!

"Pastel de nata" is a familiar sweet from Portugal. In the...

"Fado" is one of the ethnic music of Portugal. Accompanied...

After arriving in Lisbon, I went to a restaurant called "C...

When we returned to Lisbon from Sintra, we were looking fo...

The Empire Lisbon Hotel where I stayed in Lisbon, Portugal...