The performance will be a regular concert by the Vienna Philharmonic Orchestra, the same as the New Year concert, conducted by D. Barenboim and soloist M. Algerich. I could spend such a luxurious time appreciating this in a golden hall!

This time, we will take a close look at the seats and the view of the beautiful golden hall, as well as the contents of the performance collaborated by the two great masters.

Wiener Musikvein, home of the Vienna Philharmonic Orchestra. Needless to say, it is the world’s highest concert hall.

That place is very close to the Vienna State Opera. Beyond the link is a street with the name “Bösendorfer” which is familiar even to famous piano makers. 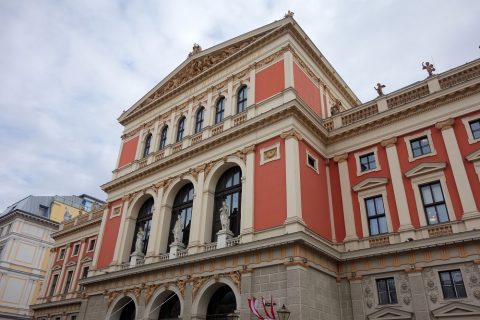 It was completed in 1870. But the exterior walls are clean, I wonder if they have been renovated and repainted. There is a large hall called the Golden Hall (Großer Saal) as well as a small hall (Brahms Saal), multi-purpose hall, conference room, rehearsal room, etc., making it a little complex. 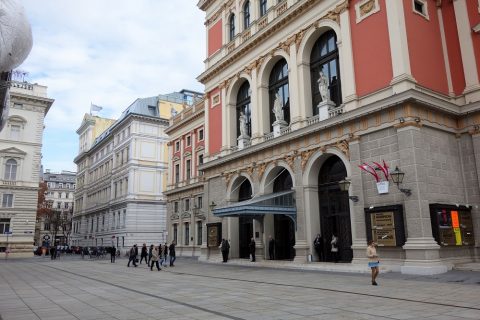 This performance is a matinee. The concert starts at 11 o’clock, the same time as the New Year concert, and the hall opens 30 minutes before, but I was able to enter the building when I arrived about 45 minutes before. 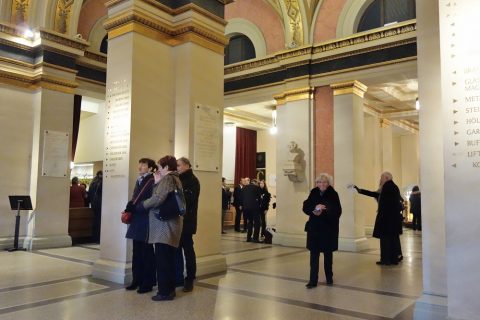 Go inside and you’ll find the entrance hall. The columns have arrows pointing to each hole. This is a surprisingly bleak space, but there are portraits of historical figures on the walls and gilded decorations on the ceilings. 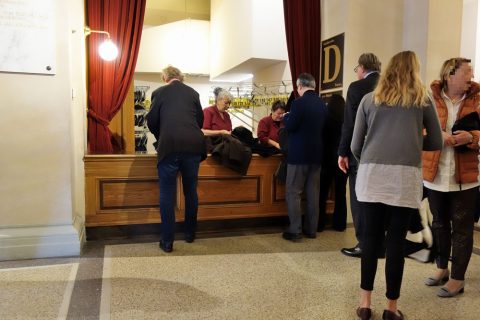 There is a cloakroom on this floor, and you need to leave your coats and large bags here. I paid €0.85 and €1 coins for each package and they gave me the correct change. Even though it’s paid, it’s a bit more reasonable than the National Opera for €2. 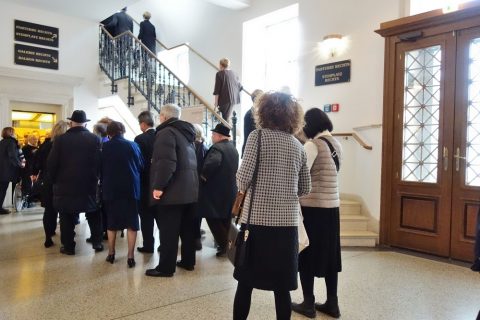 A little after 10: 30, the buzzer sounded and the hall finally opened! Unlike the Paris Opera, there are no metal detectors or security gates, so you can check your ticket at the stairs and go up to the second floor.

The seats of “Großer Saal” are beautiful! 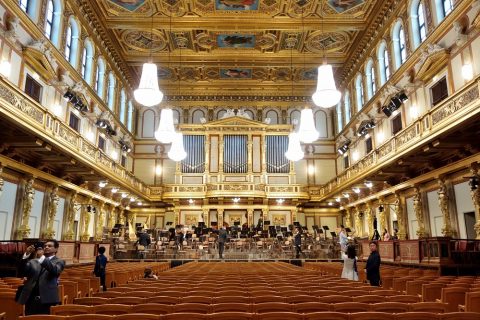 Here we are, Grocerzar! This is a golden hall with gold leaf everywhere, from the ceiling and walls to the edge of the second floor.

It is characterized by female-shaped pillars called (caryatid) lined up along the wall. The pipe organ, designed to look like a Greek temple, is also beautiful, but it doesn’t stand out when surrounded by gold. 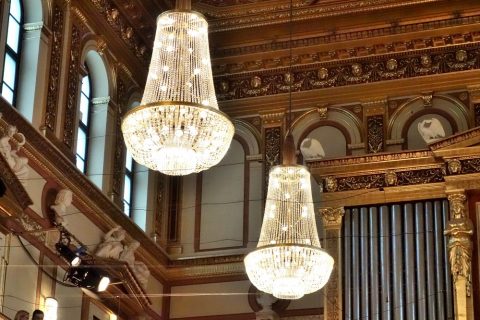 The chandelier shape is also characteristic. This chandelier, the same shape was used in the set of <<Ariadne on Naxos (National Opera)>> I told you the other day, so it might be related to something traditional in Vienna.

When I take a picture normally, this chandelier loses its white color, so it’s hard to take a good picture …。 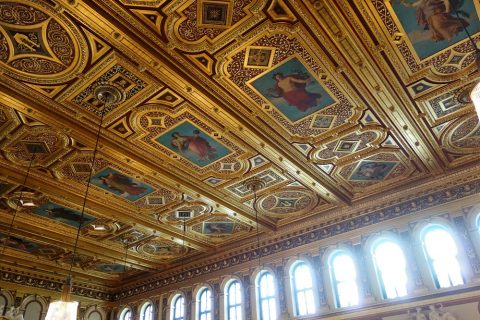 The fresco on the ceiling is the work of the 19 century painter August Eisenmenger. If you look closely, you can see that the lighting equipment is installed on the edge between the paintings so that it doesn’t stand out. 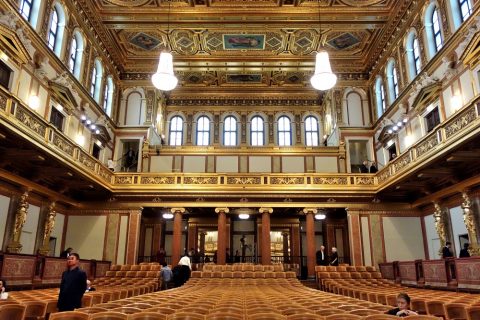 The back of the auditorium looks like this. There are almost no steps until just before the last row, so it may be difficult to see the stage from the seats in the back. Behind the pillar at the back of the seat is a standing room. 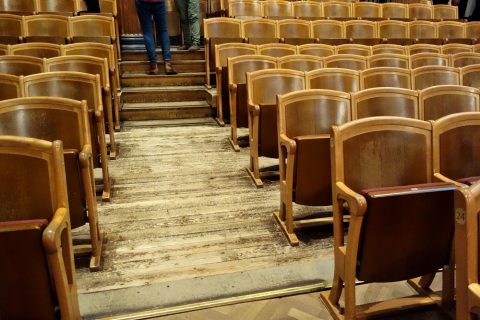 The floor of the auditorium is wooden. Only for a few rows of seats in the back of the train, it might not have been repaired, but the specifications were outdated.

View from the second floor seats 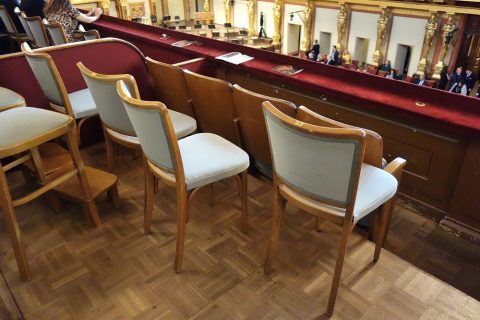 Next, I went to the balcony seats on the second floor. This place has 3 rows, but only the front row has fixed chairs. The second and third rows are designed to move like ordinary dining chairs, especially the third row is a long-legged high chair with footrests. 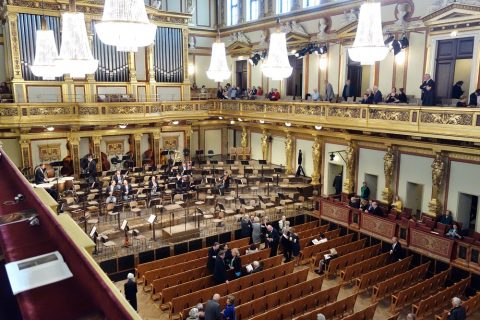 The view from here is here! You can look around until the stage is placed, but it’s hard to see except for the first row unless you step out. There’s also a bright chandelier right in front of you, so it might feel a little annoying. 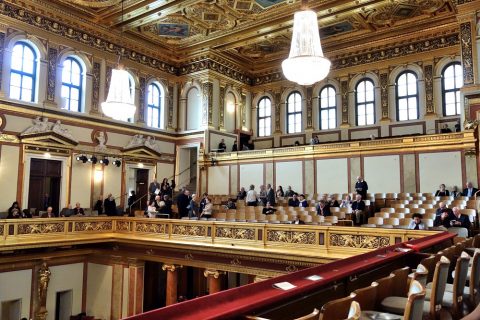 The center seat on the second floor. Only the front row is VIP specification, but the color of the seat is different. This hall is called “shoebox type” and is shaped like an elongated rectangular parallelepiped, so the distance from the center seat on the 2nd floor to the stage is quite long, so it may not be suitable if you want to see the artist closely. 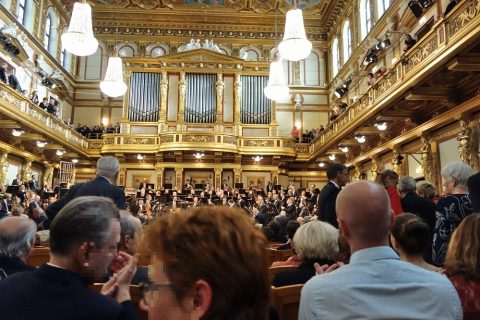 My seat this time is in the 1st category of the flat dirt floor. It’s near the center and slightly toward the back. It was supposed to be a sold-out performance, but fortunately there was an empty seat diagonally in front of me, and moreover there was also a small aunt sitting in front of me, so the view was perfect! 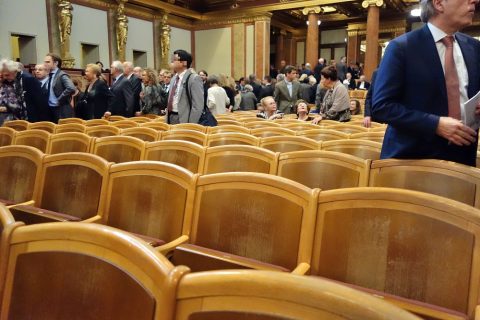 However, as mentioned above, there is little difference in height between the front and back rows, and there is no difference between the left and right rows, so if a big gentleman sits in front of you, you will hardly be able to see the stage. 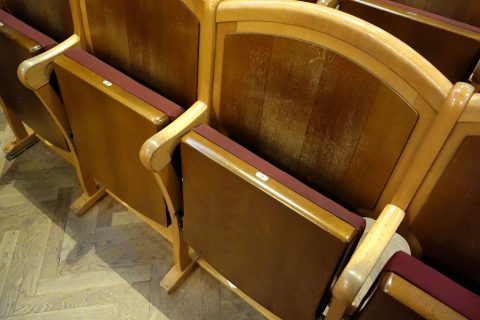 The seat is not comfortable. It has a cushion just in case, but my butt hurts when I sit for a long time. I think I’m not the only one because I saw people repeatedly reseating here and there during the performance.

Also, there are seats next to each other in 1 row, so if someone in the same row moves his waist, 1 row will move at once. …。 This area may be very old.

A gorgeous collaboration between Barenboim and Algerich!

Now, this performance is a regular concert of the Vienna Philharmonic Orchestra. It’s not quite like New Year’s Concert, but it’s hard to get regular tickets (I’ll tell you about getting tickets in the next article.). 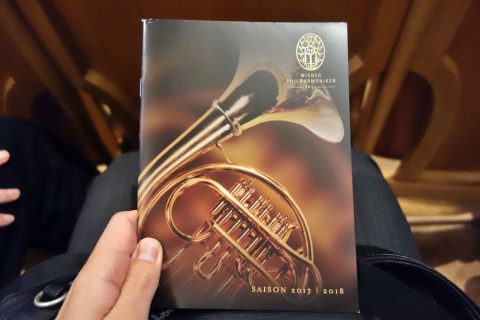 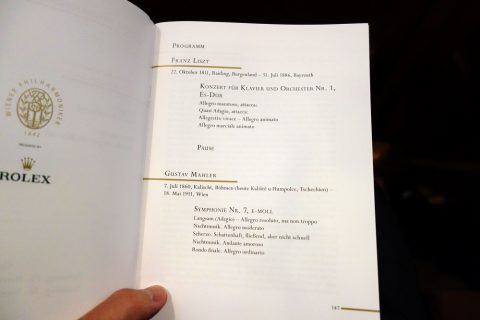 The program features Argelich’s soloist, Liszt’s Piano Concerto in the first half, and Mahler’s Symphony No. 7 in the second half. Usually in this kind of program composition, the overture of the orchestra is played before the concerto, but there is no overture on this day. 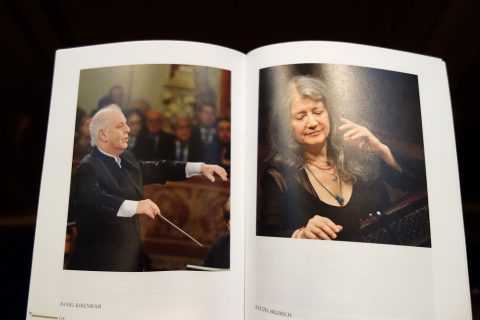 Maria Martha Argerich, a female pianist from Argentina, is a household name in the world of pianos, but her brilliant mechanic, who doesn’t even remotely reflect on her age of 76, is simply amazing! I hardly move my body and I wonder where such powerful sound comes from! 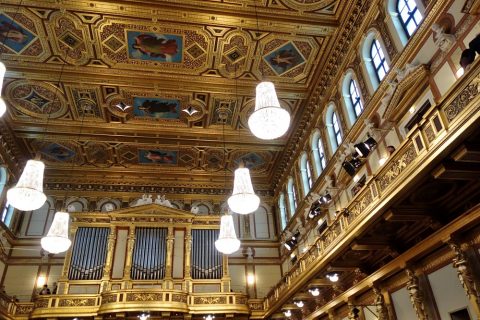 But surprisingly, the sound of the piano doesn’t come to this floor. Maybe it’s because of the characteristics of the hall, but it feels like it’s coming out to the ceiling or in a different direction. For better or worse, her sound is like transparent glass, with little of the color of stained glass. 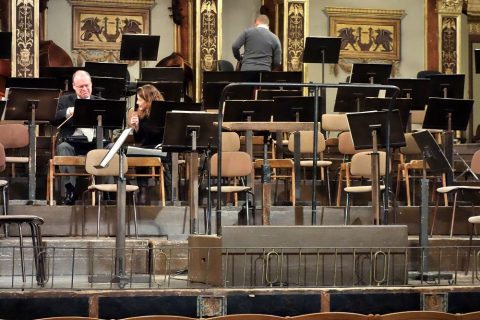 You left too early after the performance! 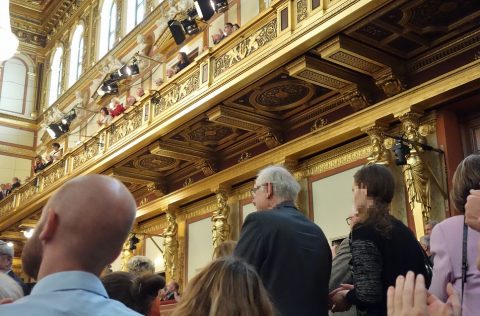 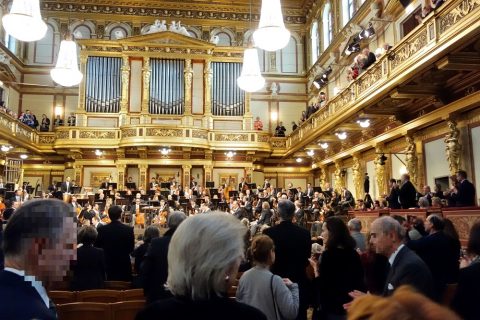 There’s no encore after the symphony, and I think everyone knows it. Only serious Japanese people clap until the end of the performance?

You’re so busy! a crowded foyer 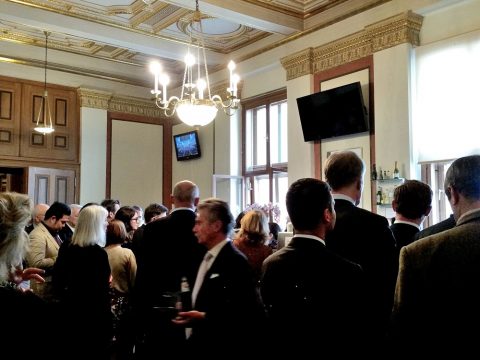 Finally, let’s look at the foyer during the break. Unlike the National Opera, the venue is not specialized for social occasions, so the space is very limited and the foyer is chaotic! Even so, it’s amazing how Westerners can talk with a glass of wine in one hand even though they’re packed in this crowd. 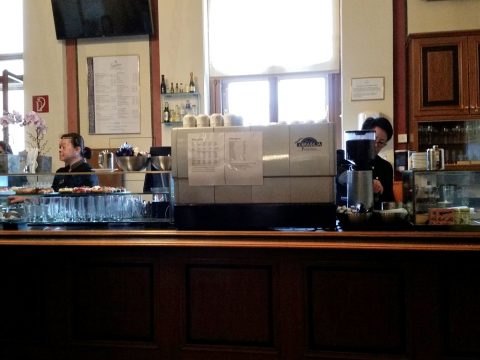 As for the drinks, the champagne is the same as at the National Opera “Laurent Perrier”. The price was relatively reasonable: 3 units of red and white wine and 2 units of coffee. 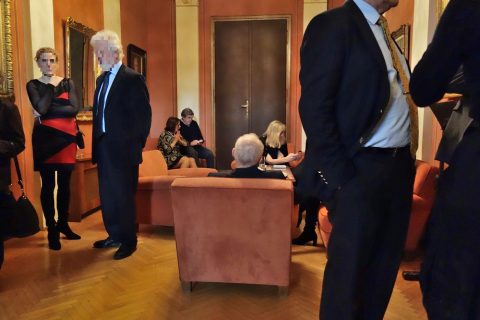 In addition to the bar area, there are rooms with a slightly special taste on the side of the seats. 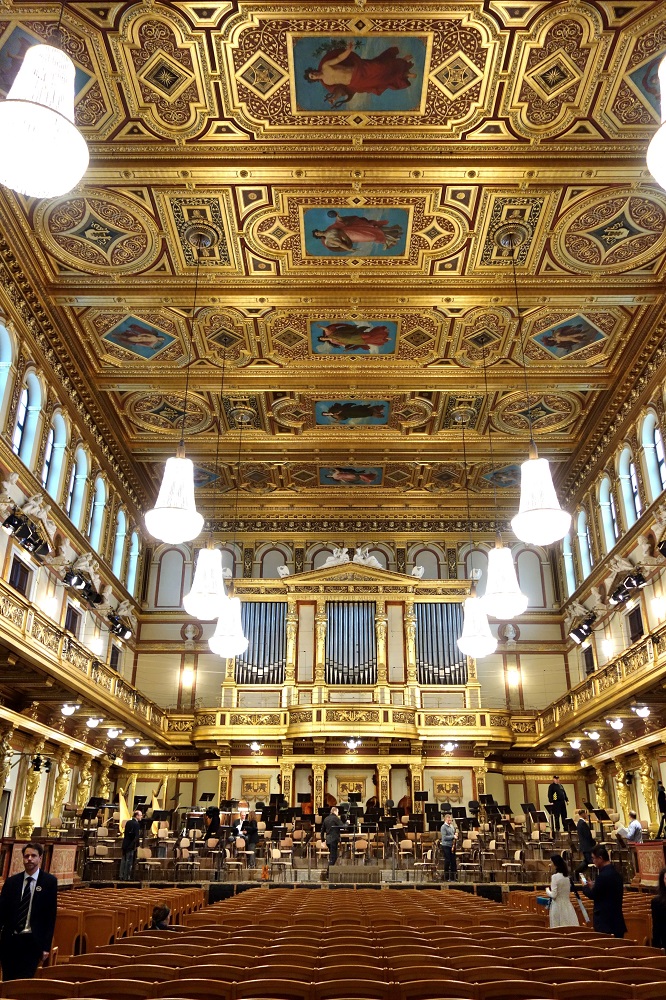 Wiener Musikverein’s Großer Saal, a golden hall. In today’s New Year’s concert on January 1, more flowers will be decorated in this gorgeous hall, making it even more gorgeous.