City Hall Station is located in the heart of the city of Singapore, yet has a lot of greenery. There are some western churches around here, so I decided to take a look around.

The first place I visited was “St. Andrews Church”. It is the most famous church in Singapore, and I was in the middle of Sunday service since I visited on Sunday morning. I was not able to go inside, but I was able to get a glimpse of the inside with lighting and the scenery that I cannot usually see.

St. Andrews’ Cathedral is a 10 minute walk from Merlyon Park, but you can reach it from any location by MRT from City Hall Station. 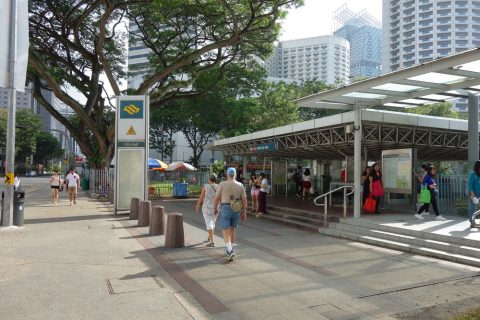 There are several exits, but the exit on the North Bridge Rd side on the west side (exit C) is convenient. 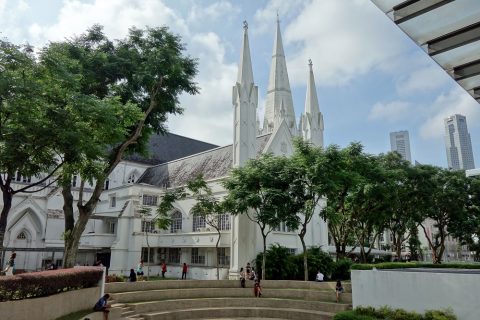 As soon as you get out of the station and turn around, you will see a white castle. This area seems to be a place of relaxation for citizens. Admission to the church is free, so you can enter the site without permission. 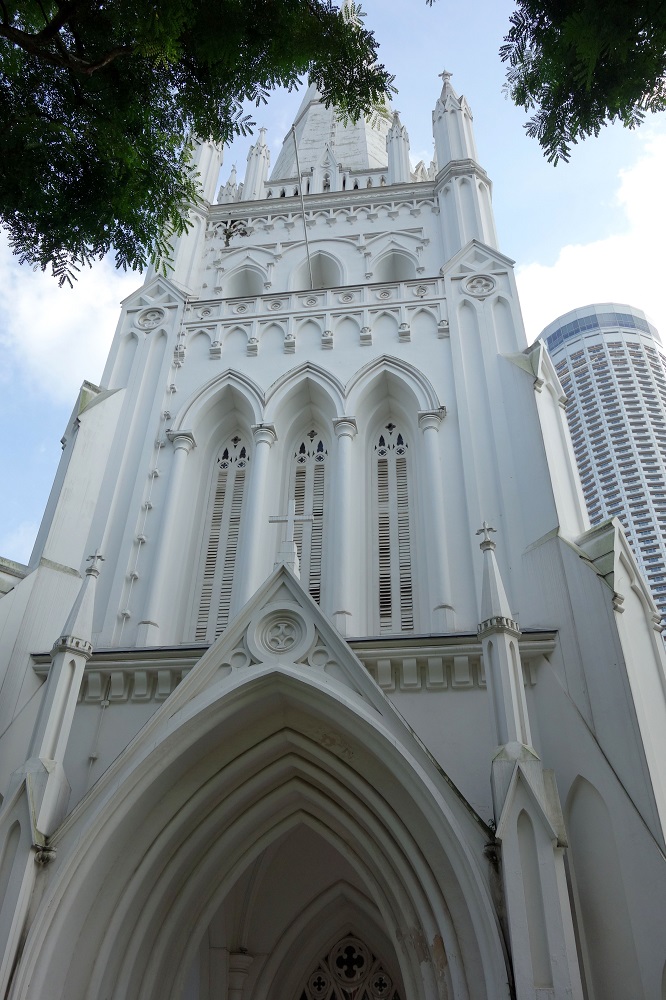 The exterior walls are white! There is no contrast, so the fine decorations don’t stand out, but the pure white color standing in the city stands out. It was completed in 1863, but it doesn’t look so old.

In the middle of “Sunday service” 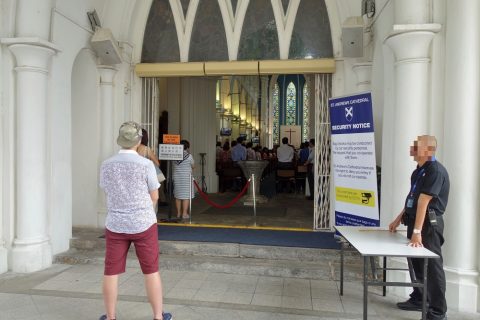 This day is Sunday. I think it was around 10 AM, but it was in the middle of Sunday service. You will hear a song (D minor) accompanied by a pipe organ.

At first, I took a picture from a distance, but the person in charge guided me to the front of the entrance saying, “Come closer and take a picture.”. 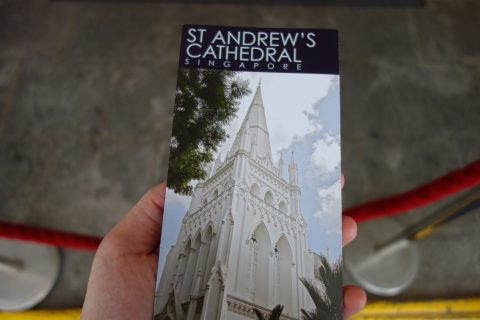 They also gave me brochures. I received an English version at that time, but when I went inside later, I found that a Japanese version is also available. 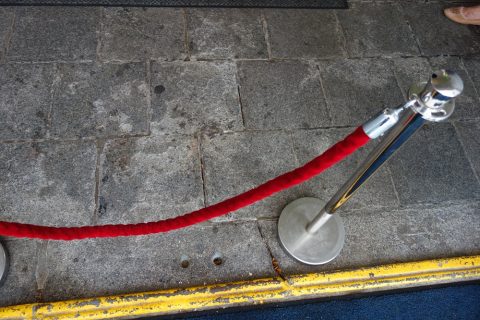 There was a rope at the entrance, but followers were also encouraged to go to the side entrance of the building without entering from here, so it doesn’t seem to be a stop for tourists. At that time, worship had already started, so I think it was a consideration not to disturb the progress. 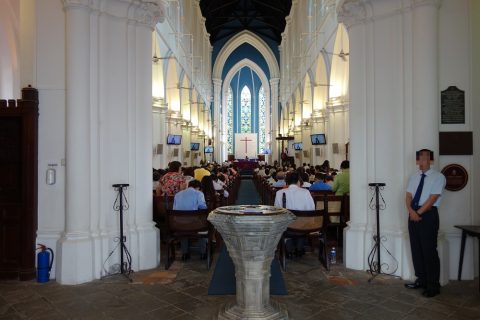 Of course, you can’t go inside because it’s during a church service, but you can hear the music of the organ and the story of the pastor even just around the entrance. You can feel like attending a service like “standing room” in a concert hall. 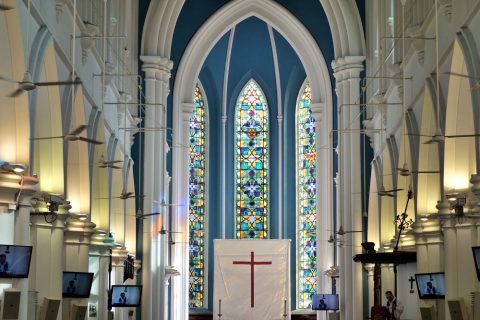 You can also see the inside of the church from here. There are 3 stained glasses in the front, and the voluptuous light of indirect lighting on both sides. 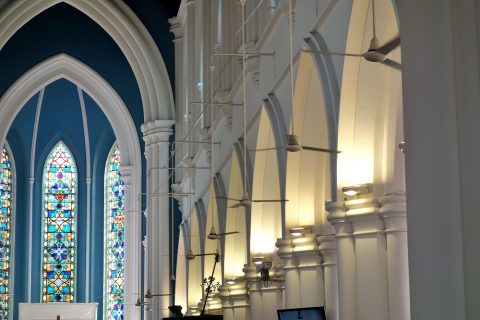 The ceiling fan hanging from the ceiling shows that it is a church of the country of perpetual summer. This is something you don’t see in western churches. 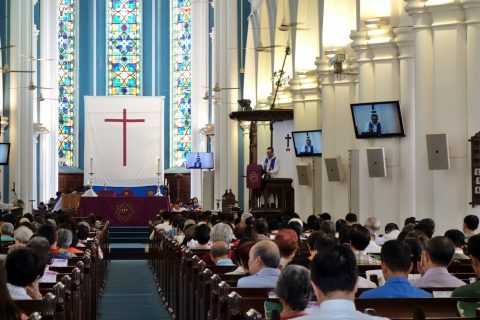 There are many monitors and speakers so that we can hear the pastor’s voice and expression from the back seat. Other than that, if you look closely, there are believers sitting on the main altar side, but people who come in late seem to be guided to this seat.

stained glass above the entrance 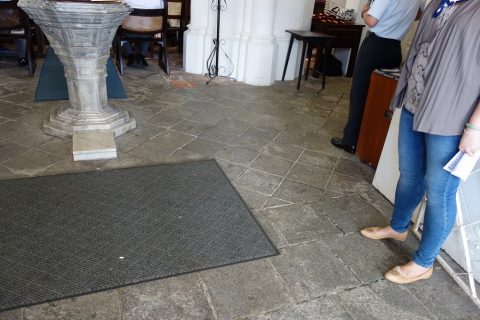 When I was taking pictures, the person in charge beside me said, “There are stained glass above, so you can take a picture.” and let me inside the rope. Of course, taking photos without a flash is strictly required, but they showed me around with a very friendly feeling, thank you! 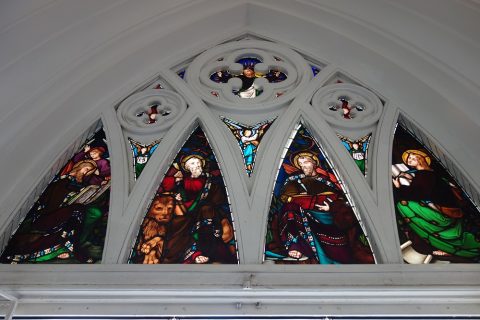 Four saints were drawn at the top of the entrance. According to the pamphlet, it depicts “Four Gospel Writers” each of which depicts Matay Marco Luca John. 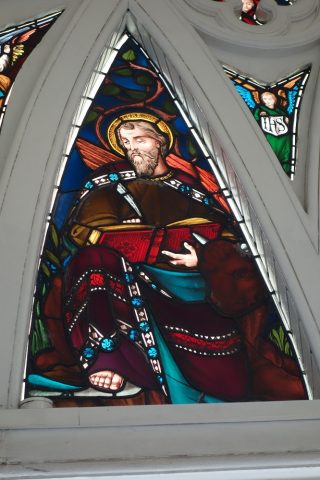 You can see the detailed construction up close. The stained glass looked beautiful because it was sunny on this day, but this main gate faces the west side, so I think it will look even more beautiful in the evening. 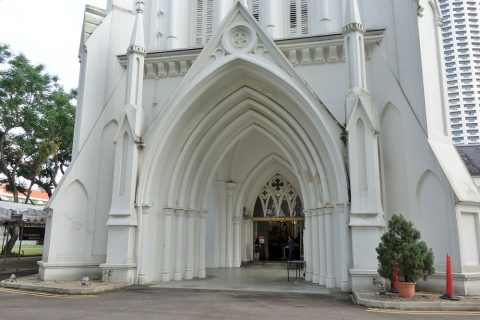 So I left the church today, thanking the kind guide. I was able to get a glimpse of the presence of Sunday services and the beautiful interior, but I would like to go inside. I visited St. Andrews Church later, and I will tell you about it next time.

This time, I will report the stay report of "Park Hotel Al...