Finally, the final of the International Tchaikovsky Competition 2019 has begun! In this issue, I would like to report on the 1st report of the piano division held yesterday (25th) and the Moscow Conservatory where the concert will be held.

site of the Moscow Tchaikovsky Conservatory

The International Tchaikovsky Competition is now being held in Moscow and St. Petersburg. The piano section will be held at “Moscow Tchaikovsky Conservatory” in Moscow. There are some divisions that have different venues for the qualifiers and the final, but the piano division is held here from the qualifiers to the final. The Moscow Tchaikovsky Conservatory is one of the best in the world. In the past, Tchaikovsky himself worked as a professor.

The main hall has an entrance in the square where the statue of Tchaikovsky stands. When you go inside, there is an entrance to the large hall after passing through several doors. There is a ticket office here, but of course the tickets for this piano division final have already sold out.

I managed to get it on the internet right after the release, but there are many people who couldn’t get it. After the security check and the ticket check, there is a wide foyer. This foyer has 3 levels. The first floor has a cloakroom and a toilet, and the second and third floors have entrances to the seats. At the foyer on the first floor, the history of past competitions is introduced through panels. The 1st festival was held in 1958, so it’s more than half a century. The approach from the first floor to the second floor is two large stairs with a green carpet that looks dignified. It has a different luxury from a red carpet. There is a cafe in the middle of the stairs and it is also a place to socialize during a break. It is a cafe like a restaurant with table seats, but all orders are self-service at the counter.

The menu is only written in Russian, but there are soft drinks, alcohol, light meals, coffee, cakes, etc. The price is from 180 rubles for coffee and around 100 rubles for sandwiches. Very reasonable pricing!

The second floor is a museum foyer. The foyer on the second floor features an interior featuring pink walls and arched beams. The floor is covered with a green carpet. There are a lot of paintings and stained glass on display on this floor, just like a museum! During the break, there were some visitors who enjoyed art appreciation. In addition, many records of past performances at the Moscow Tchaikovsky Conservatory are exhibited. The program costs 300 rubles. You can buy it from the staff in the foyer, but depending on the day, it might be out of stock and not available. Each section has a different booklet, and the piano section is blue. The red booklet is the introduction book of the judges. And the seats are here. It doesn’t look like a lot of space, but it has a decent 1800 capacity. 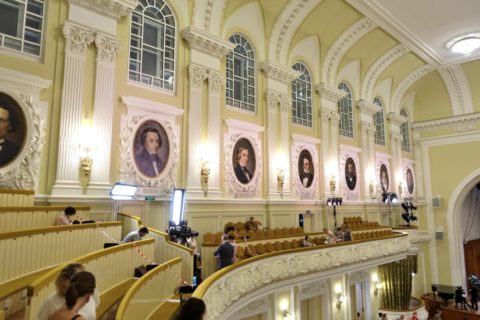 On the upper wall, there are many portraits of famous composers from around the world! However, all of them were drawn with a fantastic touch of girls’ manga, so I felt something a little like utopia …。 The specifications of the seats differ between the first floor and the second floor, and the first floor seats are relatively new wooden chairs. The seat width is as narrow as 45 cm, but the front and back seat pitch is wide, so it is good that you can easily enter the center seat! The space between the fifth and sixth rows of the first floor seats is a little wider, and a table is placed here and used as a seat for judges. On the other hand, the second floor seats are built like long chairs except for the balcony on both sides, but this is quite a nuisance!

This time, I have watched from the qualifying round to the final in various seats on the 1st and 2nd floors, but this 2nd floor seat is hard to sit because of its rigid back and hard seat surface, and my buttocks start to hurt after sitting for 30 minutes.

The space between the seats is narrow, and I have a slight doubt as to why I made such a seat …。 Well, the piano section final subject is two piano concertos by one person. One song is designated by Tchaikovsky Pf Concerto, and the other is the Concerto by the performer’s choice.

They perform 2 piano concertos in a row, which takes about 40 minutes on average. Last night (25th), the 1st day was played by 2 local Russians (Konstantin Yemelyanov, Dmitry Shishkin) and Tianxu An from China, but as far as I heard from these 3 people, Shishkin completely won!

With outstanding stability and sound control, his forte, Proco # 3, was a truly impeccable and perfect performance! I’m sure he won the prize, but hopefully more artistic performances than his will come out in the future.

Fujita Mao is the last day. Japan’s Mao Fujita will appear on the final day (27th) at 18 o’clock (24 o’clock Japan time). It will be broadcast live on the official website, so please watch it if you want to watch it!