Jumeirah Mosque is the largest and most beautiful mosque in Dubai. When I visited at midnight, I happened to be able to see the sight of Muslim people gathering around while Adhan was ringing!

It might be good to enjoy a little strange world that you can’t see in Japan.

As for the access to Jumeirah Mosque, this is a little inconvenient … is located on the coast a little far from Dubai Metro, so you have to take a bus or taxi to get there. 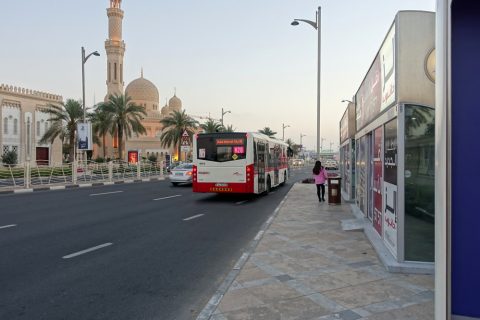 This time, we took the X 28 bus from Al Jaliya Station on the Dobby Metro Red Line, and although there was a slight traffic jam in the evening, we still arrived in about 20 minutes. Get off at Jumeira, Grand Masijd and you’ll be right in front of Jumeirah Mosque.

The most beautiful appearance in Dubai 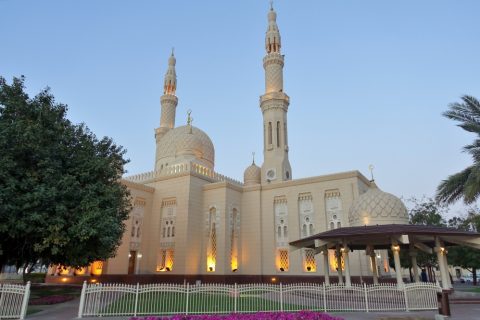 Completed in 1979, Jumeirah Mosque features cream-colored exterior walls and slender minarets. This time, I visited at midnight, which is said to have the most beautiful appearance! 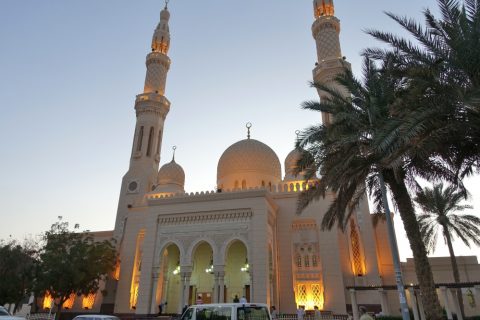 The Jumeirah Mosque, considered the largest mosque in Dubai, is not as big as it looks and is only a fraction of the size of the Sheikh Zayed mosque in Abu Dhabi (Reference → Free admission! The illumination of “Sheikh Zayed Mosque” is beautiful!).

But the form is beautiful, and the fine decoration of the minaret is a very refined design. 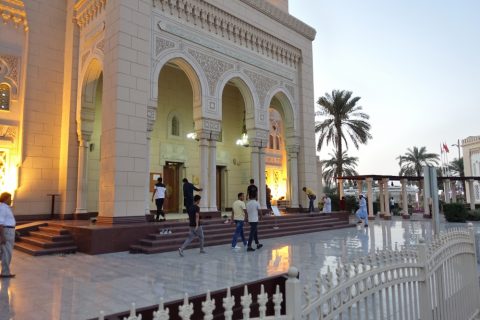 Around the building is a courtyard filled with fine tiles. If you go further towards the front of the mosque, it will be shiny like a mirror! Inside the mosque is barefoot, but the courtyard is allowed to walk with shoes on. 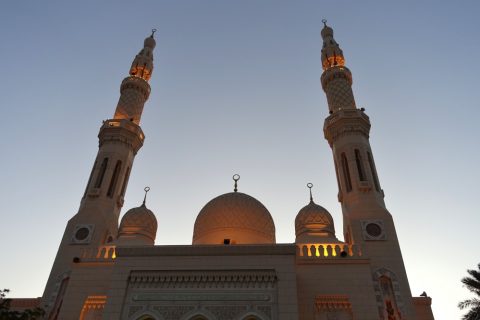 When I arrived at the mosque around 18:25, it was probably just around the time of the evening prayer that the dubious “Adhan” began to ring from the mosque’s speakers, echoing loudly. 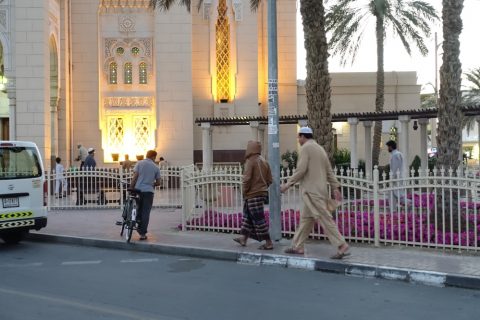 Soon, Muslims will gather from the surrounding area. In particular, there are not only people dressed in white, but also many people in plain clothes, but only men come. I didn’t see any women. 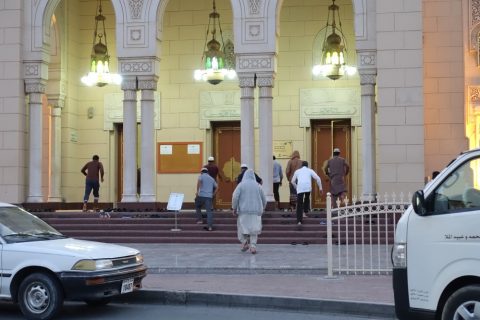 Towards the end, some people hurried toward us.

By the way, when I was playing with my smartphone on the road in front of the mosque, a man called to me and told me to go away with a pointing gesture. Apparently pagans are not even allowed to access the mosque during church services …

Visiting the inside of the mosque is a tour only.

Jumeirah Mosque is also open to tourists, so you can take a tour inside.

According to the website, the inside tour is held every day except Friday, 2 times a day (10: 00, 14: 00), and each tour is held 30 minutes before the departure time, so you don’t need to make a reservation in advance. They also rent out Hijab for women, but it is a place where you should pay attention to your clothes beforehand. 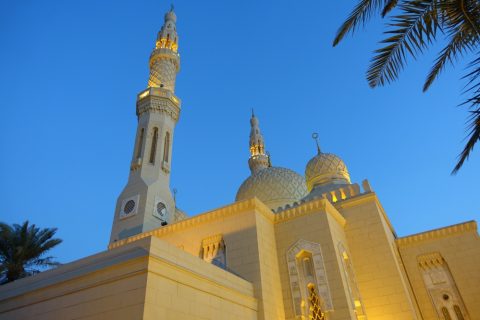 I could enter a mosque in Singapore without any problem, but it doesn’t happen in a serious Islamic country like the UAE.

This time I only looked at it from the outside, but the lighting of the sunset was fantastic and worth seeing! If you want to see the exterior, I recommend going from dusk to night!