The biggest highlight of this trip to London & Paris was the boarding of JAL first class using the award ticket after all! I would like to tell you frankly about the taste of the legendary champagne “Salon” that you can only drink here, the seats and the service.


It was JAL first class this time, but the mileage used for issuing the ticket was 102500 for a round trip (homeward business). Although first class has become more and more remote due to a series of bad mileage system, we managed to issue tickets before the bad mileage system was changed! 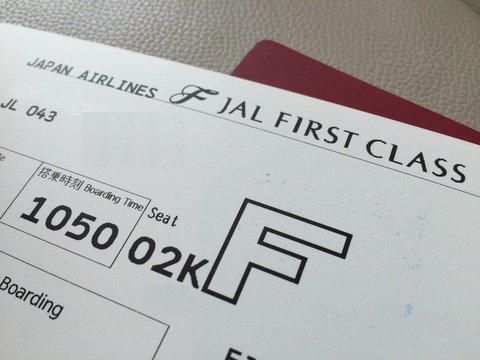 Tokyo started out as a “Haneda”. If possible, I wanted to use that independent VIP check-in at Narita Airport to board, but it can’t be helped because it’s the current of the times.

First class is not the only priority 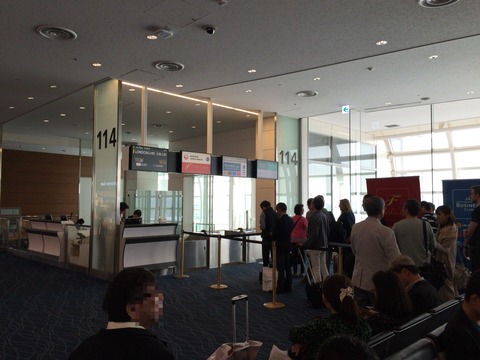 The train for London leaves at 11:20. I went to the boarding gate after 10:50 when boarding started, but it had not started yet. There were already about 10 people in the first class line, …, and I think there were only 8 first class seats, … 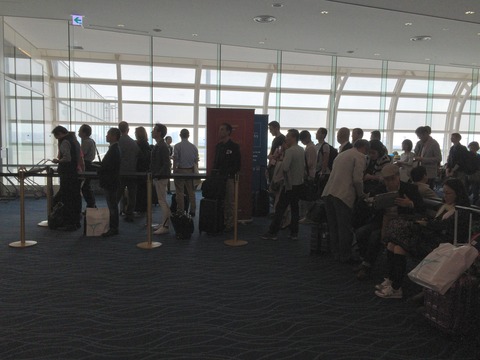 When I took a closer look, there was also a “emerald” status mark on the information board at the back of the line. According to preliminary research, first class passengers were given priority over diamonds in guidance, but apparently not. 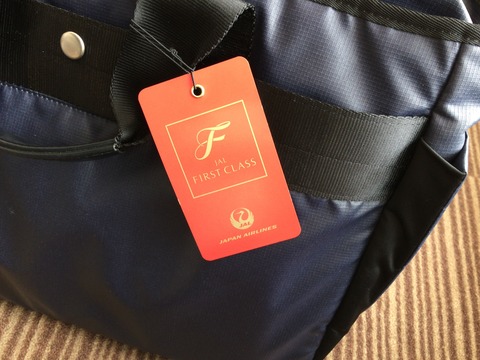 But it’s embarrassing to see people lining up with this on their bags, so I will line up after boarding starts. 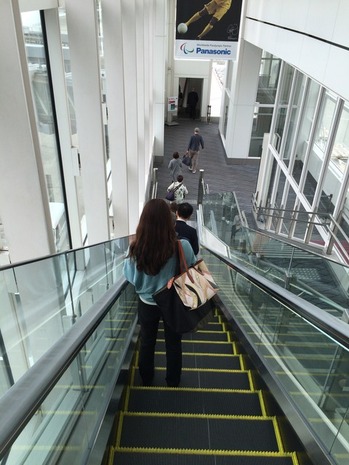 Here we go. This is what makes you excited. 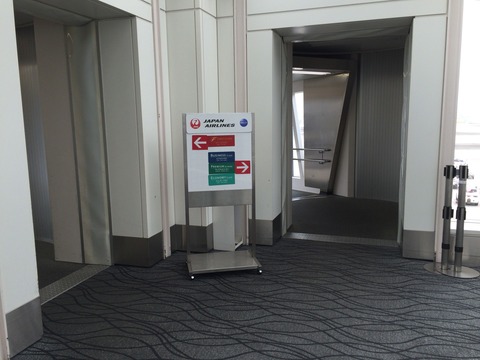 I had one of those pictures taken by many bloggers. Even so, each mark of Haneda Airport is small and looks cheap. I think the one with the size of the whole frame was put on at Narita Airport. … 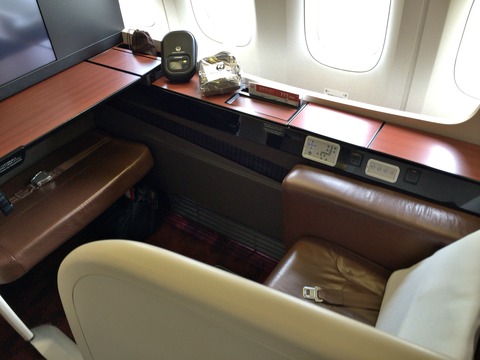 Window 2K seat. As for the daytime flight to Europe, I don’t need to be dazzled on the right side depending on the season. I have tried this JAL-Suite on “Narita → Itami” before, but when I look at it like this, I realize its size again (Reference → I tried JAL Suite on domestic flights [Narita → Itami] class J!). 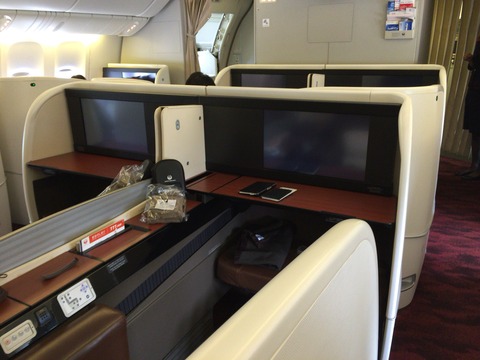 All eight first class seats are full today. It is a fully booked flight including business and economy. However, when it’s this wide, I don’t feel the presence of people, and I don’t feel it at all.

Welcome drink is the same brand as business class. 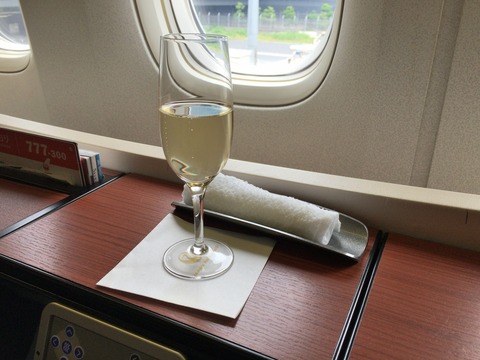 Welcome drink after CA’s greeting. As with business class, you can choose “Champagne” or “Orange juice” but the champagne served here is the same “Delamotte Brut Blancc de Blancs” that is offered in business class.

The champagne is a sister product to JAL’s business-class flagship, made from grapes from a year when it couldn’t be of “Salon” quality. It has a rich sweetness and is much more delicious than the “Laurent Perrier” I had in the lounge.

In addition to the London line, it is also available in business class on the American line, but for some reason this “Blanc de Blanc” was not provided only for flights to and from Narita Airport on the European line, but it was provided as a lower grade “Brut” as on the middle-distance line.

As I reported yesterday, there was a new champagne called “Charles Heidsieck” in the business class from Paris to Narita, so it can be said that it has improved a little, but I still feel that the taste is not as good as this “Blanc de Blanc”, let alone the market price. 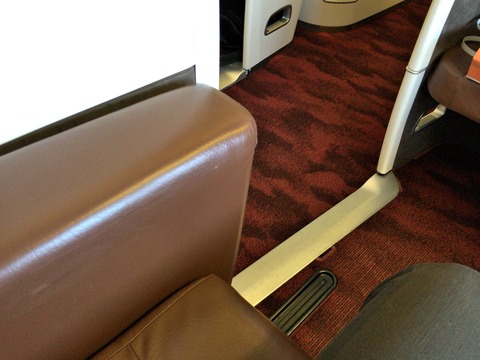 Well, to tell you how it feels to sit on a seat, the leather cushion feels so comfortable that it feels like you’re sitting on a throne. The seat width is wide, so even if I am a man, there is space like this.

However, I could not deny the feeling that the seat was too wide and uncomfortable, and actually by the time I sat in this seat and finished eating, I felt a slight pain in my back and stiff shoulders. It might be a problem that the armrest is too empty. 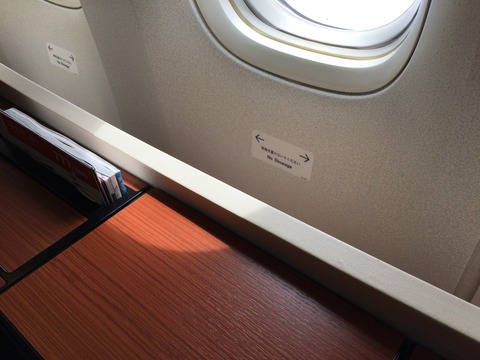 On the other hand, there is a space by the window for things over 10 centimeters wide, so you don’t have to worry about where to put your cell phone, but … 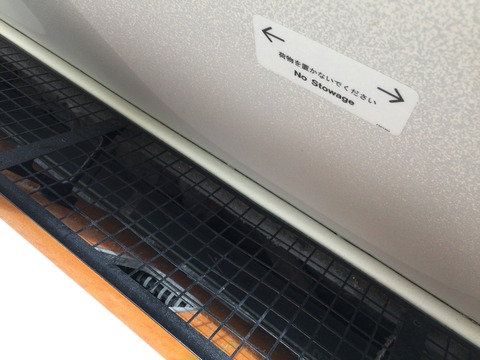 There is a ventilating groove between it and the window, which leads far down (Under the seat unit). During the flight, I repeatedly wondered if mobile phones and music players placed next to my seat might fall into this groove due to the shaking of the flight.

There is a black net, but you should be careful not to drop women’s accessories into this “crevasse”. 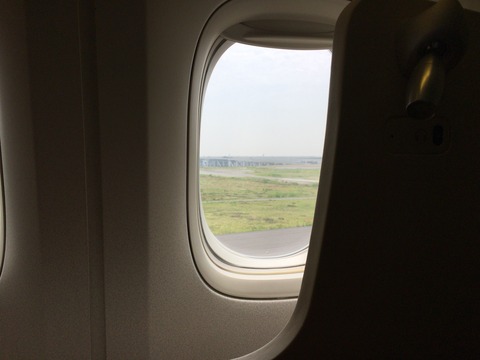 Also, it’s not as far as ANA first class, but the window is a little far. It’s a luxury concern, but everyone wants to see the expression of the sky changing every moment at the best position. Business class Sky-Suite wins. 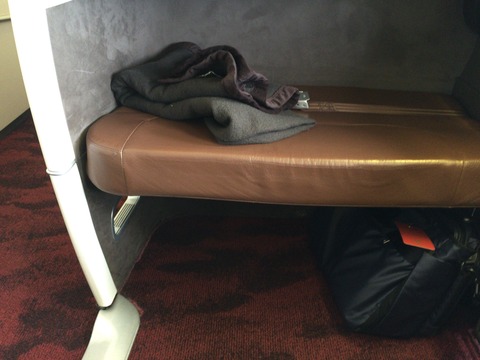 Another inconvenience is that you can’t pull the ottoman to the seat. If you want a footrest, you have to move your chair forward so that it can slip out of the seat unit partition and peek into the aisle or the next seat. 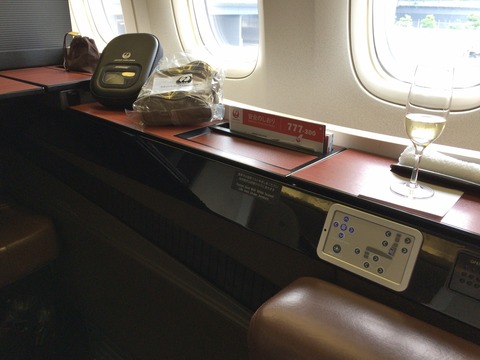 I feel like it’s a shame that I haven’t been able to make effective use of 100% of the space I have. In these points, I would like to look forward to the next first class seat.

Next time, I will deliver a report on in-flight meals, including champagne “Salon”.