This time, it is a review at “Hanoi Vietnam Tuong Theater” in Hanoi, Vietnam! I was supposed to watch the performance at the Opera House, but as I wrote yesterday, the venue was suddenly changed …。

However, the contents of the performance are impressive with its high artistic quality and splendid performance! The interior of the venue was wonderful and I could feel the tradition of Vietnam, and I was very satisfied with the view.

The Vietnam Tuong Theater in Hanoi, Vietnam, is located in the deep old Hanoi area. It is located about 400 meters west of Lake Juan Kiem.

It is more than 1 km away from the Opera House we introduced yesterday, and a little less than 2 km away on the road. It is not facing a wide road like the Opera House, and it is located in a chaotic place where motorbikes go, so the atmosphere is completely different. 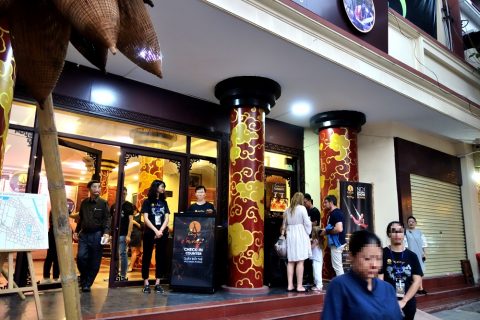 There’s a ticket office at the entrance where you can redeem an e-ticket you bought on the Lune Produciton for a voucher. But when I flashed the e-ticket, the staff around me came up to me and everything went smoothly from the exchange to the tearing. 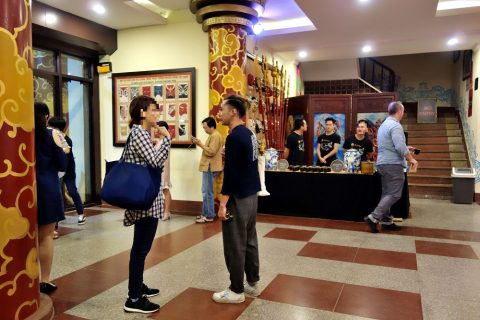 The lobby is inside. But it’s not a big foyer like in a big concert hall, it’s just an entrance hall. At that time, it was already 30 minutes before the curtain time, but we could not enter the audience seats yet, and early visitors were waiting for the opening. 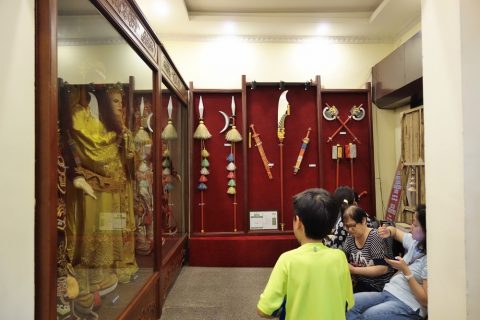 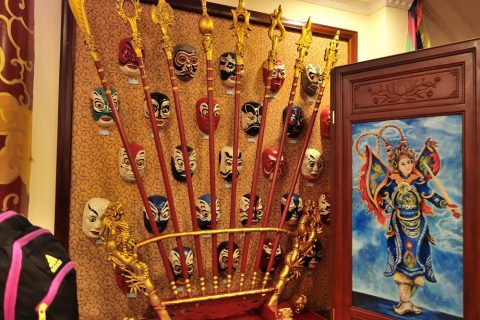 Like the Opera House, it has a 100 year history. The Tuong Theater is said to play an important role as the birthplace of Vietnamese performing arts. There are some ethnic goods on display in the foyer. 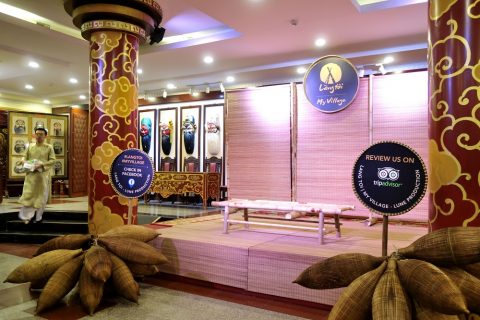 There was a special stage in the center of the lobby. There will be a performance with cast after the performance, and that will be later. 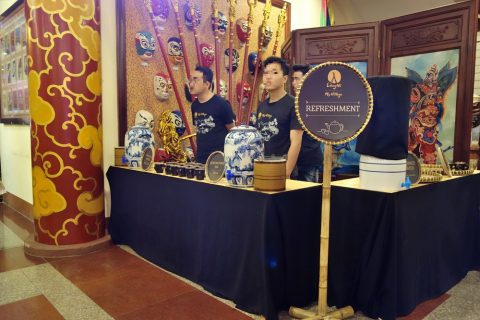 In one corner of the lobby, there was a section that said something like “REFRESHMENT”. When I asked the staff, they told me that this is a welcome drink, so please take a cup and help yourself. 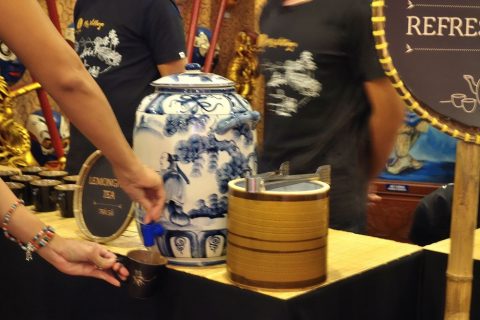 Turn on the faucet of a stylish ceramic pot and pour it into the cup by yourself. There are 2 kinds of drinks, one is lemon tea and the other is “Corn Silk” which is made from corn whiskers.

I had never heard of “corn silk” but when I checked it, I found out that it is a drink that prevents swelling and suppresses the rise of blood sugar level, and it is sometimes used as a herb in Korea and China. It was a topic of conversation in Japan for a while, but I didn’t know …。 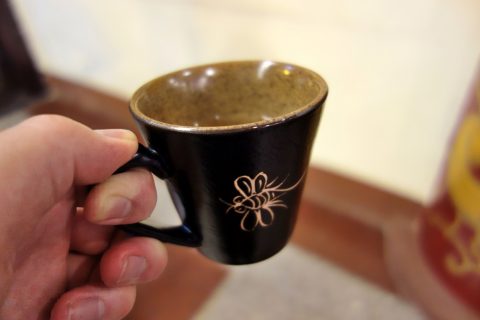 I had lemon tea this time, and it was quite delicious! You can enjoy the deep bitterness, bitterness and sourness of black tea while it is sweet. The cup was quite stylish, and I could feel good hospitality! 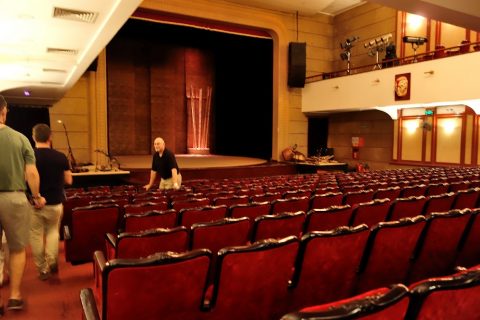 The audience finally opened 25 minutes before the show started. The seating area is about the size of a small hall, and the Hiradoma on the 1st floor seats 292 seats. There are seats on the second floor, but you can’t choose when you buy a ticket. 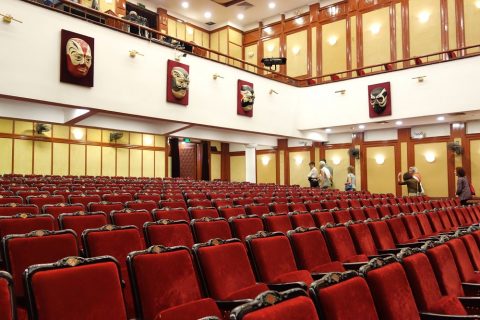 Before the performance, the lighting was not turned on so much and it was dark, so I took a picture after the performance, but the interior design was similar to Japanese traditional performing arts. There were lighting fixtures on the second floor, so I think it’s not open to customers. 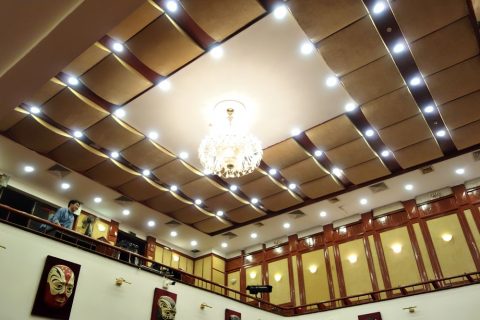 There is a light like a chandelier on the ceiling, and it is very nice! The atmosphere is like a blend of Japanese and Western styles, which is the characteristic of Vietnam. 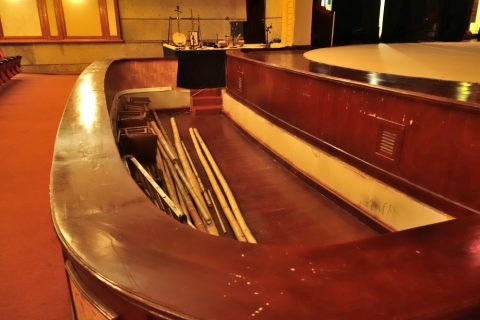 It is small but has an orchestra pit. It was not used in this performance, so it was used as a storage place for materials. 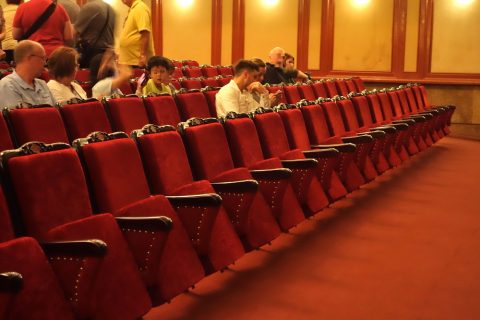 The seat I sat this time was A 17. It was the first row, but I didn’t feel tired looking up at the stage, and the view was great! However, because it was the fourth seat from the left side, there was a part of the left side of the stage that was hidden from view. 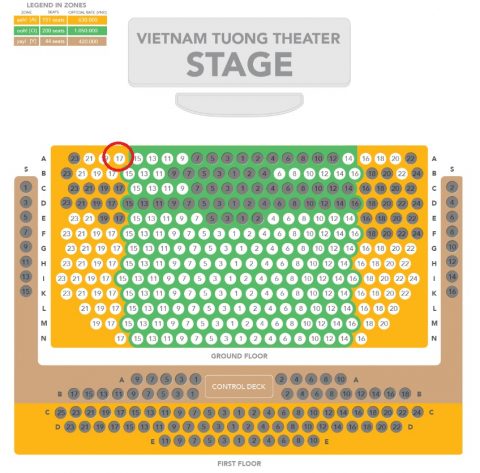 However, if you move even one seat to the center, the ticket price will almost double, so it might have been a good deal in that sense. Like the seat I sat this time, I recommend the boundary between the two categories. 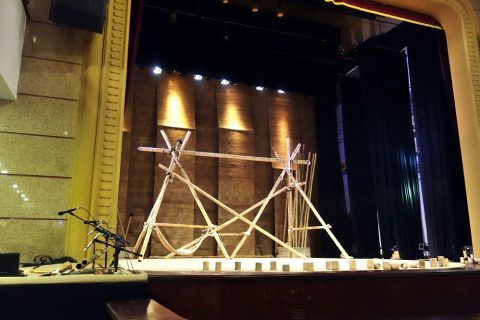 This performance is called “LANG TOI – MY VILLAGE”. With a traditional Vietnamese village as its theme, an acrobatic performance using bamboo is performed.

Photography is prohibited during the performance, so there are no photos, but please take a look at the official introduction PV. It was interesting and interesting to see a show that beautifully reproduced people’s private lives and activities in a warm village with a direction that I have never seen before!

Although it is difficult to understand in the PV, there were many scenes with a symmetrical arrangement centered on the center of the stage, and there were many scenes with rich colors while using a simple material made of bamboo. Because of that, I think the center of the seat looks more beautiful, but the price of the ticket is more expensive, which is the problem …。 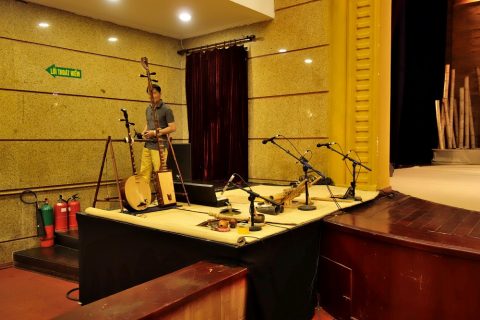 For the sound, folk instruments were played on both sides of the stage, and depending on the direction, the sound could be heard from the back of the stage. It is a live performance with a sense of realism, but it is a bit disappointing that more than half of the sound is heard from the speaker because it is picked up by the microphone. 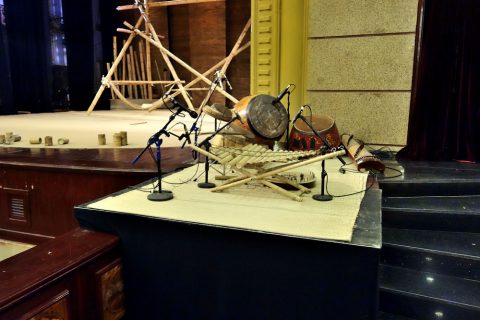 But the sounds of birds, the sound of water, the change of weather, and all kinds of natural scenes are reproduced, and their expressive power is amazing! As a composer, it was very interesting.

The artistic performance is worth seeing! 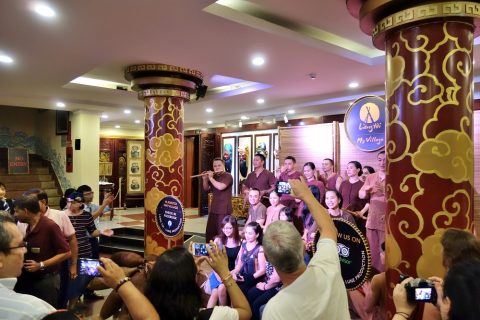 The performance takes about 1 hour and 10 minutes. When you go out to the lobby after the performance, all the cast will come out to see you off. Probably because there are many Westerners in the audience, the loud cheers are amazing! 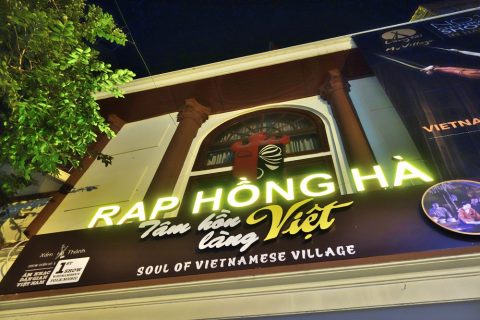 I watched “LANG TOI – MY VILLAGE” at Vietnam Tuong Theater, and it was a high quality and memorable performance! The ticket price is about 3,150 yen for the seat I saw, which is not cheap considering the price of things in Vietnam, but if you can see the Vietnamese tradition on the artistic stage, it is not expensive. 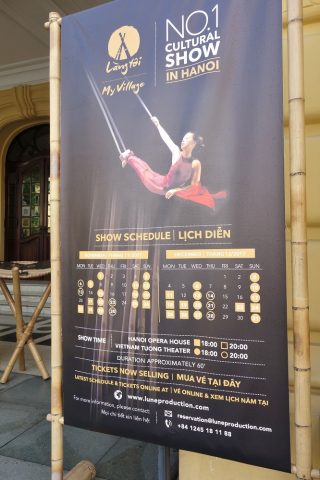 If possible, I wanted to see this at the Opera House …。 and this performance has been performed at the Vietnam Tuong Theater and the Opera House until December of this year, but it might be performed regularly because the above official PV was uploaded in 2016.

If you are planning to visit Hanoi, Vietnam, please enjoy this artistic stage.