After checking the tickets, we went from foyer to audience seats, but it was just like the original appearance and the interior was as magnificent as the concert halls in other countries. In addition, I would like to see the atmosphere of the social place, the customer class and clothes.

The foyer at the end of the ticket control is located behind the audience, but the white floor and ceiling form a gentle curve along the edge. 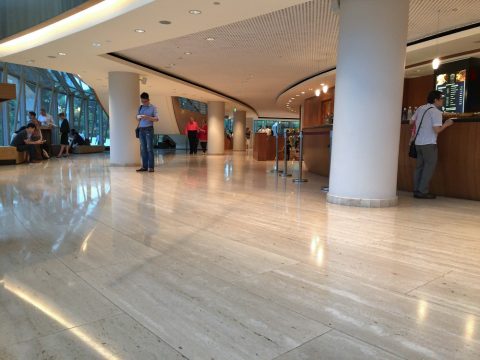 It’s about the same size as a general large hall, but I feel it’s a little small probably because of the low ceiling. There is a bar counter here, so it will be crowded during the break as a place to socialize (I’ll explain that later.). 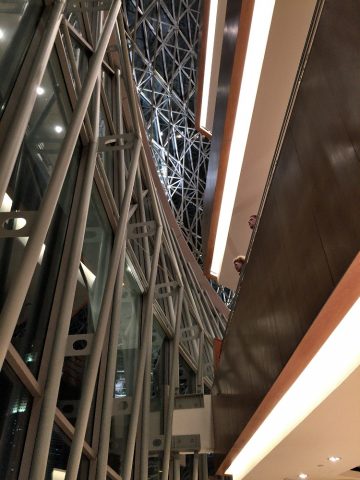 The ceiling of the lobby is low, but there is an open ceiling near the exterior wall and you can see the upper floors. It’s quite a dynamic scene. 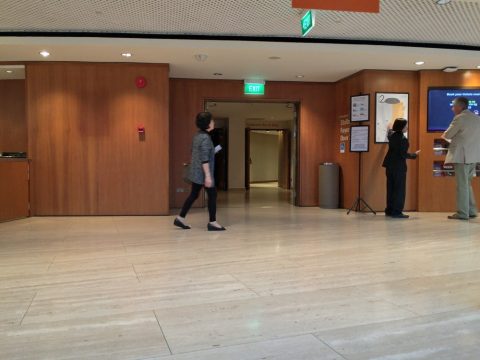 It goes into the audience seats from here, but the person in charge was also standing at the audience entrance when the theater opened for the first time to check the tickets. It seems that you can’t enter the auditorium unless you go through the appropriate door of your ticket.

There was still time before the show started, so I wanted to explore the hall, but now it seems a little difficult, so I would like to do the …。 expedition during the break time. 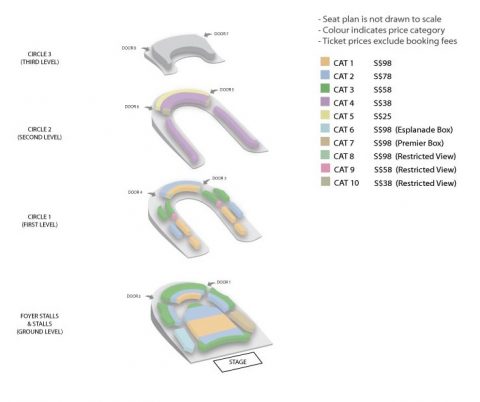 The seats in the Esplanade Concert Hall have a 4 level structure with Stalls (Hiradoma) and 3 Circles (upper floor seating). I bought a front seat of Hiradoma this time. 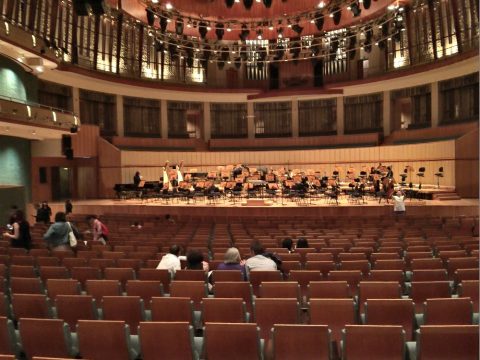 As I entered the auditorium, I found myself seated on a brand-new wooden floor, with a calming green base tone. The inner wall is green to match it, and I have a strong impression though it is a little unique. 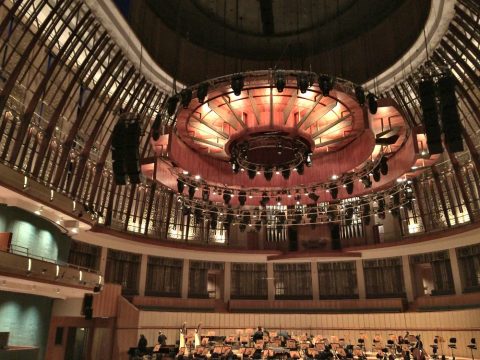 What surprised me most was the design of the ceiling! A novel item with many spotlights on a circular plate. The area around the center is used for indirect lighting. 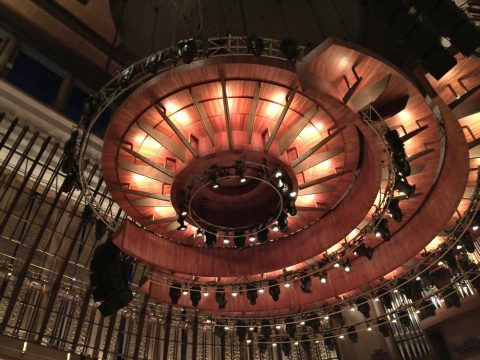 At first, I thought it was spiral like a snail, but when I came closer to it, I found that it was made by sticking multiple plates in line symmetry. I’ve never seen such an innovative tabletop before! 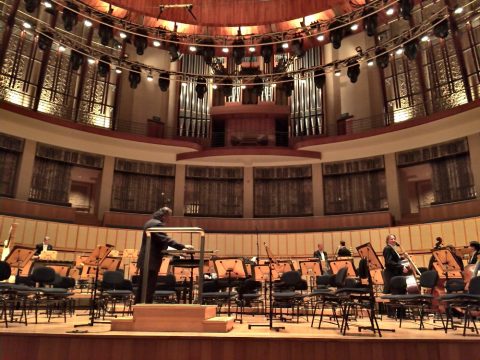 The back of the stage is pretty cool. I have never seen a stage where a pipe organ is integrated with a main plate like this before. 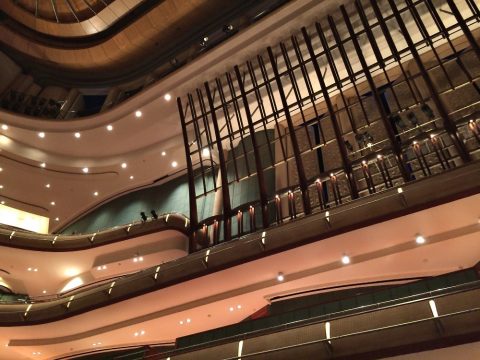 The feeling of looking up the upper floor is also wonderful! If you look at it this way, you can see that this auditorium is doing the “horseshoe shape” that you can see in the European Opera House. 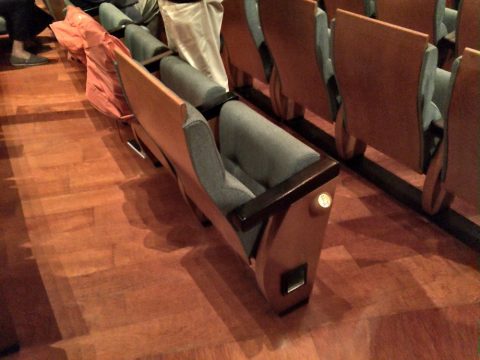 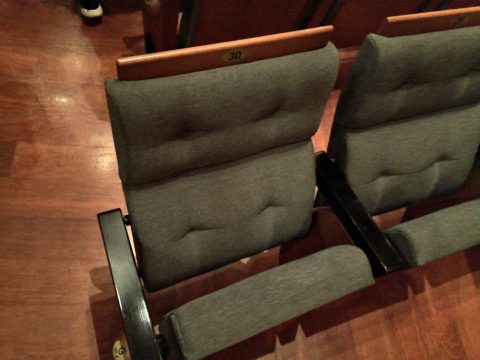 The seat is very comfortable. The width of the seat is standard, but the shape of the backrest is splendid and cushioning is good. My buttocks and lower back don’t hurt even if I sit for a long time. 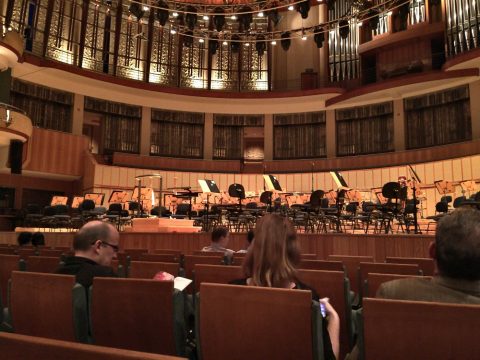 The view of the stage from this seat looks like looking up a little, but it doesn’t hurt my neck. However, it might be a little difficult for a big person to come forward …。 Maybe I was lucky this time, but the seat in front of me was empty. 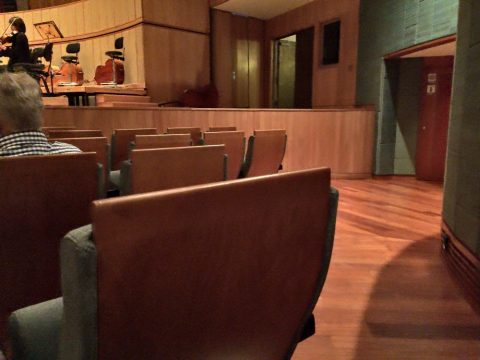 Also, although this seat is on the far right side, the fourth and subsequent rows of the flat dirt floor are narrowed down, so it is not so far away from the stage. Since it’s an aisle seat, it’s convenient to get in and out of the seats, and I think the aisle seat at both ends is a good choice in the flat dirt floor of this hall.

As for the sound, maybe because it is located lower than the stage, it feels a little bit muffled, but the sound is good. I could hear the bass in my eyes because it’s close to a contrabass, but I can also hear the 1st Vn without any problem.

Impressions of the Singapore Symphony Orchestra 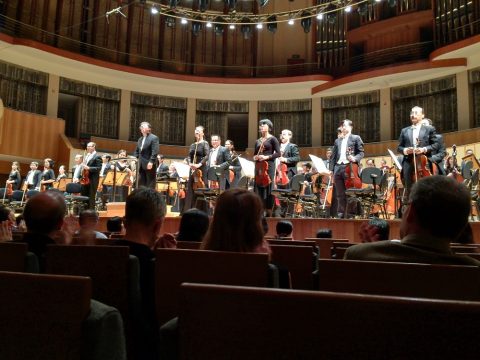 As for the performance of the essential Singapore Symphony, I listened to it this time and it was not bad. However, although the whole oche is well organized, the beginning of the sound often does not match, especially for wind instruments. There was no problem with harmony or balance, so I thought it was just lack of concentration? 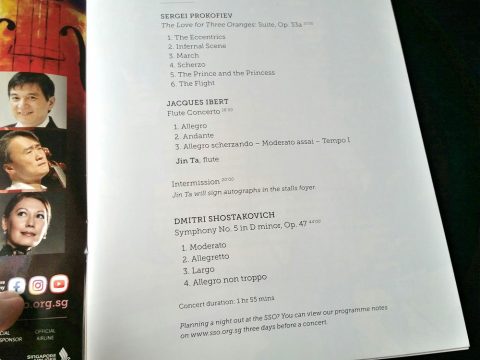 Here’s the program:. The performance has a sense of tempo, and the intervals between songs are almost perfect. Soloist JIN TA is quite a technician, and has no difficulty playing a superb technical melody, but the volume is a little low and not powerful.

There was no final encore this time, but in the encore of the soloist after the concert, the arrangement of J.S. Bach “Unaccompanied Cello Suite No. 1” prelude is a Jazz session with 3 members of band members Cb and Per. He was fascinated by not only classical music but also various talents. 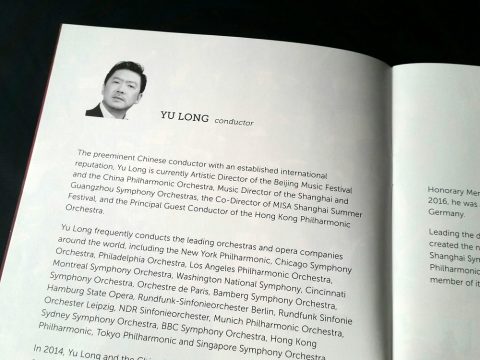 The conductor is YU LONG from China. In addition to working as a music director for the Shanghai Symphony Orchestra, he is also active as a guest conductor from all over the world, gaining fame worldwide. The speedy performance was uplifting and did not make me sleepy even after listening for a long time.

social space during the break, the audience and clothes 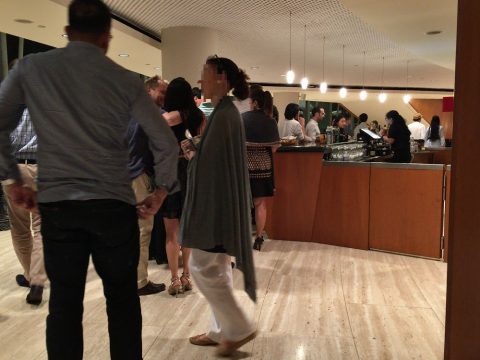 It’s time for a break, so let’s go and see how the lobby is doing. When I look at the customers, I am surprised that there are so many Westerners that I can’t believe that this is a country in Southeast Asia. Westerners who have moved to Singapore are probably enjoying social life by going to one of the few concerts ever held. 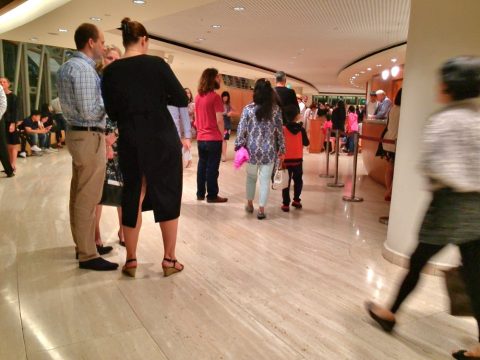 In terms of clothes, many Westerners wear shirts with collars or dressy clothes. But not all Asians were like that, and I saw many of them wearing half-length jeans. As long as it’s clean, it’s no problem to wear street clothes. 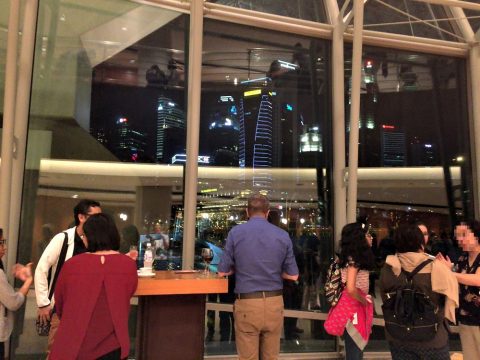 From the lobby, you can enjoy a panoramic view of Singapore’s night view and the skyscrapers in the direction of Laffers Place. It’s nice that it has an urban atmosphere. 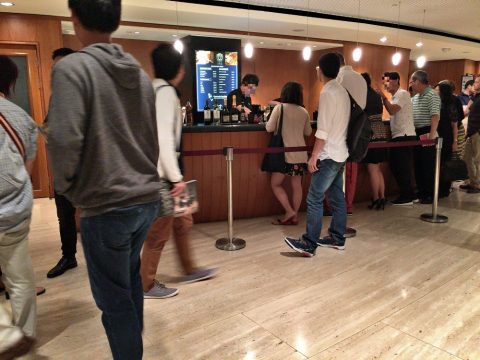 There are two bar counters on this floor. It was not as long as Western opera houses, but there was a long line. 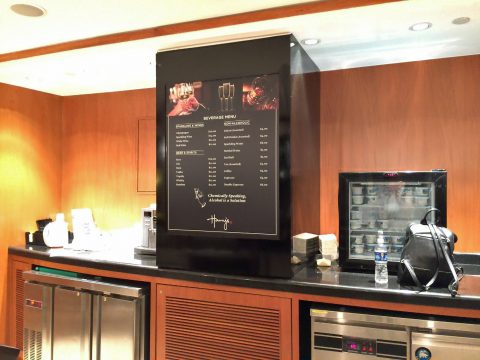 Drinks are mainly hard liquor. Champagne is $20, red and white wine is $12, and beer is $10, all comparable to the prices of London and Paris Opera House. Soft drinks are mostly around $4 and there seems to be no snacks such as sandwiches. 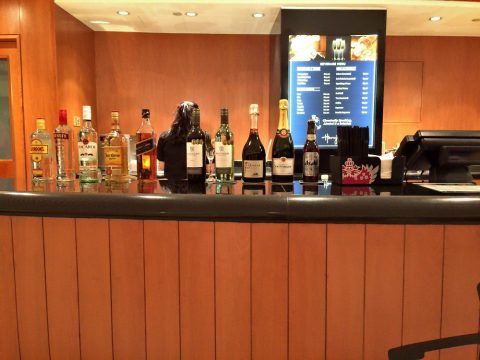 If you look at the brands, the champagne price is about 4,500 yen at TAITTINGER (Tetanger) and the red and white wine is MCGUIGAN (McGuigan) and the price is just under 2,000 yen. The beer is Asahi Super Dry! I didn’t know Japanese beer companies are operating in this area. 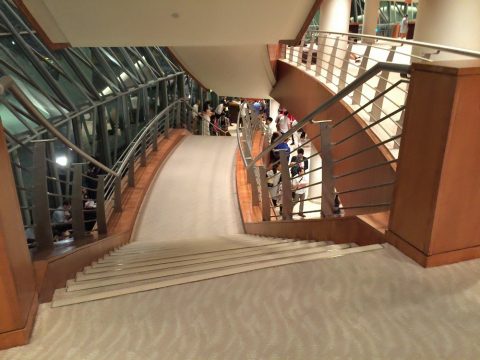 Next, let’s go up the stairs and go upstairs. 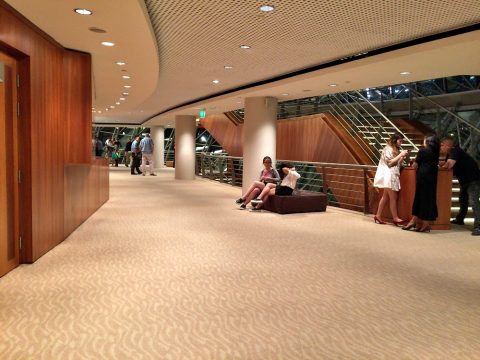 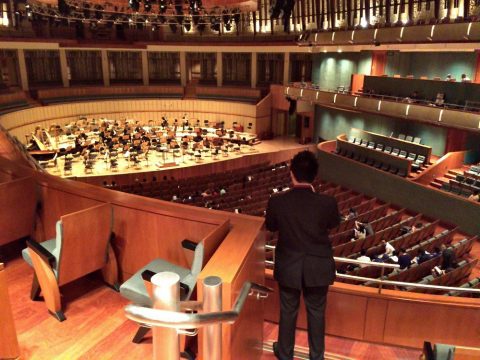 It looks like this when I look at the audience. Although it is a balcony seat on the second floor, the view is not bad because it is not so far from the stage. I think some people prefer this one to the first floor seat because they can see the whole stage without any difficulty. Even though it is a second-floor seat, the first seat in the center is in the 1st category, so it is natural that it is a good seat.

Also, there was a person in charge here, but there was no ticket check like when the doors opened.

Classical concert in Tokonatsu no Kuni 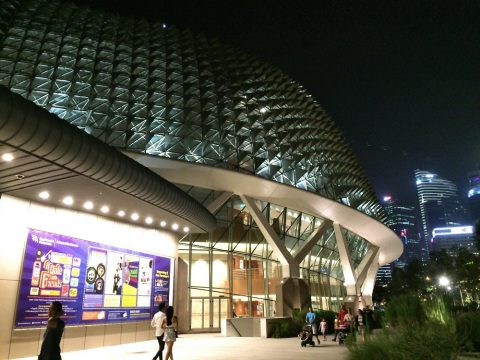 What do you think of the two concerts by the Singapore Symphony Orchestra and the Esplanade Concert Hall? In the beginning, I thought that a concert hall in Southeast Asia would not be a big deal, but it turned out to be great. These innovative concert halls in Singapore are worth seeing.

The ticket price is also cheaper than in the West (Except for London), and it is reasonable that you can watch it for around $100 or less than 10,000 yen in the 1st category. The strength of the orchestra is not bad, so even first-timers should enjoy watching a classical concert in a tropical country.