Dubai Fountain is a fountain show of light and sound that takes place every day in a man-made lake in the downtown area of Dubai, UAE. It is one of the world’s largest entertainments and is known as one of the main attractions of Dubai tourism.

I went there several times during my stay in Dubai, and the fountain show was quite impressive! Here are some of the highlights of Dubai Fountain, as well as some of the more secluded spots that are less crowded and more relaxing. 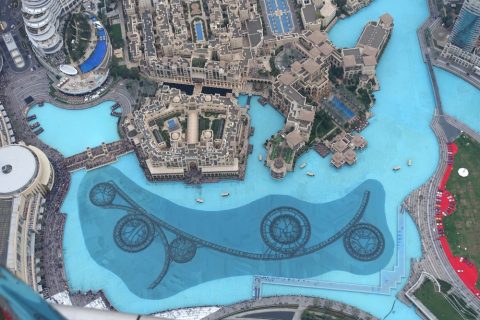 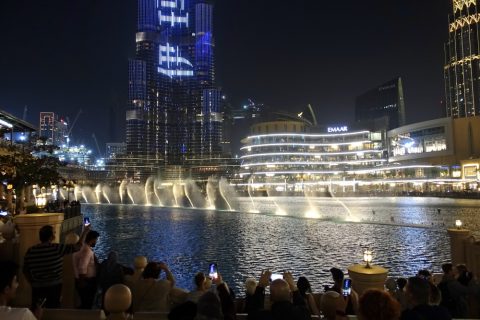 It is held during the day, but it is lit up at night, so it is several times more beautiful! You can see it from anywhere on the lakeside, but the Dubai Mall in particular is very crowded, so if you don’t stand by for a long time, you won’t be able to see it easily. 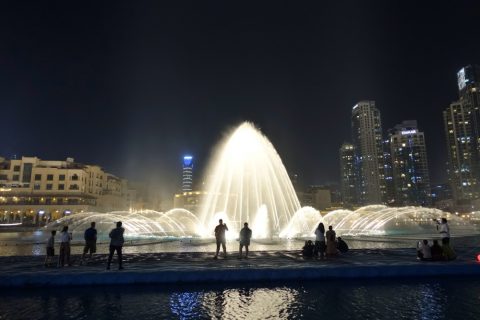 The fountain show lasts about five minutes. At first, it starts silently with the songs played from speakers set up at various places along the lake, and then the water becomes intense like dancing. The number of songs is not the same every time, but several songs seem to rotate. 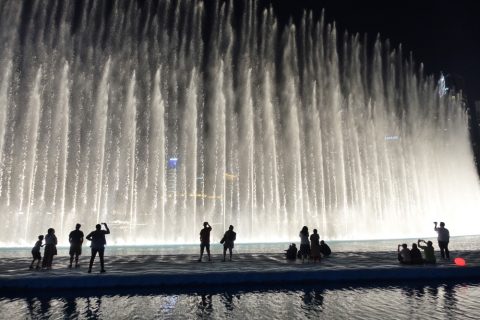 The fountain can be as high as 150 meters, so it’s quite impressive! However, depending on the song, there are many cases where it is not so expensive, so I felt that it is rather a fountain show that should be seen from an artistic point of view. 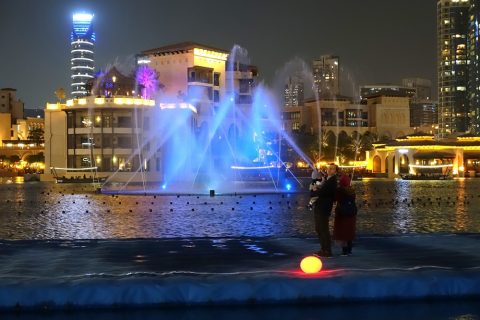 There are more than 6000 lights to illuminate the fountain, but most of them are all white. Sometimes we see blue and red light up, but we hardly see it at the climax.

Well, to put it better, it’s quaint and emotional, but I personally think it’s good to have more colorful illumination. 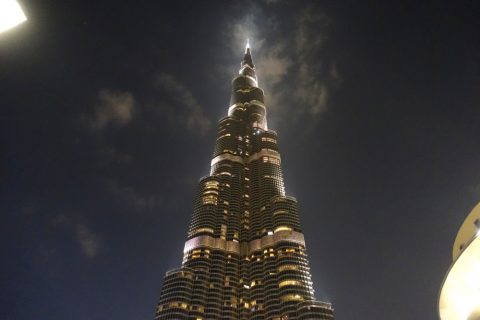 At the same time as Dubai Fountain, the Burj Khalifa standing right next to the mountain is lit up. The entire 828 meter tall building is a giant LED screen that can display various images in conjunction with the fountain show. 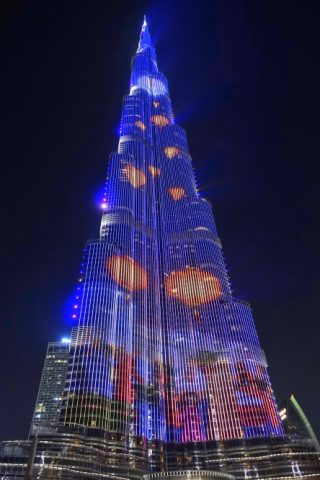 When you watch the video, you can see animations depicting various cultures and people from around the world, but there seems to be no particular theme. It was a huge screen with a height of 800 meters, and when I looked at it closely, my head almost cringed. … 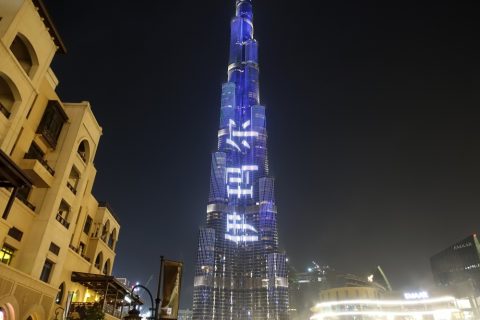 The colorful and vivid images are impressive, but I am very concerned that the words displayed between the images are Chinese as well as Persian. As for the video, all the characters are wearing Chinese traditional costumes, and the content is very Chinese.

Probably a lot of Chinese money has gone into the construction of Burj Khalifa, but now, no other country in the world can do without China … 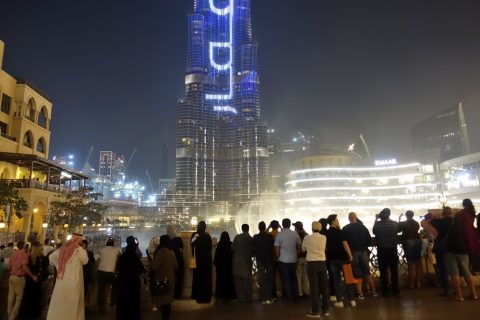 By the way, if you look at Dubai Fountain from the east side of the lake, you can enjoy the collaboration with the images of Burj Khalifa. But I don’t know if everyone thinks the same thing, but it’s so crowded that it doesn’t look that easy …

“boardwalk” will be soaking wet! 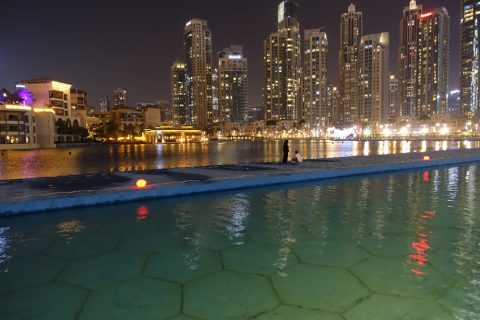 Another place that is attracting attention as a place to view Dubai Fountain is “boardwalk”. This is a special promenade built in the lake, and it is one of the attractions where you can see the fountain up close. 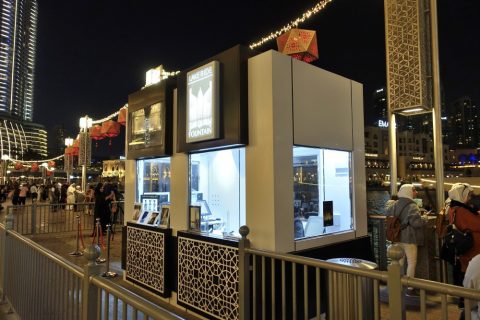 Entrance fee is 20 DH. There is an entrance on the north side of the lake. Once you enter, you can stay for an unlimited time, but there is nothing to see except the fountain, so most people enter 5 minutes before the show starts. 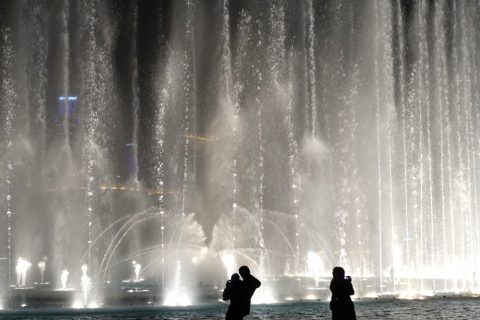 The distance from here to the fountain is only a few meters! As the fountain of over 100 m height wiped out in front of me, I think there is nothing to complain about the impact, but depending on the direction of the wind, not only the splash of water, but also the water that was wiped out might fall down, so when I looked from the end, everyone was soaked! 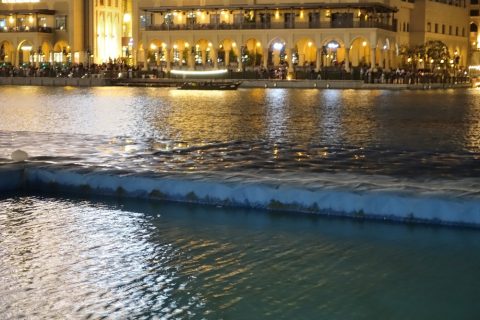 The water pool after the show clearly shows the effect. It is recommended for those who are looking for a cool day in Dubai, the country of perpetual summer (lol)!

It is a great spot with few people! 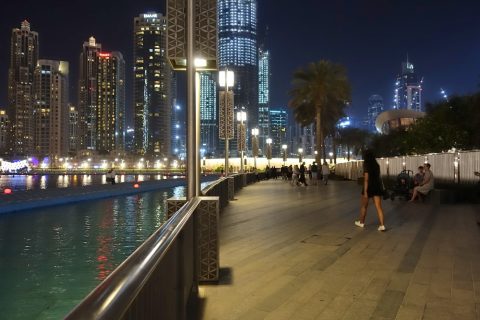 I found a recommended viewing place in the midst of that! Right next to the Boardwalk entrance, you can see Burj Khalifa nearby, but this is a little-known spot that is always empty even though it is close to the fountain! 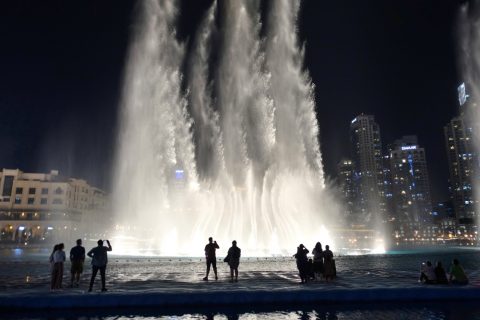 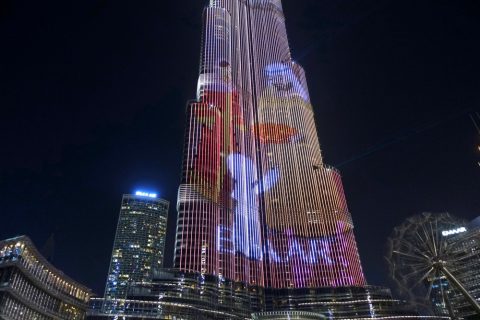 Of course, you can’t see the Burj Khalifa until you look back at it, but personally, it’s not that big of a deal, so I don’t think you need to see it with … especially the fountain.

As for the LED vision of Burj Khalifa, there is no problem if you can watch it at the time of Dubai Fountain (15 minutes and 45 minutes per hour).

when viewed from the observation deck of Burj Khalifa… 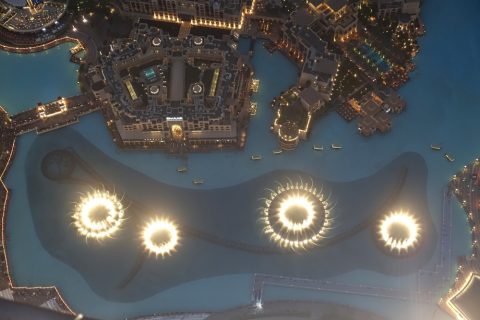 There is also an observation deck at Burj Khalifa in Dubai Fountain. When you actually go there, you can see it from a different point of view from the ground, which is interesting!

Once you get to the 148th floor, it’s so far away that you don’t know what’s going on, so I recommend you see it on the 124th floor! 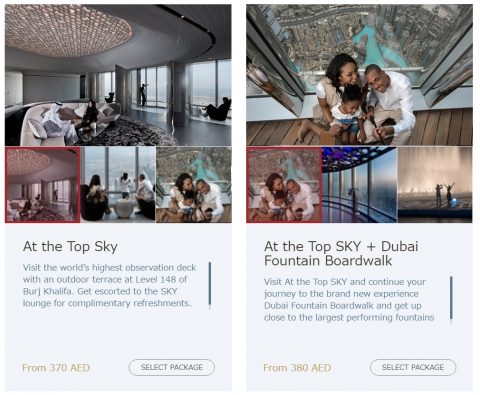 By the way, the ticket of At the Top SKY of Burj Khalifa has the plan with the board walk ticket mentioned above. With this, you can get in at a discounted price, so it might be good to watch Dubai Fountain after watching the night view from the observation deck. 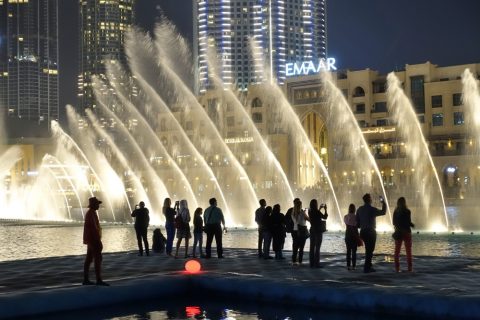 There are other places to see it if you look for it. It is held over a wide area of the lake, so even if one place is crowded, I think there is a vacant place somewhere. It is held every 30 minutes, so you don’t have to worry about missing it.

Here are the highlights of Dubai Fountain and the best places to view it!

This time, I tried the camel meat burger at the restaurant...

Jumeirah Mosque is the largest and most beautiful mosque i...

Dates are dried dates. In Dubai, UAE, dates of a high-clas...

"Dates" is a dried fruit of the date palm that is popular ...